In the wake of Hurricane Sandy, Warrie Price, Founder and President of the Battery Conservancy helps bring the gardens back on track. 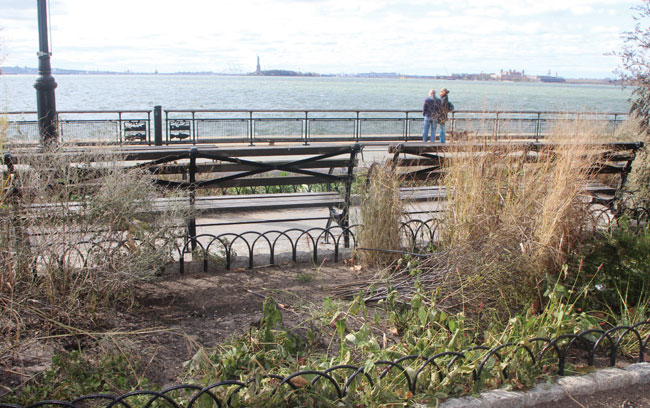 NYC&G: What sort of damage did Sandy cause at the Battery gardens?
Warrie Price, founder and president, the Battery Conservancy: The saltwater came up 13 feet over the seawall, and we had to flush out not just the salt, which is harmful to plants, but contaminants as well. We lost our last American elm, near the playground. The damage also extended to our offices across the street. We lost our archives, library, founding papers, videos . . . everything!

How did you recover?
We immediately reached out to horticulturalists in New Orleans to learn from their experience with Katrina, and they recommended that we rinse out the saltwater from the plants and soil. At that point the sprinklers had been shut off, so in order to rinse off all the salt, we had to get the plumbers to turn the system back on and trucks from the Parks department to spray water. We saved all the plants we could. I wasn’t willing to give up on 10 years’ worth of plant stock!

What steps are you taking against future storms?
Well, nature is always in charge, and while the gardens were planned to withstand flooding, we will look for even better salt-tolerant plants. Once we go through a whole year’s growing cycle, we’ll assess what survived best and take it from there.

When did you first become interested in the Battery gardens?
Betsy Rogers, who created the Central Park Conservancy, asked me if I’d be interested in starting a conservancy for the Battery. I had been on the mayor’s waterfront task force for two years, and knew the area well and saw the potential. We have raised more than $121 million since we started the conservancy in 1994. 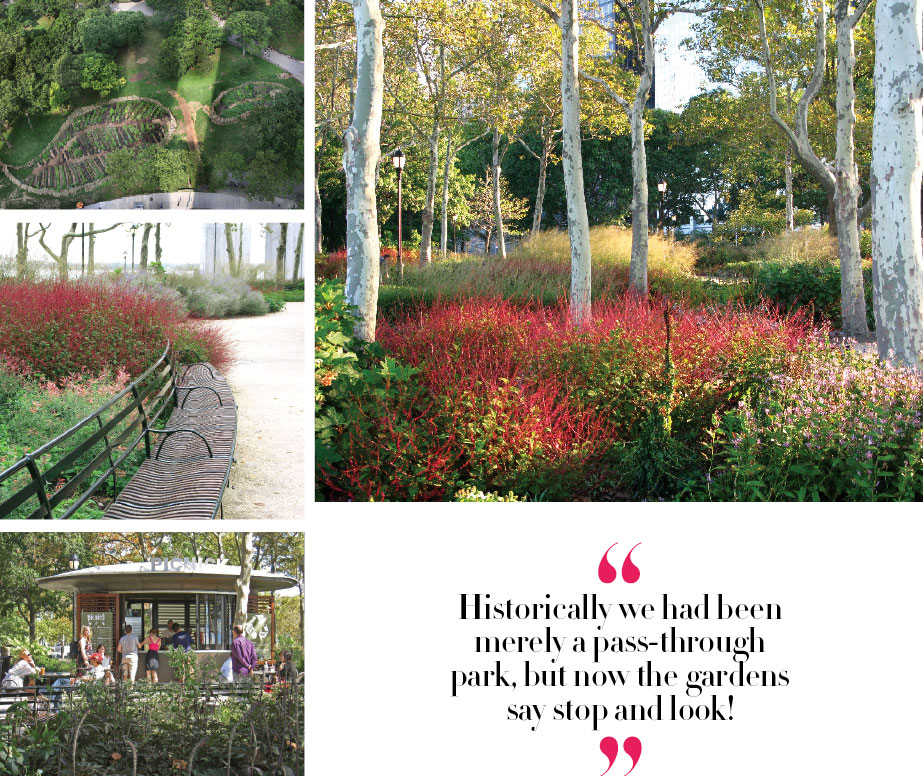 Who designed the gardens?
The Battery Conservancy commissioned Dutch designer Piet Oudolf to create the horticultural master plan. We started with the Gardens of Remembrance in 2003, which were his first gardens in the United States.

What was the original mission of the gardens, and how has that changed?
To stun people with beauty. Historically we had been merely a pass-through park, but now the gardens say stop and look! At the outset I had no idea the area would become a huge residential community, and that by 2012 we would be growing food on our urban farm. Today there are 12 elementary schools below Canal Street. I began the gardens to change how the world sees New York, and now there are more strollers coming through the park than tour guides!

What should visitors look forward to this year?
We’ll be opening the Battery Green, a three-acre town green with a quarter-mile walking path around it. The first leg of the bikeway that connects the East Side to the West Side will open this spring. And we’re in the midst of evaluating almost 700 entries for our chair competition, from which we’ll choose the perfect portable chair for use on our 23 acres. This is really an urban nexus for horticulture, a park like no other.