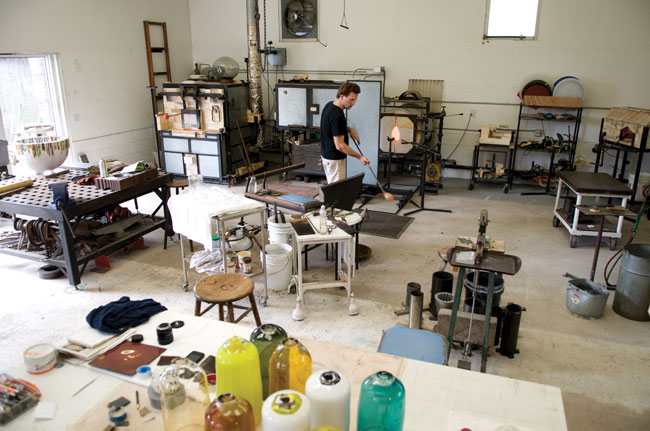 In the mid-1980s, Andy Stenerson got his first taste of glassblowing and “fell in love fast.” As a student at the Cleveland Institute of Art, he became fascinated with the craft, and decided it would be his career after watching experts William Morris and Dale Chihuly blow glass during a special lecture. “I was awestruck by how easily glass could be manipulated,” he says. “Their vessels were so beautiful—and quick to make.”

Over the years he honed his skills, learning from renowned Venetian glass masters Pino Signoretto and Lino Taglipietra (the latter a friend and collaborator of Chihuly’s), and casting glass in Oakland for the artist John Lewis. A nearly decade-long stint in Brooklyn followed, during which he did commercial work (“One of my first jobs was blowing glass ice cubes for a print ad,” he says with a laugh) and set up a studio in South Williamsburg. In 2002, he decided to move his growing family to the East End, where he built a 1,000-square-foot studio in Amagansett. Here he does custom work for interior and lighting designers while crafting his own line of vases, ornaments, and sculptures for Bridgehampton’s Comerford Collection.

Stenerson first fashions “blanks,” or basic shapes (sheets, cylinders, spheres, discs), out of molten glass on the end of a blowpipe. Once they’ve cooled down, he modifies them, employing tools that look like large shears, tweezers, and paddles to grind, stretch, score, cut, snap, and flatten. Through several cooling and reheating processes, while aiming for a consistency that’s “somewhere between blown glass, stained glass, and fused glass,” Stenerson reworks and fuses the pieces. He creates colorful, intricate designs through the use of handmade canes (colored-glass rods), particularly murrini—which reveal complex patterns when cross-sectioned. For added texture, he often incorporates different metals, like silver and gold leaf.

So how has Stenerson’s decades-old fascination with glass never gone stale? “Each piece I do feels like a new crush that either goes the distance or doesn’t,” he says. “But I can pick it up ages later, turn it 90 degrees or alter it, and it’s fresh again. Plus, it helps that I have a lot of storage.”