Cherished pieces take on a new life in juxtaposition with fresh surroundings.

Excerpt from Through a Designer’s Eye: A Focus on Interiors (The Monacelli Press) by Matthew Patrick Smyth 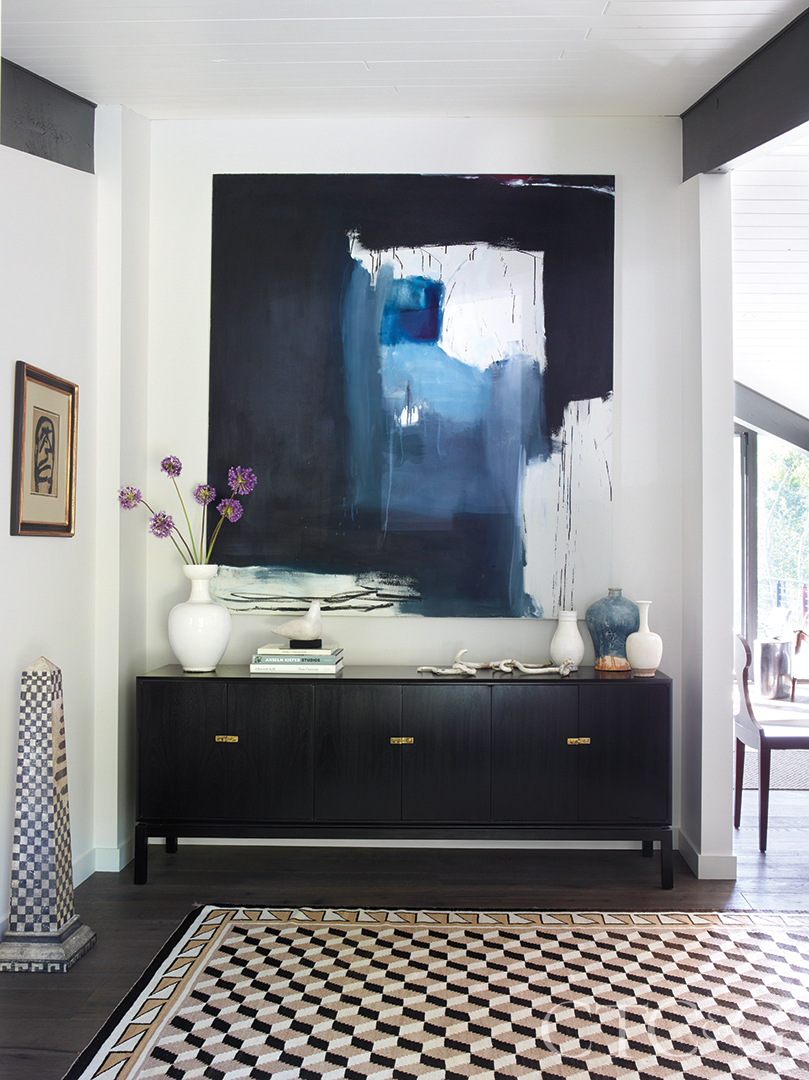 A few years ago, Jean, my partner, and I started to feel that we wanted to simplify our life in the country. Watching the real estate ads, as I always do, this one-story house built in 1976 caught my eye for several reasons. First, nestled into the trees with the mountains behind, it sat beautifully in the landscape. Second, as a prefabricated “deck house,” it belonged to an interesting strand of midcentury design history. (The company that designed and produced it survives today as Acorn Deck House.) Third, it had very good bones, which made for lots of interesting possibilities for a renovation.

Like all the deck houses of its period, this one came with a wood ceiling, exposed joists, and lots of wood paneling. (The owner, an airline pilot well- known and loved in the area, had made it into a bachelor pad with shag carpets, a large bar, a Jacuzzi, and a sauna—all cool in their day, but not for us.) The floor plan was basic, essentially seven rooms and a basement. By the time we added a new garage, pulled down a few walls, and refocused the spaces on the views, the house was the same size, but much more open. 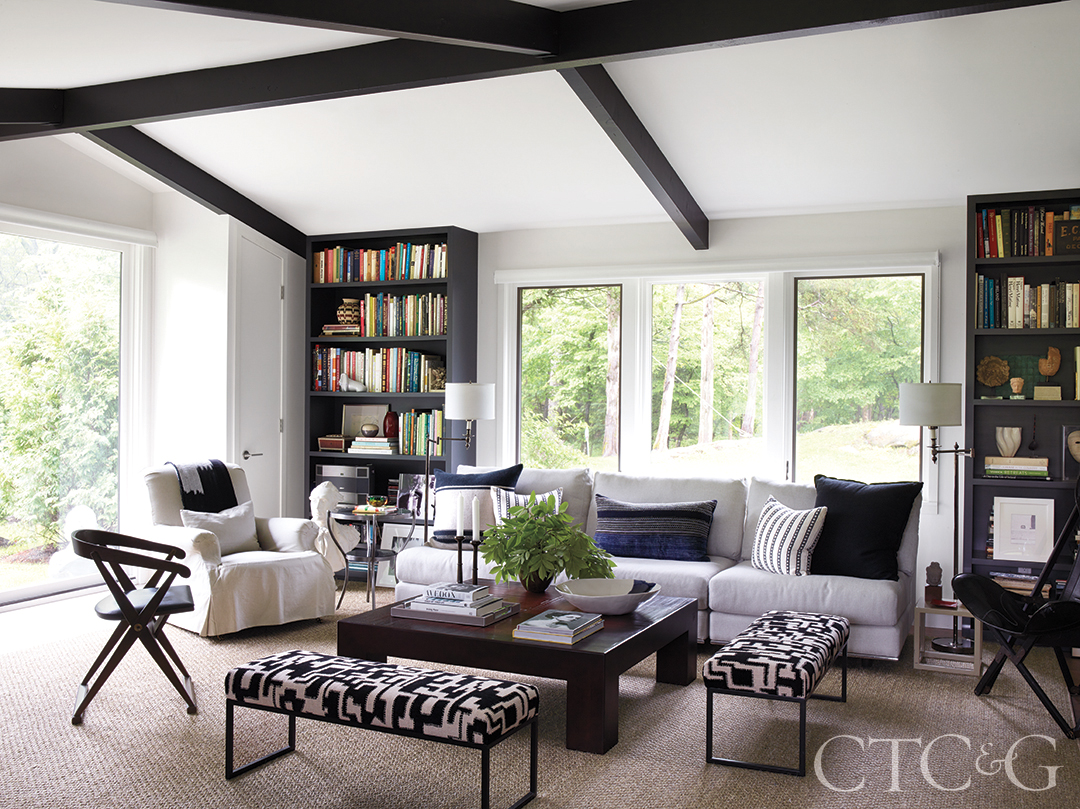 Creating a new front entrance, though, was step one. With the old house, the front door pushed into the living room. Instead, I wanted a contained space—an enclosed transition area to remove coats and boots—that would heighten the surprise of walking into the great room, a living/dining area fronted by a glass wall that opens onto a deck and the vista beyond.

To the left of the great room, we put the master bedroom, Jean’s office, and two baths. To the right, in what used to be the laundry, we installed three doors; one opens to a bar, another to a closet, and a third to the former garage, which I transformed into my home office.

I also completely redid the kitchen and reorganized its flow so it had two entrances. To tie all the spaces together further, I used only three colors on the walls: a dark gray-green, and two shades of white, one of which was used for the trim throughout. The rest of the color comes from the furnishings, objects, and artwork.

While the renovation was still underway, someone asked if I were going to do the rooms entirely in midcentury modern or maybe use only pieces from the 1970s. That would have been too obvious a solution. Part of the fun for me was exploring how to use a modern frame to highlight furnishings and objects from other periods and places. 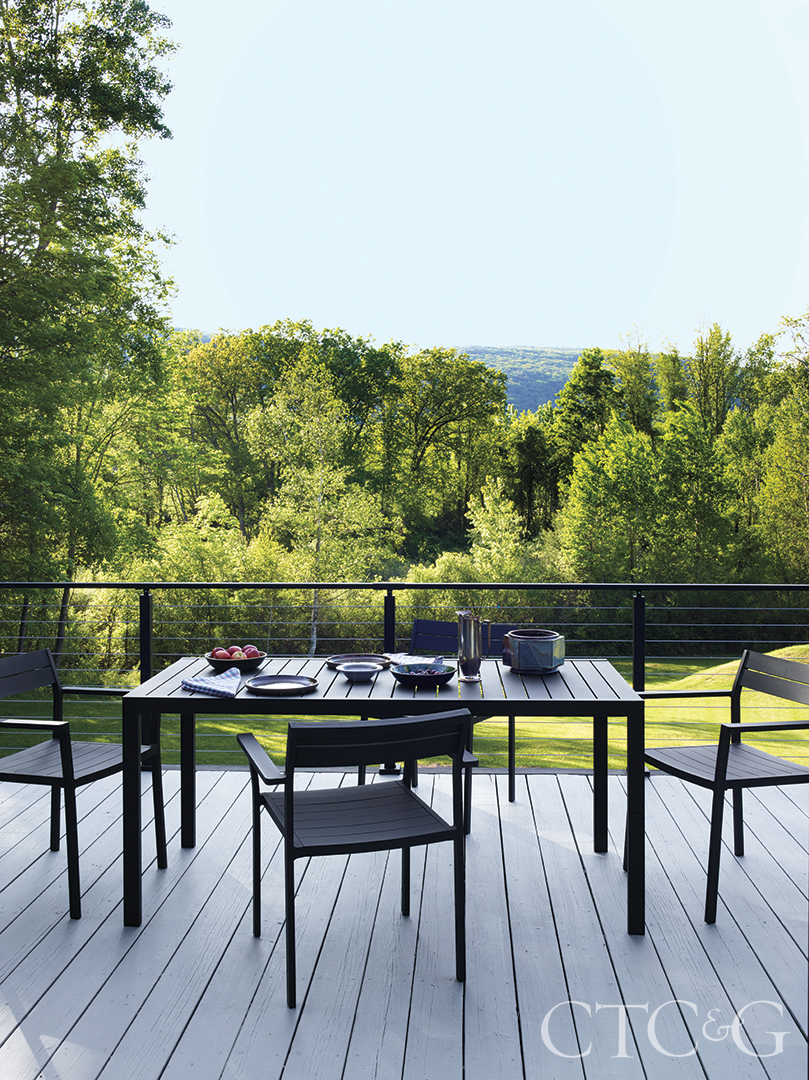 My much-edited blend included some pieces I have loved for years, such as a nineteenth-century mirror that first drew me into the world of interiors, and an eighteenth-century Irish console that was the first important piece I purchased for my first client after I had launched my firm, and that she gave to me as a housewarming gift when she decided to downsize. This mix also welcomed others that have more recently caught my eye: an antique Korean chest, a Navajo rug, and a prototype Italian chair from the 1960s. All the pieces have taken on new life in juxtaposition with their fresh surroundings.

This house is about us right now. It is different from our last house, which was about us then. We all evolve.

The print version of this article appeared with the headline: Changing Scenery. Subscribe to C&G