This being the last few weeks before everyone takes off for their cottages in the Hamptons and family compounds in Maine, Michael’s was chock full of A-listers, including Barbara Walters, Arianna Huffington and a squadron of social types. I was joined today by Marianne Howatson and Kendell Cronstrom and we had plenty to talk about. I’ve known Marianne since her days at Condé Nast where she was publisher of Travel & Leisure and Self. She then went on to be group publisher of Gruner+Jahr. These days, she is CEO and publication director of three gorgeous shelter books: CTC&G (Connecticut Cottages & Gardens), HC&G (Hamptons Cottages & Gardens) and the company’s newest edition NYC&G (New York Cottages & Gardens), which launched in March.

Marianne bought the books in 2009 because she says, “I was in love with the magazines.” And, it seems, she’s not alone. “Every house I go into in the Hamptons, the magazine is right there on the table. It’s wonderful to see.” The appeal of the books lies in their “sense of place” and the feeling of “intimacy” that connects the reader to its design-focused content, explained Marianne. The books’ affluent, passionate readers with a median household income of $880,000 and the company’s event-driven marketing efforts have made it the advertising vehicle for luxe lifestyle brands, like Hermès, Scalamandre, Ligne Roset and Roche Bobois.  NYC&G, with Kendell at the helm, has been so well received that Marianne decided to up the print run by 25 percent, increase the frequency from five to six times a year, and sell the book on the newsstand for $5.95. In the era of the $12 print subscription, Marianne’s asking price of $99.95 for all three titles is truly a vote of confidence for the future. 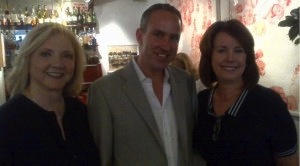 It’s clear that Marianne has set the bar high on all fronts. This year, the stellar roster of events the company has sponsored is truly impressive. In Connecticut, its Innovation in Design Awards have been recognizing the area’s leading architects and designers for six years. The magazine also sponsored the Red Cross Ball and created Pink Aid, a brilliant initiative to raise money for breast cancer awareness in partnership with Mitchell’s of Westport. The luncheon features a collection of pink chairs artfully adorned by a host of designers, which line the front row at a fashion show of a top designer. Guests pay $1,000 to sit in the chairs, and afterwards, they are available for sale. Last year’s event raised $330,000 for area hospitals. This year’s event is scheduled for October 4 and will feature a Ralph Lauren fashion show. CTC&G Editor D.J. Carey has also redesigned the book’s logo for September, which, explains Marianne, will “open up” the cover, giving it an airy, more modern feel.

In the Hamptons, HC&G’s July 1 cover has a stunning shot of Cindy Sherman in her most shocking incarnation: nearly unrecognizable with a fresh face and wearing white jeans at home in Sag Harbor. The book had an impressive presence at ArtHamptons two weeks ago where its all-white VIP tent sponsored by Ligne Roset boasted a Jackson Pollock exhibition. In August, the pub is one of the elite sponsors of The Hampton Classic where Kendell will judge a design competition to select the most to-die-for tables in the VIP tents on the final weekend. HC&G also launched its own Innovation in Design Awards in East Hampton two years ago. Whew!

Having begun his career at Vanity Fair as assistant to executive editor Wayne Lawson, Kendell tells me he was always drawn to shelter magazines. His love affair with design began back in childhood when he loved to roam around looking at the beautiful architecture of the homes in his Minneapolis neighborhood. Having had stints at Elle Decor with Marian McEvoy (“My training ground”) and InStyle, he developed an unerring eye for what’s chic, new and next in interior design, and his sleek, authoritative editorial style is an eclectic mix of traditional and modern design. With readers who are “comfortable and confident” about design, he’s got to aim high. For NYC&G, he’s endeavoring to feature the best in interior design from New York and the Hudson Valley in all forms from “the cottage with a babbling brook” to an “art-filled apartment in UN Plaza” to a “whitewashed loft in Cobble Hill.” He tells me, “The possibilities are endless.”