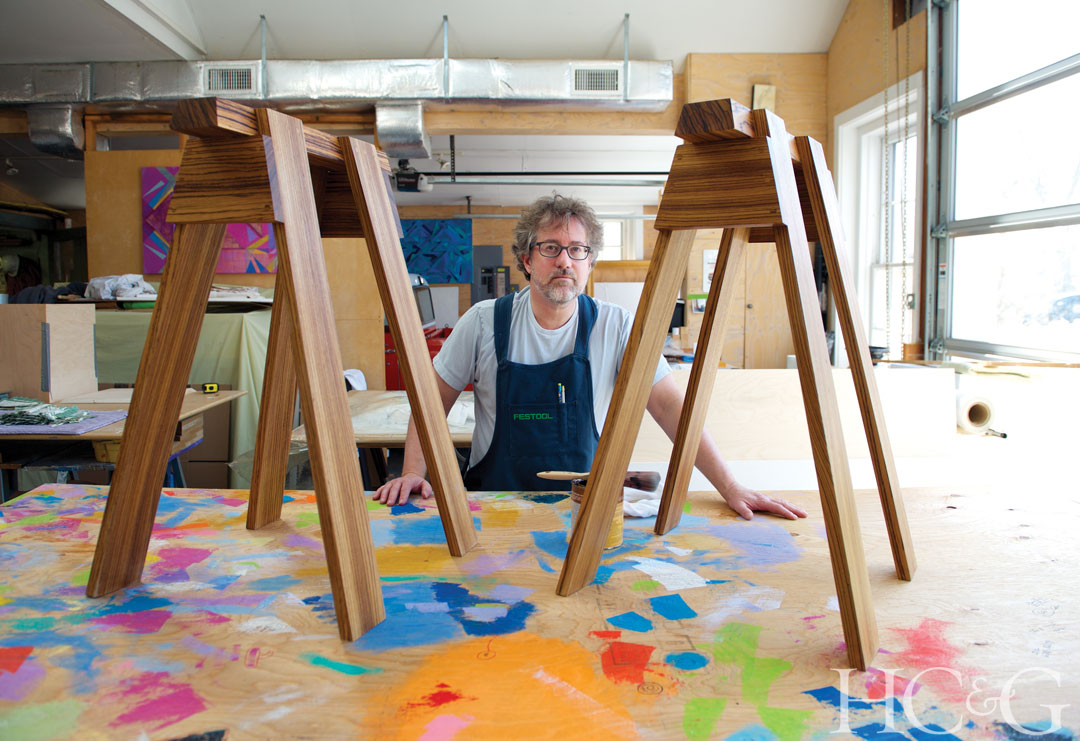 As a child, Gavin Zeigler was always up for an adventure. “I liked the act of discovery,” he recalls, giving a tour of his Shelter Island studio, once an automobile service station on North Ferry Road. “I still do.” The young Zeigler avidly collected fossils, old papers, keys, and coins. “I’d put pennies on the railroad tracks to see what would happen when a train came through, and then I’d make things with them.” 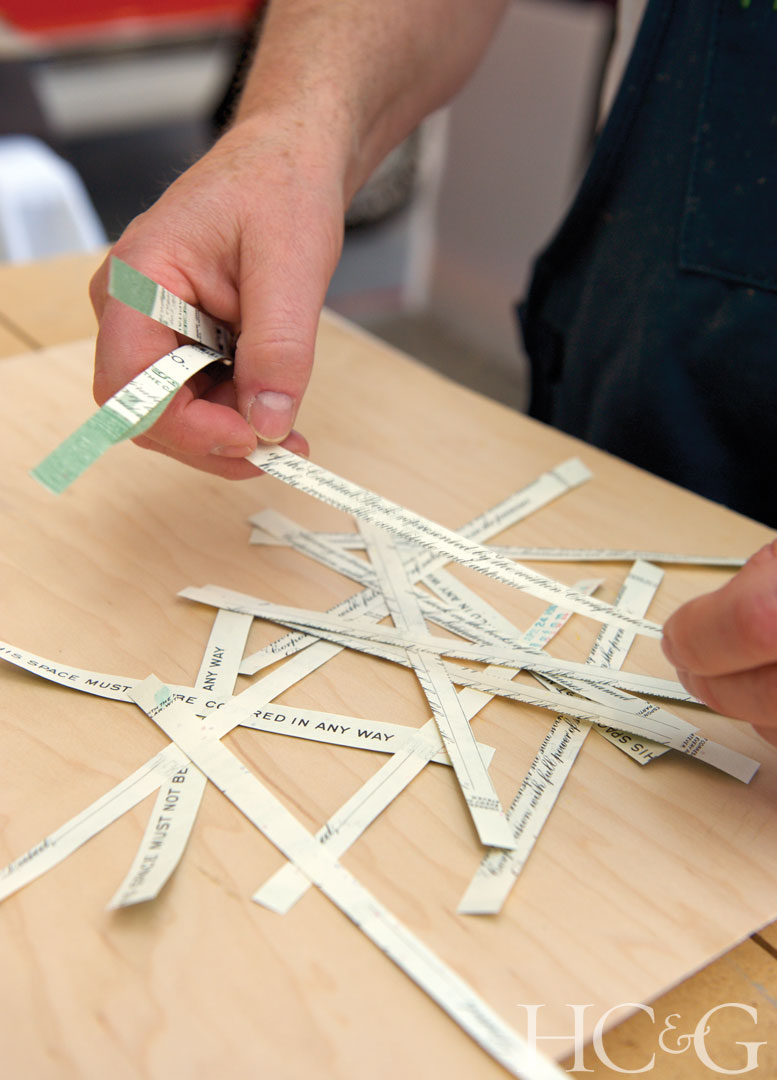 An abstract painter and sculptor by training—he’s represented by the Peter Marcelle gallery on the East End and Gerald Peters Gallery in Manhattan—Zeigler has also become a highly regarded wood craftsman and furniture designer during the past decade. He and his team, including master carpenters Wayne Koons and Brian Eckley, have produced custom consoles, tables, shelving units, and decorative storage boxes for top interior designers such as Thom Filicia, Jamie Drake, and Kerry Delrose, and he is particularly well known for his Saw Horse tables, constructed of mahogany, afromosia, ebony, or zebrawood and topped with glass.

Zeigler, whose infatuation with all things legal tender has led him to create a series of “penny paintings,” in which he affixes pennies to canvas and paints over them, has recently begun experimenting with money in other ways. He’s currently designing a line of cube-shaped tables, made from furniture-grade birch-veneer plywood and covered with shredded stock certificates. Having pre-cut roughly 250 such documents into quarter-inch ribbons, Zeigler glues them to plywood panels in a collage-like arrangement, moving quickly as he works, since the epoxy dries within an hour and a half. He then places the panels into a bag press for 24 hours—essentially vacuum-sealing the layers of stock strips and glue. Next, he cuts slots into the panels’ mitered edges to accommodate biscuit joints, which are secured with more epoxy or wood glue, and constructs the table, finishing it off with a fine sanding and a coat of varnish. 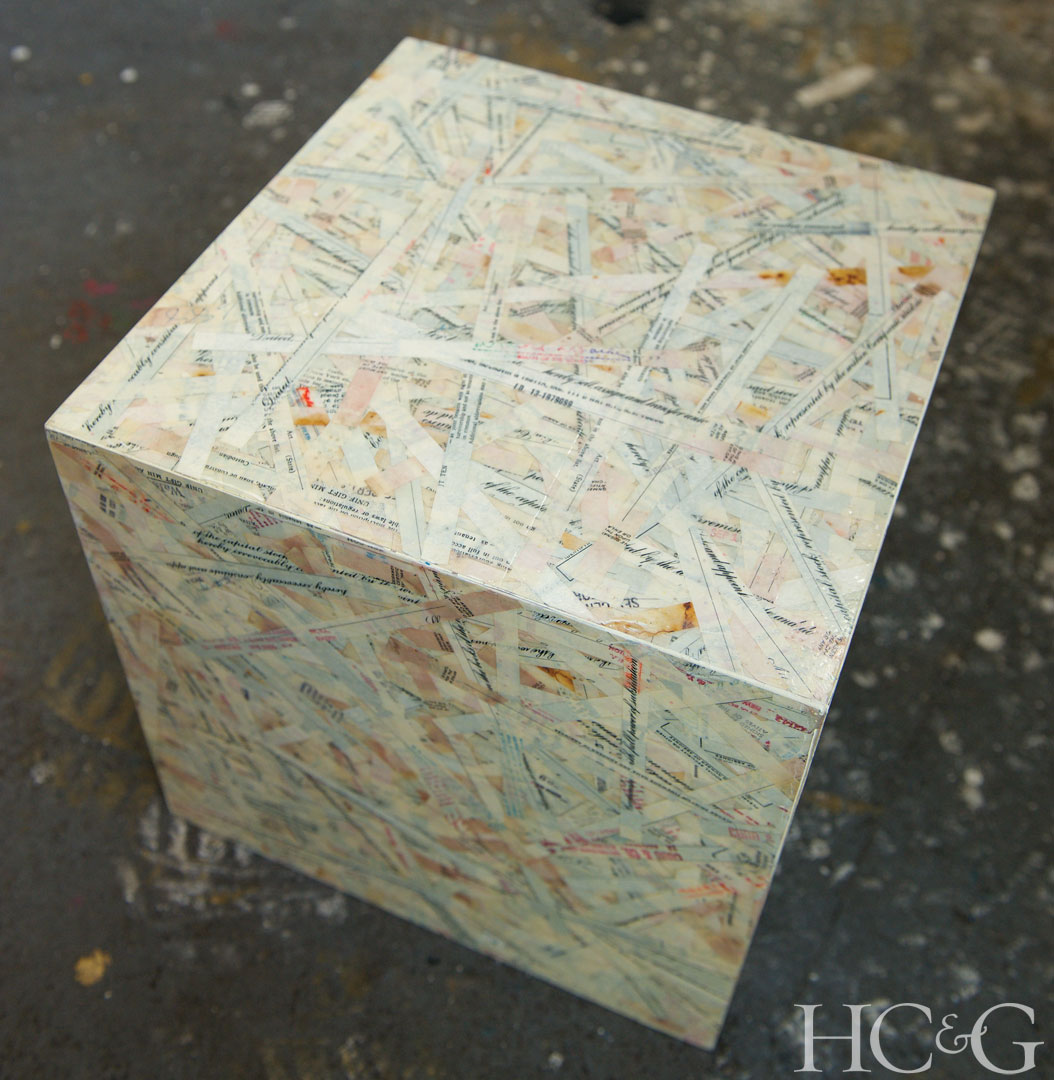 Although Zeigler could cover his cube tables with any type of paper, he’s particularly drawn to old stock certificates. (He has about 40,000 of them, purchased from a friend and warehouse owner in his home state of Tennessee.) They not only add a physical layer to his collage work, he says, but also layers of meaning. “I like objects that have been touched by human hands and have a sense of history to them,” Zeigler comments, pointing out the documents’ handwritten and typed letters as well as various stamps and seals. “I think things that were once valuable but aren’t any longer are especially intriguing.”

A version of this article appeared in the June 2016 issue of HC&G (Hamptons Cottages & Gardens) with the headline: Added Value.