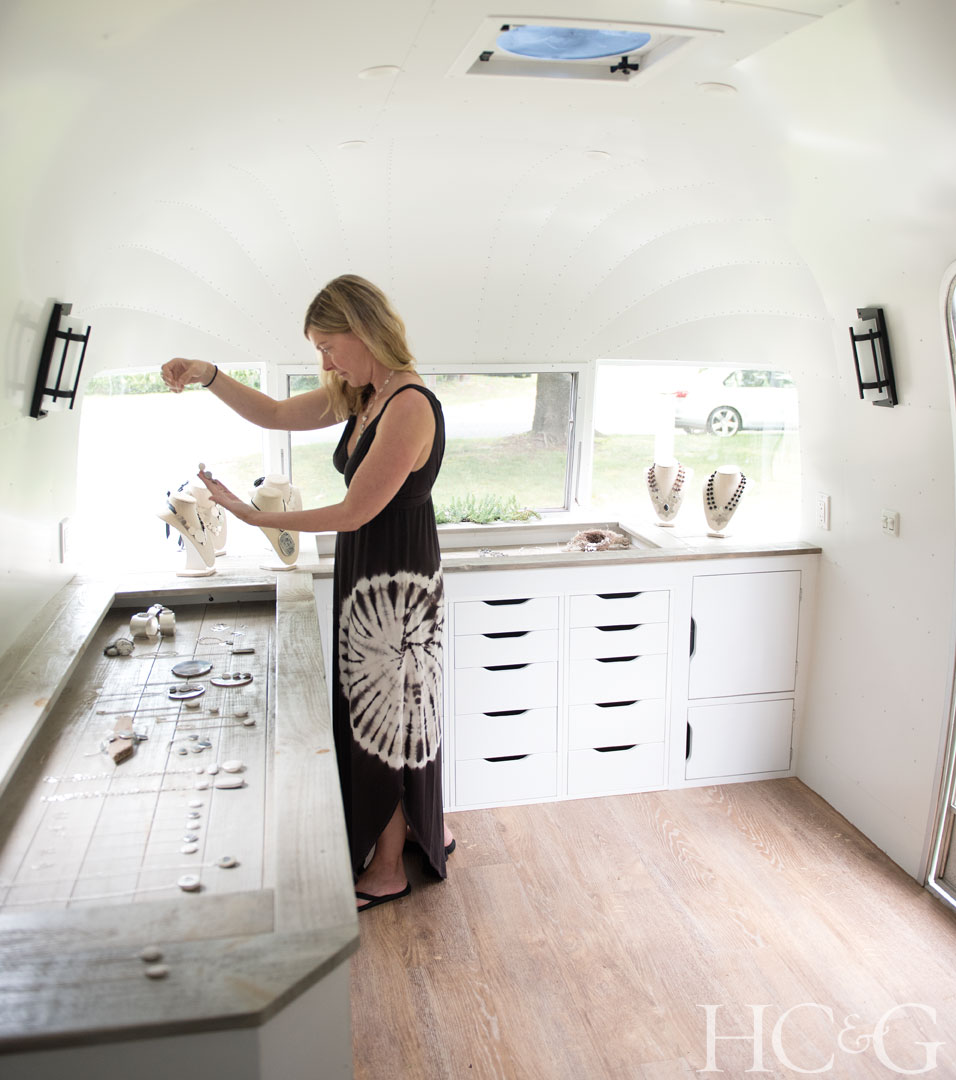 It’s not easy to miss the Airstream trailer parked in Mirinda Page’s front yard on West Neck Road on Shelter Island, or the studio open sandwich board that’s propped next to it. Visitors who venture inside are pleasantly surprised to find a stylish jewelry boutique showcasing Page’s necklaces, cuffs, and rings—many of which are crafted from local beach stones and brushed sterling silver. Page, who has been interested in making jewelry since childhood, learned metalworking at the arts high school she attended in Vermont. Her hobby continued into adulthood, and in 2005, she started taking silversmith classes at the Massachusetts College of Art and Design. With the encouragement of friends and family—especially her mother, who recently died from ALS—she started selling her pieces under the name Mimi Page Jewelry in 2007. 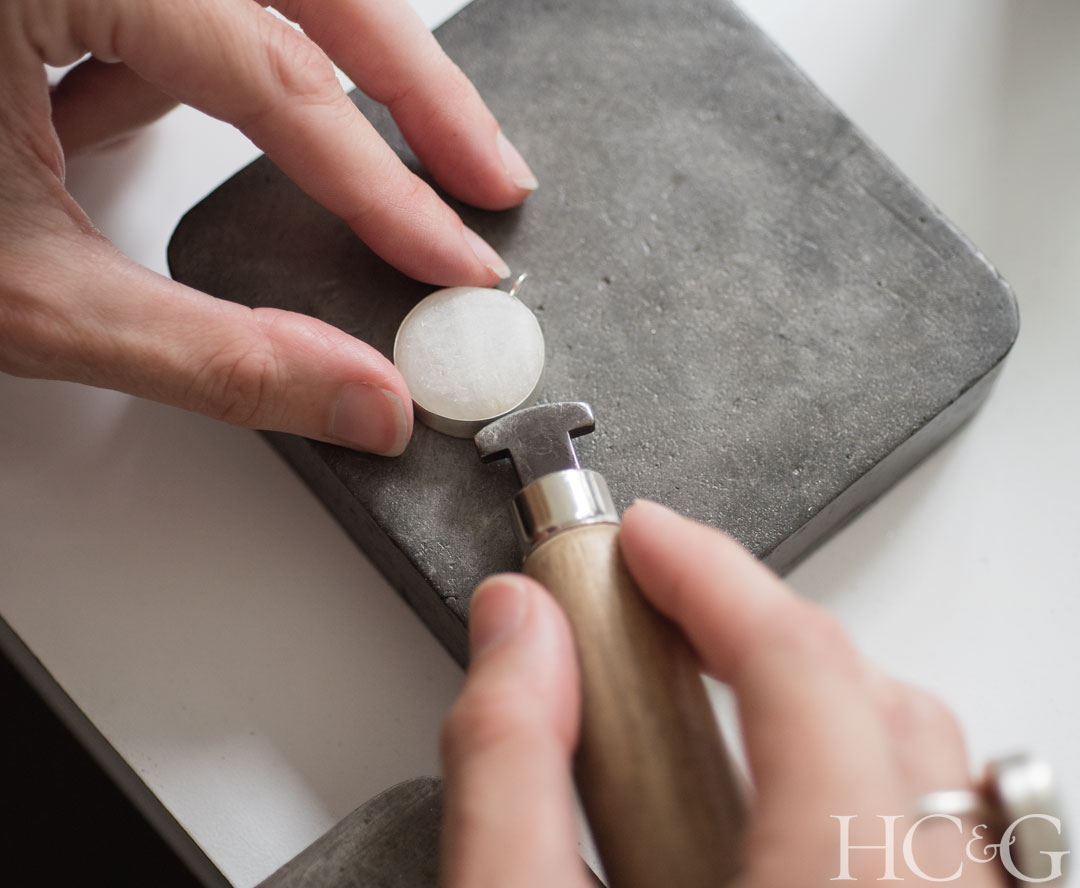 In 2012, Page moved to Shelter Island, where she began collecting stones during long walks on the beach. “I’d come back with 20 pounds of stones that I thought were cool, although I had no intention of using them for anything,” she says. “But one day I found the most perfect white stone and thought, Wow, this would really make a beautiful necklace.” As her business began to grow, though, Page grew out of working from her house. “A lightbulb went off in my head. I had always dreamed about owning a vintage Airstream trailer, and this was the perfect opportunity to make use of one.” 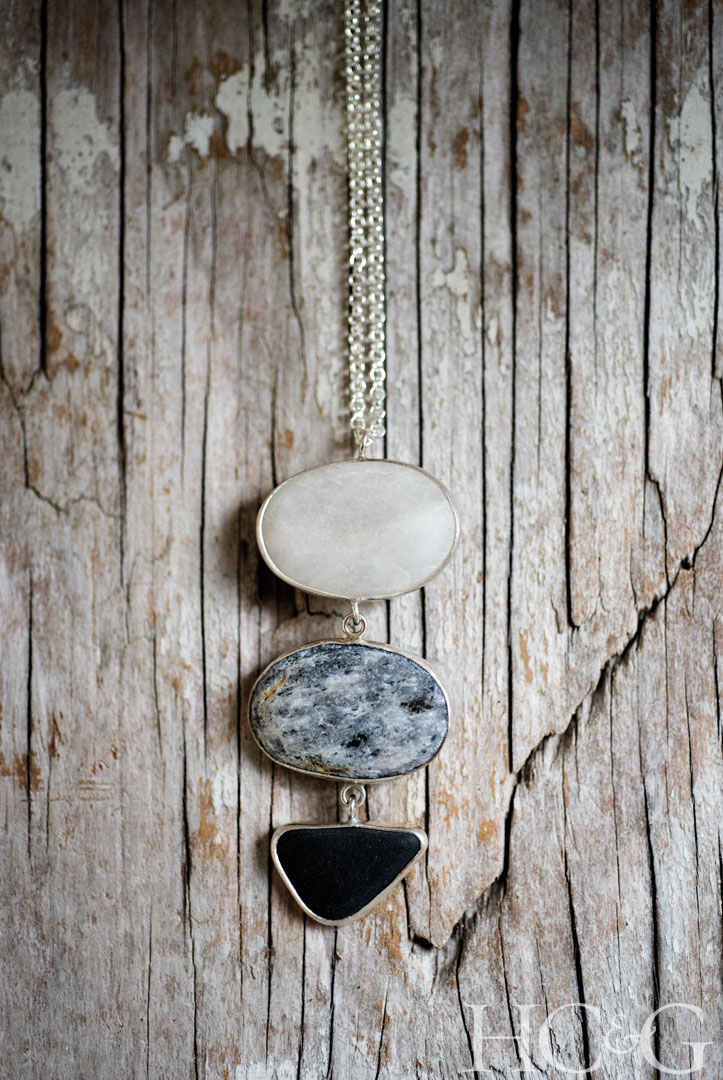 In 2014, Page purchased a 24-foot-long Argosy model on Craigslist and later asked ESK Productions, a small Airstream restoration company based in Brattleboro, Vermont, to refurbish it. (The 1974 Airstream’s interior had been gutted, and the exterior was oxidized from sun exposure.) Now the “beachy, yet sophisticated” shop, as Page describes it, features two distinct areas: a jewelry-making studio, complete with her worktable, and a boutique, which includes both display and storage space.

Page likens the process of starting a new piece, such as her triple beach stone pendant necklace, to doing a puzzle. “I sort through piles of stones to figure out which ones work well together,” she says. To hold each stone in place, the designer cuts bezel wire to size and solders both ends to create one continuous loop. Next, she attaches jump rings to the ends of each bezel in order to form a pendant, and then the piece is cleaned, rubbed with a brass brush to create the finish, and sanded to remove any residue. Finally, Page places the stones into the bezels, secures them with a bezel-setting tool, and threads the finished pendant onto a chain. “People will often ask if I’ve done anything to make the stones look polished and perfectly shaped,” says Page. “I brush the seaweed off, but other than that, the stones are exactly the way I found them on the beach.”

A version of this article appeared in the September/October 2016 issue of HC&G (Hamptons Cottages & Gardens) with the headline: Shining Bright.