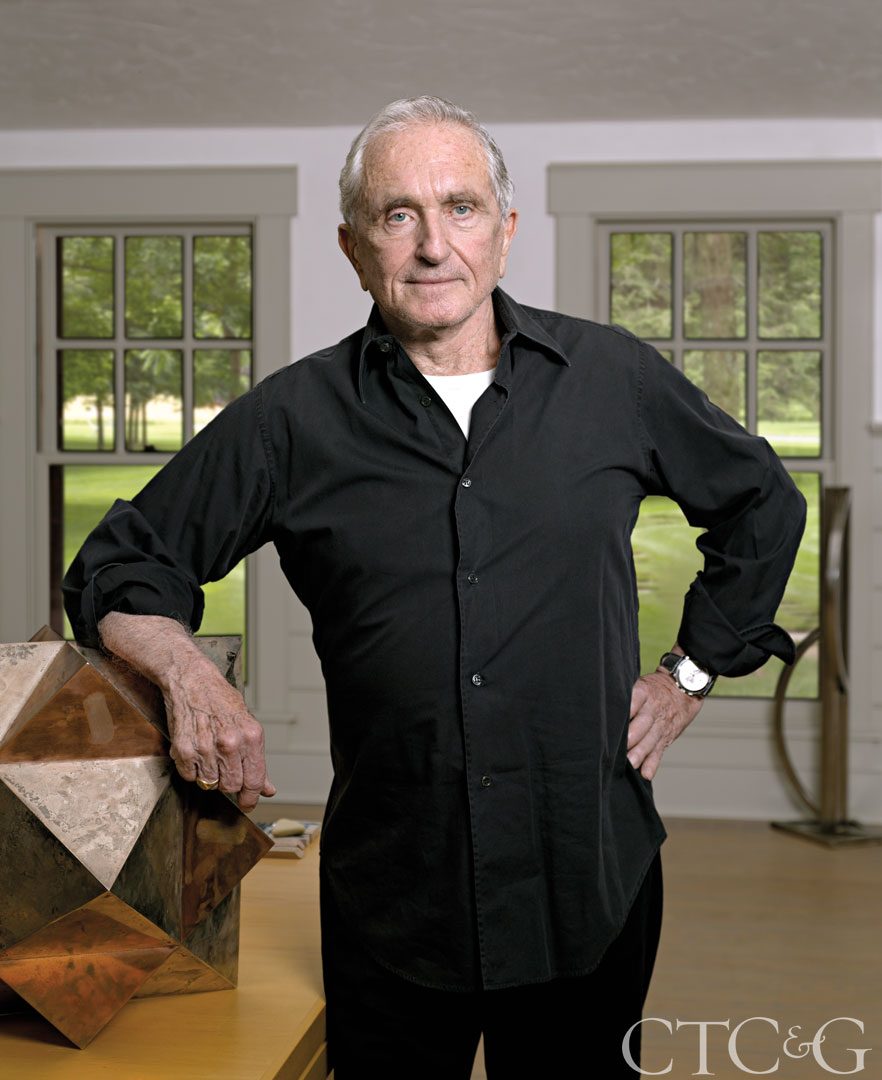 Now a recognized sculptor whose work was featured this fall in a show at Waterbury’s Mattatuck Museum, Arthur Carter is a man of multifaceted achievement. After studying French at Brown University and becoming a Coast Guard commanding officer, he went on to a successful career in finance before founding two newspapers and subsequently emerging as an accomplished sculptor. A recent book by Robert Morgan and Frank Rich, Arthur Carter: The Geometry of Passion (Abrams, 2016), spans his artistic output.

After your success on Wall Street, you founded the Litchfield County Times and the New York Observer. Did they help ignite your career in art? When I was publishing, I wanted the newspapers to be high quality publications. I wanted them to be strong and creative but still clear and pure. I became very interested in the design of the newspapers. I started sketching things each week for the newspaper, and I became the graphic designer, not just of the print page, but of the whole paper. 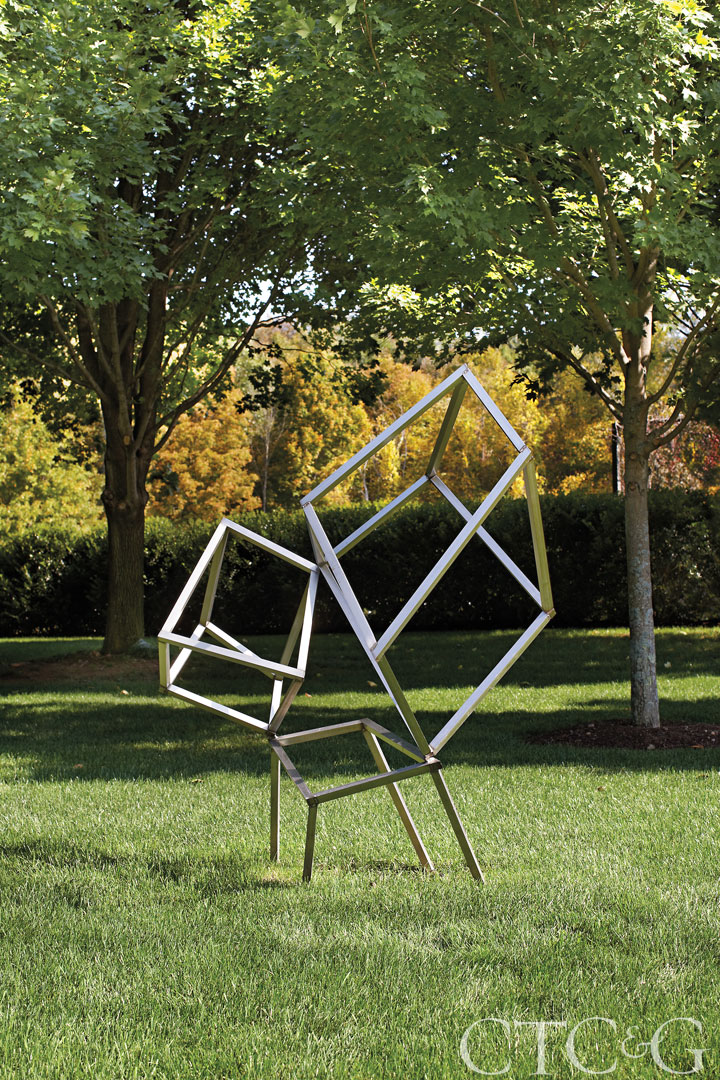 Isn’t that a big leap to creating large metal works of art? When I was in the Coast Guard, I learned welding, and I had two carpenters working for me. I took a look at the sketches I’d made and we built a model, and that started the whole process.

At Tuck Business School at Dartmouth, you discovered you have a great grasp of mathematics. How does that affect your art? There are a couple of very basic equations—particularly the Fibonacci series and the geometric equations that lead to a certain kind of graphic design—that I’ve used in most of the work I’ve built. Following the math—staying close to the ratio of height versus width and width versus depth—created a fundamental plan that I’d be able to carry out in the works of sculpture.

Many of the large sculptures seem to defy gravity. How do you engineer them? I draw a sketch and build a maquette. Then I build a piece from the maquette, and usually it’s a modest size not a big size unless someone wants to purchase it. Once you build a piece, you know the balance. I don’t think balance is an issue. 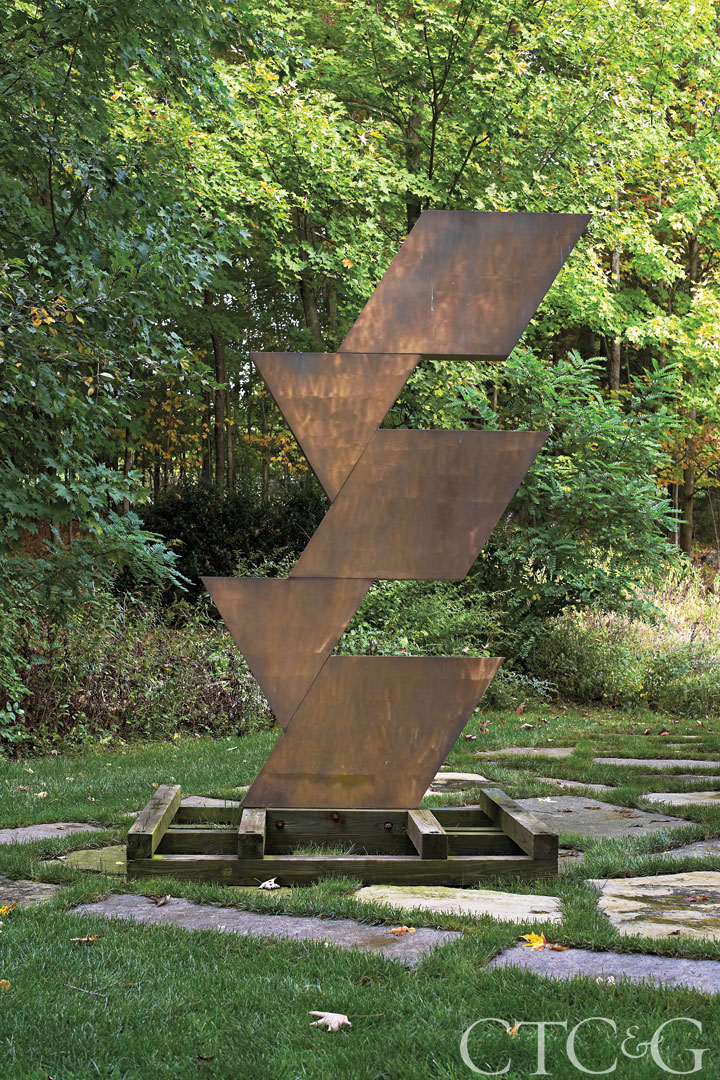 What is an issue? They should be very original, not copies of anything, and have a kind of purity and simplicity of aesthetics at the same time incorporating beautiful dimensions.

After starting in wood, you’ve advanced to working in steel, bronze, copper. Which do you prefer? I like them all, but in the last couple years, I’ve started using copper a lot. It has a different texture and color from the others.

You own and live on what was once the largest working farm in the state. What impact does Connecticut have on your work? If I wasn’t in Connecticut, I’m not sure I would have been able to follow this career. I built a machine shop that I couldn’t build anywhere else. I have a big facility to build the pieces in. For 22 years, I’ve had the two assistants I found. Also there were some great sculptors up there like Calder and others that may have influenced me.

A version of this article appeared in the November 2016 issue of CTC&G (Connecticut Cottages & Gardens) with the headline: Meet the Artist: Arthur Carter.