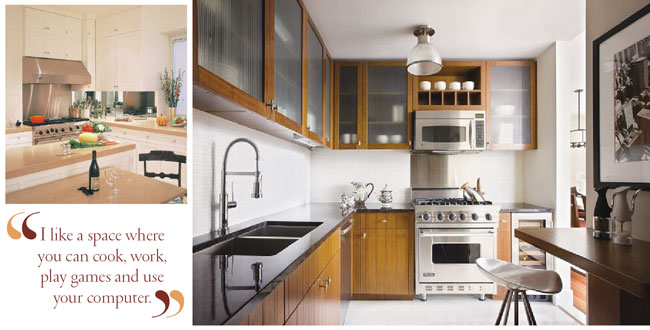 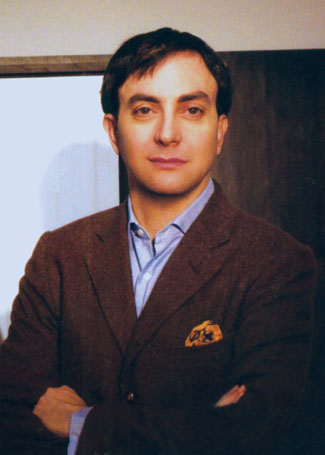 How did you end up becoming a designer? When I was a kid, I was always moving the furniture around. Accepted to study architecture at Harvard, I was intimidated, so I decided to ease into it by going to school for historic preservation. My great joy is building the environment, designing the furniture, fabrics, lighting—manipulating the whole space. I have a photographic memory for spaces; there isn’t one I’ve been in that I couldn’t re-create on paper. You’ve designed several kitchens, including your own in Connecticut. Why focus on the kitchen? It’s the heart of the home, traditionally the gathering place. I like a space where you can cook, work, play games and use your computer. I think it should be the largest room in the house. I’ve turned living rooms into kitchens because they were too small. Where do you start? First, I ask the clients if they cook. Often they say that they will start to cook if they have a kitchen that’s large enough. I don’t believe that. You’re not going to cook if you don’t already cook. And if they don’t, then we don’t need as much counter space and can have more “hanging out” space. The appliances should be sleek and built in so they disappear like cabinetry. You’ve designed kitchens for famous chefs. How is that different? For a chef’s kitchen, you start with a triangle: the refrigerator, stove and sink at the corners. And you need to keep in mind how much heat is generated by a professional range: If you locate a microwave or decorative item nearby, they’ll melt. Why do you include art and books in your kitchen designs? For me, art and books are like oxygen and water, plus you have to have something of interest to look at. In country houses, I substitute larger windows to frame the view. Whenever possible, I like to include a fireplace. I’ve discovered Ecosmart fireplaces—you put in a cartridge and they don’t have to be vented. Sometimes it’s nicer to watch the flame than the TV. Who would be your dream client? I’d like to design a kitchen for Prince Charles. He loves gardening, so I’d build it around a courtyard for a cutting garden. There’d be floor-to-ceiling bookcases for his library. And since he’s a patron of architecture, it would be symmetrical, Georgian in style, with sleek sculptural appliances. I’d like him to have a place where he could hang out with his family.

This article appears in the January 2012 issue of CTC&G (Connecticut Cottages & Gardens).