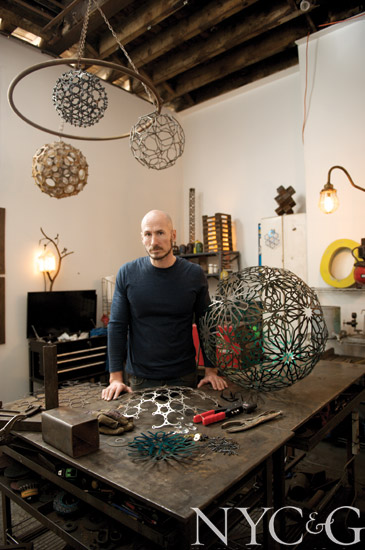 It’s hard to imagine that Kenneth Nilson finds inspiration in bold Moroccan prints and de Gournay wall coverings, given the complex geometric construction and sleek metal frames of his laser-cut light fixtures. “I build lighting, but wallpaper spurs my designs,” he declares. “A good pattern should unfold as you look at it.”

A North Dakota native, Nilson pursued graphic design at Minnesota State University and moved to New York City in the early 1990s. Several unsatisfying years in his chosen field, however, led him to quit his job and enroll in a welding class, where he learned to make furniture. Although a novice, Nilson quickly found he had a talent for it. “I’m drawn to metal and the ability to alter its finish,” he says. “You can find pieces at a junkyard and make them look new, or restore something that’s rusted.” Today he specializes in intricate laser-cut metalwork, much of it sold at Profiles in the New York Design Center, and creates custom commissions for decorators such as Jamie Drake. 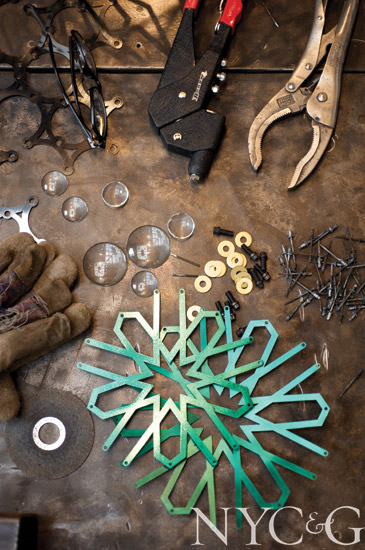 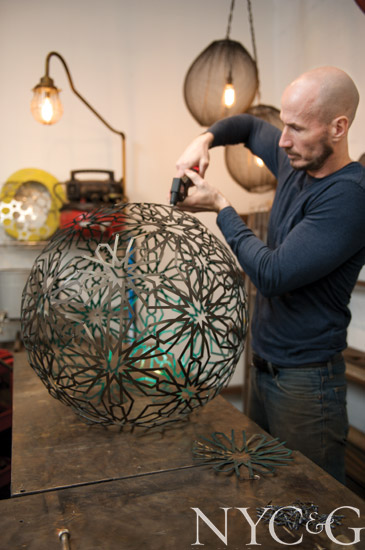 Nilson’s designs begin as a sketch in his notebook or on a computer, where he dreams up shapes that quickly evolve into specific patterns. “It happens by chance,” he says of the process. “You start with a single figure and watch it grow.” After settling on a pattern, he sends it to a laser cutter near his 225-square-foot studio in Sunset Park, who cuts the metal according to the specifications and sends it back to Nilson as a flat sheet. Under a large skylight illuminating rusty worktables, Nilson assembles each orb-shaped fixture by hand, bending the flat sheet over a steel sphere and securing it with a bolt. Once construction is finished, Nilson accents it with glass lenses or leaves the metal bare. “As with any interesting wallpaper, you see a pattern, but then you start to find secondary shapes,” he says. “What you see illuminated on the wall is not necessarily the pattern on each fixture.”

A version of this article appeared in the May/June 2015 issue of New York Cottages & Gardens with the headline: Laser Sharp.