Michael Bagley Transforms a Manhattan Penthouse into a Modern Abode 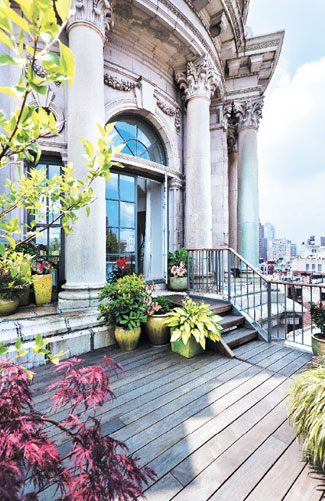 Completed in 1909 by architects Hoppin & Koen, the baroque beauty that once served as the headquarters for NewYork City’s police department wasn’t always such a head-turner.

During the fiscal crisis of the 1970s, the department  moved to new digs, and the building sat forlorn and neglected, a faded has-been on the sketchy fringe of as-yet-ungentrified SoHo. But its  fortunes changed after it was granted landmark status in 1978 and listed on the National Register of Historic Places in 1980. By 1988 it had been turned into a breathtaking condominium apartment  building. Celebrities like Cindy Crawford and Winona Ryder quickly snapped up apartments, and both Calvin Klein and Steffi Graf once inhabited its elaborately domed penthouse.

Today that penthouse belongs to Ahmass Fakahany, a former president of Merrill Lynch and the current CEO of the Altamarea restaurant group, and his wife, Alsun Keogh, who hired Manhattan-based designer Michael Bagley of  MB Designs to transform the space into a  modern abode suited for them and their two young children. Inspired by French 1930s and ’40s architecture and furnishings, Bagley created an elegant living scheme that still works for a busy 21st-century family. “The kids are five and seven years old, and I had to take that into consideration,” says Bagley. “I’m more of an interpreter than a designer. I like to figure out how clients live in order to design a comfortable space.”

Originally the penthouse measured 3,000 square feet, spread out over three floors. But with the discovery  of an extra room above the dome and the purchase of an adjoining apartment, the home grew to a massive 6,000 square feet—not including the 2,000 square feet from four terraces that encircle the dome. Dubbed the clock tower room, the newly annexed 40-foot-wide  circular space had not been used for more than a century and was previously accessible only to clock mechanics, who periodically showed up to make sure that the massive ticker was keeping accurate time. “The clock still works,” says Bagley, “so every 60 seconds  you can hear the minute hand making its move. The kids love it.” Still retaining its original brick walls, the space now acts as a casual family crash pad, complete with a grand piano for impromptu recitals. 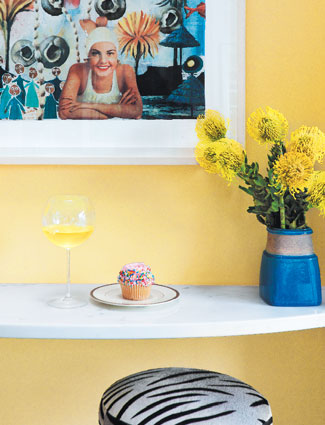 Lying directly below the clock tower room is the dome room, the apartment’s pièce de résistance. The large circular space boasts a dramatic ceiling height of 21.5 feet, 360-degree views of Manhattan, four enormous Palladian windows, and four sets of French doors. Within the ample circular living space, a custom handmade silk rug anchors the seating area, while floor-to-ceiling satin drapery panels bracket each window. “I wanted to celebrate the room’s shape, so the rug pattern features branches that seem to reach out across the circumference,” says Bagley. “Even the sofas were designed to follow the exact radius.” To join the dome room with the clock tower room above it, Bagley ripped out the original staircase, replacing it with a more refined spiral. “The staircase needed to have a sense of motion to it, since it’s so large. It has delicate curves but also a sense of whimsy, and literally floats around the room. There is a lot of history and thoughtfulness in this building’s architecture, and it was important to do it justice.”