After 75 years at the Cloisters Museum and Gardens in upper Manhattan, the gardens still include medieval planting schemes, using plants known in the Middle Ages, since John D. Rockefeller Jr., donated the Unicorn Tapestries to the museum in 1937. 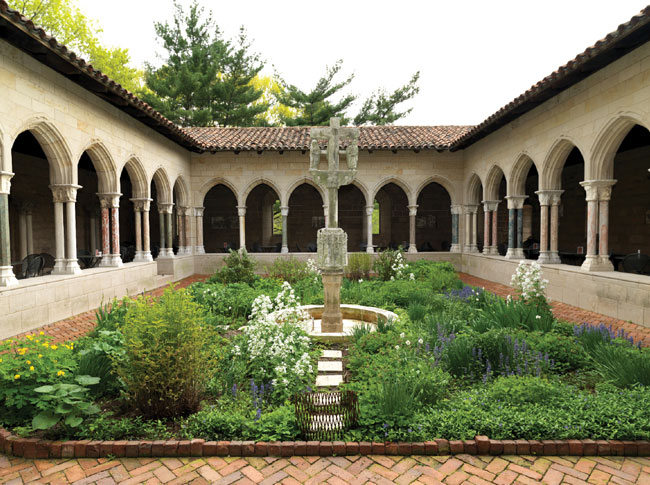 courtesy of the metropolitan museum of art

NYC&G: When did the gardens at the Cloisters start mimicking the plantings in the Unicorn Tapestries?
Deirdre Larkin, Managing Horticulturist, The Cloisters museum and gardens: The gardens have included medieval planting schemes, using plants known in the Middle Ages, since John D. Rockefeller, Jr., donated the Unicorn Tapestries to the museum in 1937. The gardens have always been an important part of the concept behind the Cloisters. The first curator, James Rorimer, was very interested in medieval garden history. It’s impressive how many plant species were grown here early on. The design has changed over the years, but it still contains only plants known in the medieval world.

How realistic are the plants in the tapestries?
DL: Extremely! They are much more detailed in the Unicorn Tapestries than in almost any other set of historic tapestries. Some plants are more stylized and some are more naturalistic, but overall there is a wonderful sense of detail. It’s astonishing how even the sheen on a leaf could be rendered in the threads of a tapestry.

Are there any plants in the tapestries that haven’t been identified?
DL: In the late 1930s, Carol H. Alexander and E. J. Woodward identified more than 80 of the 100 plants depicted. And in terms of medieval-period plants that can be cultivated in this region, we have a list of several hundred species, culled from documentary evidence from both literature and art. 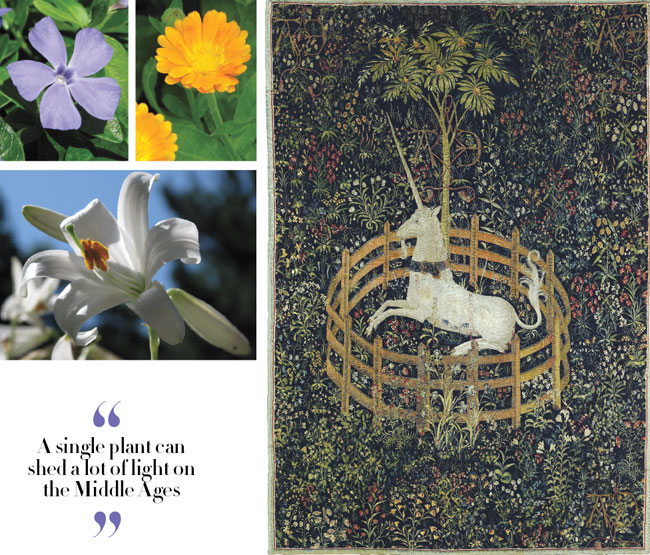 The unicorn in captivity, circa 1495–1505: courtesy of the metropolitan museum of art; FLOWERS: THE CLOISTERS gardens ARCHIVES

Is there a religious or romantic symbolism to the plants?
DL: By focusing on just a single plant, you can shed a lot of light on the Middle Ages. For some people, medieval art is not immediately accessible, but the gardens help make it more so. The plants are extraordinarily detailed even on these mille fleurs tapestry grounds—stylized, yes, but also very differentiated. And the position or the size of a plant can provide certain clues to its meaning, which can be interpreted in many different ways. For example, the rose is both sacred and profane. The way you interpret it might be influenced by the color, or whether or not it has thorns.

Are there any new plans for the garden?
DL: We are charged with “giving reality to the past,” as Mr. Rockefeller said, so we are always trying to improve our surroundings. The Trie garden was once based on the Unicorn Tapestries, but that garden is now being renovated and given more structure with foliage plants and small shrubs for year-round interest, with the mille fleurs aspect provided mostly by flowering bulbs. In the Bonnefont garden, we’re keeping the thematic arrangement but adding new plants from the 350 or so that are known from the Middle Ages and are hardy here. And we’re also replacing the willow wattle, which we get from Somerset, England, where they have been making wattle since the Neolithic Age.