When a former ex-pat family of four decided to put down roots in Greenwich, they called in designer Mimi Fong to bring them into the 21st century with style. 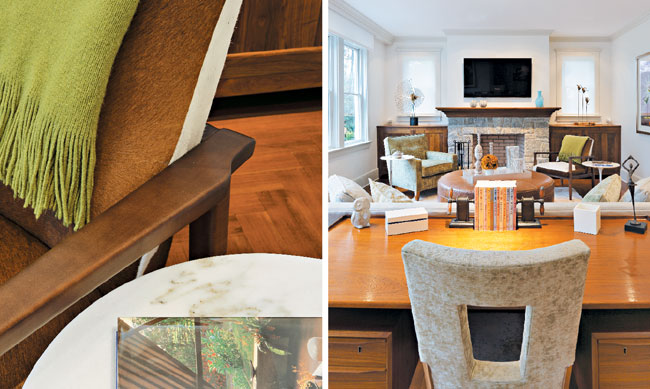 When a former ex-pat family of four decided to put down roots in Greenwich, they called interior designer Mimi Fong of Luminosus Designs. Their old furniture just didn’t fit the newer, larger home—in size or in style. “Our former starter furniture was very dark and a bit old-fashioned,” says the wife. “Mimi has brought us into the 21st century with style.”

Fong’s first challenge was reconciling two different design styles. “The wife has a more traditional style. She showed me a blue and white china vase and magazine clippings that were clean looking, but traditional,” says Fong. “The husband showed me an image of the bar at Tokyo’s Imperial Hotel: leather chairs, dark wood paneling, like a gentleman’s smoking lounge.” 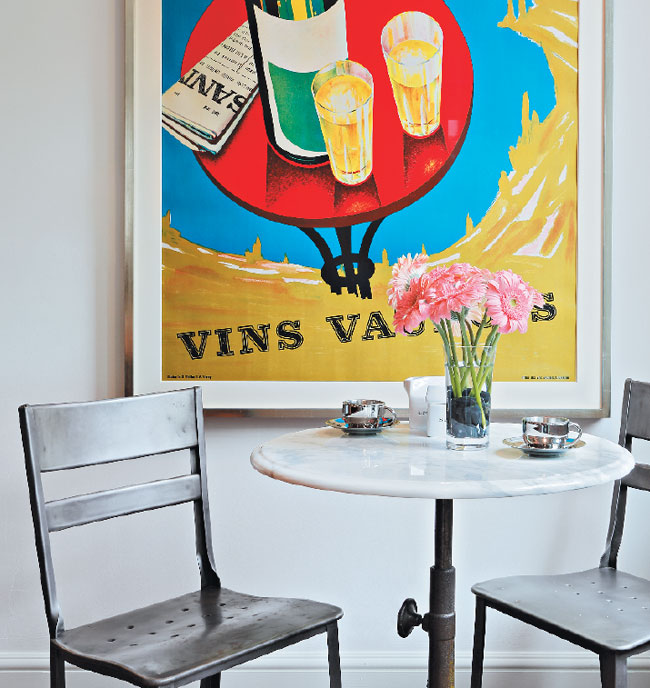 The beauty of the home’s design is that it’s kid-friendly, but doesn’t necessarily look kid-friendly. In the family room, for example, the homeowners wanted lots of light, a coordinating color and fabrics palette with neutral tones, and vintage pieces. Plenty of seating and space for a desk were also a priority, so Fong placed an antique desk behind a sofa that seats six. “The sofa is covered in ultrasuede from Kravet: the most durable fabric you can have. Marker and food stains come out with soap and water,” says Fong. “And the large ottoman is distressed leather. The more abuse it takes, the better it looks.” She also incorporated two chairs in front of the television, vintage posters and a cafe niche. “The posters add bright color to our family room and reflect our love of travel, wine and all things French,” says the wife.

A Provençal influence carries into the dining room, where furnishings are French-inspired: linen drapes, a pedestal table and vintage Drucker cafe chairs that the homeowner bought in New York. “They are the same chairs you find at Cafe Deux Magots or Brasserie Lipp in Paris,” says the wife. “We call it our ‘bistro’ dining room, rather than a ‘formal’ dining room and try to use it as a family room on weekends when we are all together.” With the addition of a long bench in durable Kravet ultrasuede, the table seats up to 10. The gray palette in the living room delivers the old lounge feel that the husband desired, but is soft enough for the wife to enjoy. The designer incorporated luscious fabrics for the pillows, dark chocolate leather for the sofa, and a custom table and rug. A window seat was created to open up the space. “It’s a nice, sweet, private space in an otherwise open floor plan,” says Fong. “It has a flip top and is cedar lined, so it provides storage for throws and pillows, making it easy to switch from a winter look to a summer look.” The window seat is flanked by bookcases with bottom storage and plenty of shelves. “We opted to display primarily cookbooks, since cooking is a hobby my husband and I share. And we have hundreds of cookbooks,” says the wife. 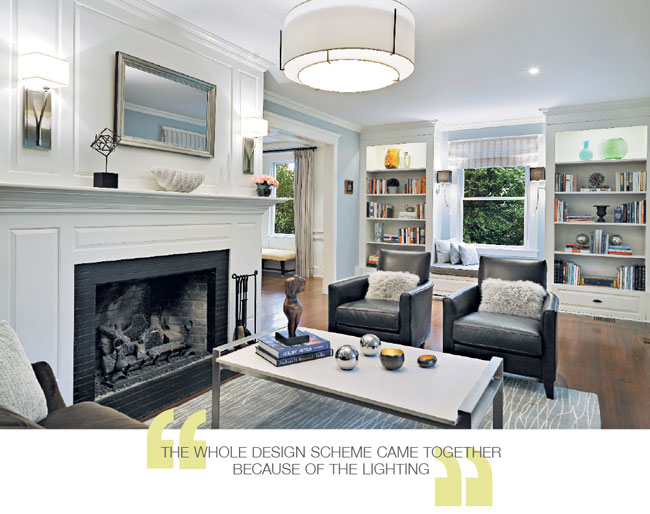 In this well-crafted 1920s home, the original lighting scheme—two sconces in the living room, four in the family room and 13 pot lights in the kitchen—left much to be desired. “We knew we were in good hands when Mimi took one look at our dining room and said we were ‘deficient by 900 lumens,’” says the wife. To brighten the kitchen, three pendants were added above the island, where additional seating was created with custom tractorseat stools by Gabor Ruzsan. “I restructured the recessed lighting scheme on the entire first floor and added table lamps to create layers of light,” says Fong. “The whole design scheme came together because of the lighting.”