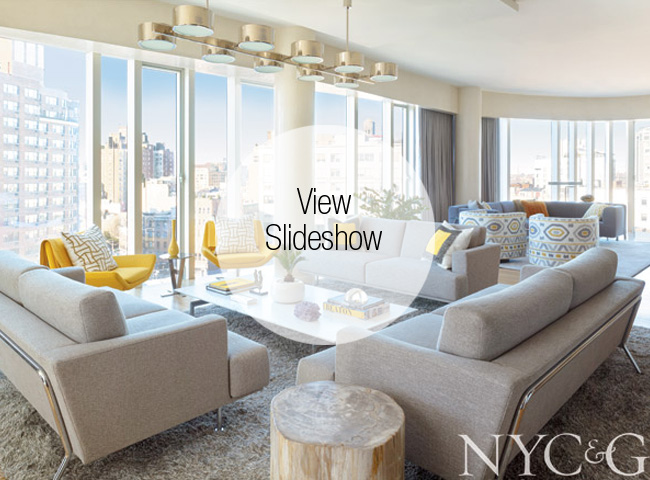 For designer Linherr Hollingsworth, no job is too small, big, daunting, or beneath her, even when it comes to a project started by another decorator and then abandoned halfway through. “We think of our firm as problem solvers,” Hollingsworth says of the West Village pied-à-terre she polished to completion for clients who have a primary residence in Connecticut. Hollingsworth already knew them well, bumping into them often at kids’ soccer games (they all live in the same town). “During our initial consultation, my clients told me they admired my work ethic, but admitted that one of the reasons they hired me was because they liked the way I dressed!” adds the designer, who worked in fashion in another life.

Bubbly and industrious, Hollingsworth runs her business out of an old factory in Norwalk, a sun-splashed space with white lacquered floors, clay walls, and washed-oak beams. A self-described hippie/rebel type, she has decorated her team’s headquarters with the tribal artifacts, vintage tapestries, beads, and Buddhas she has collected over the years in order to create an environment that’s calm and relaxed, yet inspiring. Raised in New York City and Weston, Connecticut, by a Swiss textile-executive father and an American mother, she grew up in a classic, rambling house filled with Oriental rugs and ginger jars. Being surrounded by beautiful things, she developed a passion for fabric and design, put to good use while she was working for such fashion powerhouses as Ann Taylor, Elie Tahari, and Adrienne Vittadini, before she decided to focus her energies on interiors.

For this project, the decorator and her clients shared a synergistic goal of enhancing the lighting, adding texture, and warming up the space, a glass-walled, ultramodern abode in the building known as One Jackson Square, which sits opposite the park of the same name, a contemporary gem among the neighborhood’s historic brownstones. Built by the architectural firm Kohn Pedersen Fox Associates, One Jackson Square features a distinctive façade of undulating floor-to-ceiling glass windows. Hollingsworth felt obliged to fashion the interiors in a way that would befit the modern structure, although the apartment’s quirky trapezoidal shape offered its fair share of challenges. The dining area, in particular, comes to a sharp point on one side, leaving little room for furnishings. The solution? More is more, courtesy of a substantial Armani Casa table surrounded by a suite of statement-making B&B Italia chairs, all on an area rug purposely set on an off angle. “Oddly,” says Hollingsworth, “this corner of the apartment is where you can find the most peace and quiet at the end of the day.”

A smattering of modern art is right in tune with the setting. Hollingsworth’s clients favor the work of artists such as Donald Sultan, Donald Baechler, and Brazilian-based Pierre-Marie Brisson, whose Matisse-like Les Acanthes hangs in the foyer opposite a wall painted marigold yellow. The decorator introduced more complex pieces, such as Jeff Zimmerman’s Splash, a custom sculptural wall work made from “tears” of frosted mercury glass, and a stainless-steel 1960s console with a stacked, off-kilter base, which amplifies the Charlie Miesmer canvas that hangs above. The massive polished silver light fixture in the living area, originally designed for an old hotel in Italy, comprises two rows of circles, drawing the eye inward and upward.

For such a quirky space and multiple disparate parts, the modern mélange evolved into an elegant aerie that fulfilled Hollingsworth’s objective of creating a chic city getaway. “We had a wonderful canvas to work with,” says the designer, “and now it has become a comfortable home.”

A version of this article appeared in the May/June 2015 issue of New York Cottages & Gardens with the headline: Urban Oasis.