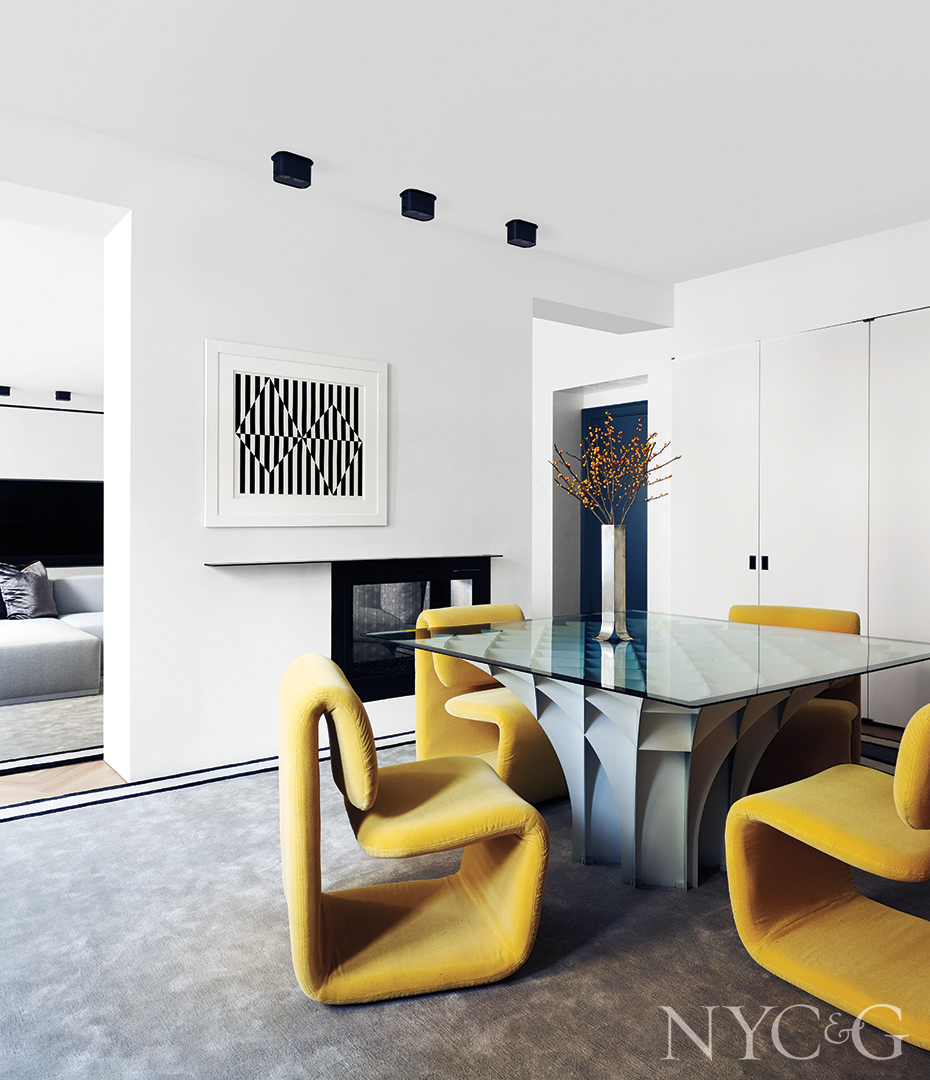 Manhattan-based designer Carol Egan refers to herself as a chameleon. While she has a decidedly contemporary aesthetic, her work is always “a response to the specific architecture and client involved,” she says.”I don’t rinse and repeat.”

Originally from Dublin, Egan worked for architectural firms in Europe before moving to the States two decades ago to pursue a degree in interior architecture at Parsons. “In Europe, I studied psychology, sociology, and art history, but I was always most interested in the latter. Now my sensibility is driven by my architectural background. I like to educate clients, get to know them and what they respond to, and then give them the best version of what I think they want.” 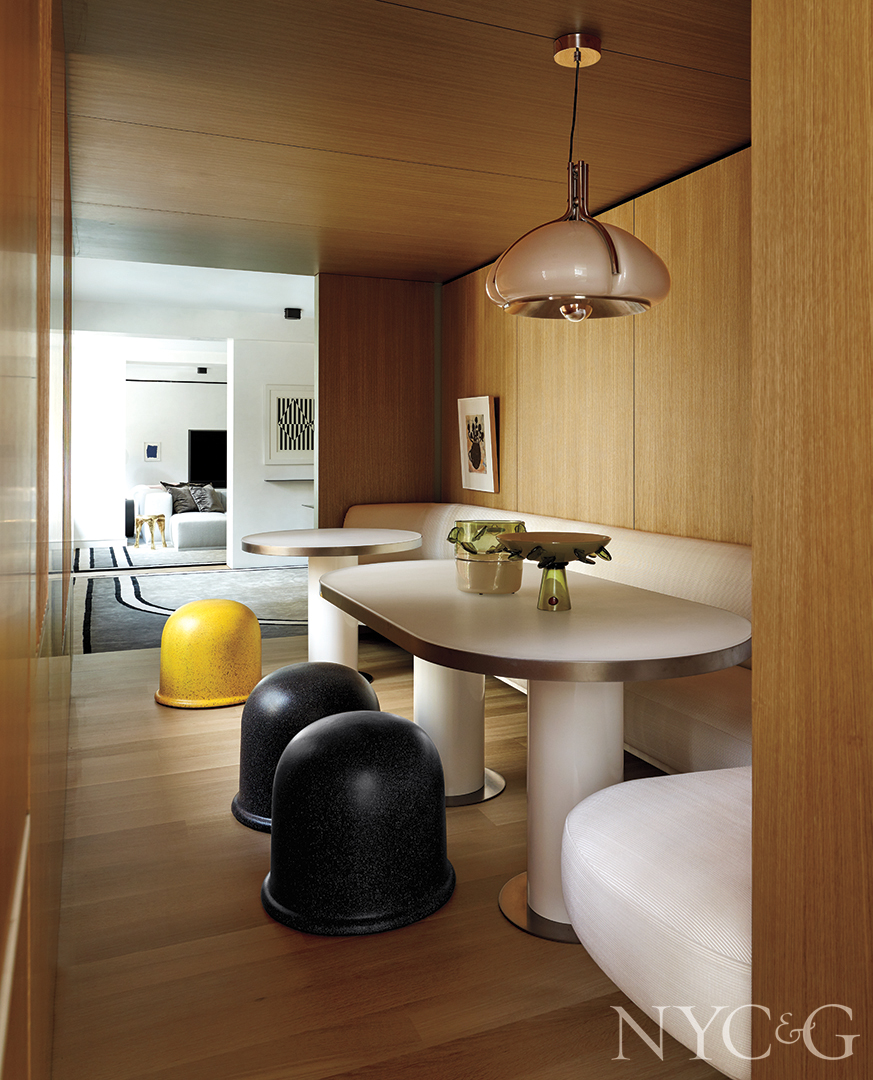 Always up for an architectural challenge, Egan recently had the good fortune of sinking her teeth into an Upper East Side project with one of her longtime collaborators, architect Carl Muehleisen. The clients—a music executive and his wife, who have two teenage daughters—had read about another residence the pair designed, and asked the band to get back together, so to speak. The couple had recently acquired the neighboring unit in their Park Avenue prewar, increasing the three-bedroom’s square footage to 2,800.

Egan and Muehleisen worked hand in hand from the get-go, beginning with gutting both units. “Because we were going from a classic prewar layout to an open plan, the first thing we did was demolish the entire space in order to address any potential problems early on,” Egan notes. Now the apartment is separated into public and private spaces, further delineated by an oak “box” that contains the bedrooms and laundry.

Inspired by the sculptural shapes produced by minimalist artist Donald Judd, Muehleisen inserted a similar “box” into the front of the pad to contain the breakfast area, pantry, powder room, and mechanics. Meanwhile, a double-sided fireplace divides the living and dining rooms and marks the spot where the original wall separating the two units once stood. 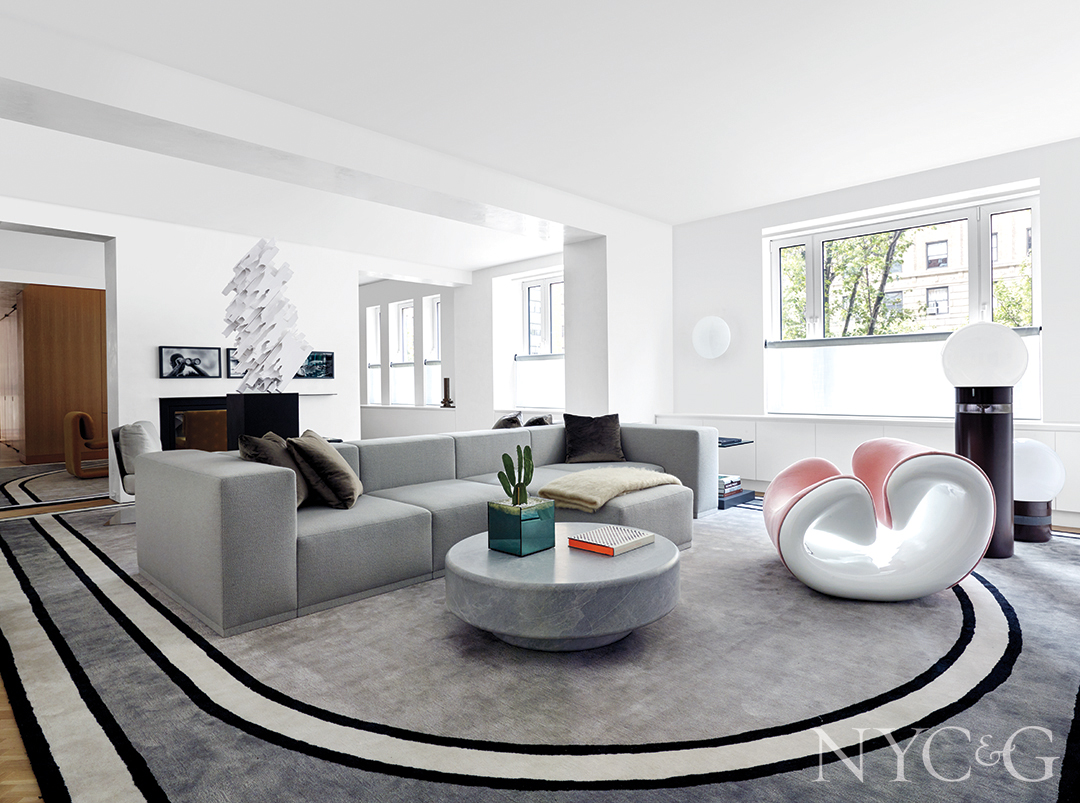 “You get a true sense of the volume of the home when you walk in,” explains Egan. “Enfilades help maintain a classic Park Avenue feel, but with a more contemporary framing. And the box concept is a good vehicle for bringing storage into open-plan living: There are walls of concealed cabinetry in the kitchen, living room, back entry, and master dressing area.”

To complement the sleek architecture, Egan chose strong, graphic furnishings and artwork. “Sculptural, playful forms offset the series of boxes,” says the designer, who brought in several Italian and French pieces from the 1960s and ’70s, in a contemporaneous nod to Judd. A curvy circa-1970 Jean- Pierre Laporte chair and a Gae Aulenti floor lamp from 1968, for instance, add whimsy to the living room, while an aluminum-and-glass Pierre Paulin table (”A sculpture in and of itself,” Egan remarks) and yellow mohair Etienne Henri Martin chairs from the 1960s make a statement in the dining room.

But Egan’s favorite spot is the oak-encased breakfast area, which features slats that allow for diffused natural light and a custom oversize banquette, café-style tables, and vintage Italian lighting and stools. “There’s a very sensual aura throughout the apartment,” Egan observes. “You sit there with a cup of coffee, and life is good.”