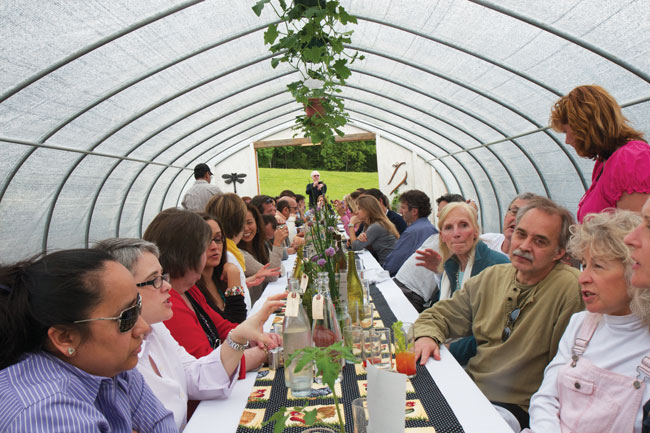 You’ve never met your fellow diners, you have no clue what’s on the menu, and even your dinner location is a mystery. This isn’t your average meal … this is Souterrain, an underground dinner hosted by chef Bill Taibe of Westport’s leFarm—part of a trend of pop-up restaurants, family meals and farm  dinners forming the backbone of a thriving alternative local dining scene.

Held in a new location every other month, Souterrain dinners celebrate seasonality and local foods. Venues are announced sometimes only 24 hours in advance. A brunch-themed menu at Easton’s Sport Hill Farm over the summer featured ingredients sourced just steps away, such as farmer Patti Popp’s lettuce. Taibe’s decadent take on brunch kicked off with fried oysters, ramps and poached eggs, a smoked-trout dip with roe, a salad filled with Popp’s lettuce and local cheese and a decidedly upscale take on that most basic of breakfast staples—sausage, egg and cheese—served on a bacon-and-rosemary English muffin.

Underground meals such as Souterrain let chefs break free from the constraints of four walls, printed menus and expectations. “Souterrain was forged out of our belief that the typical restaurant setting is not essential in creating a memorable meal,” says Taibe. “At the end of the day, it’s all about the food you’re eating and the people you’re eating it with.”

Both chefs and diners are creatively challenged and inspired by the  mystery of undisclosed locations and the spirit of communal dining.

Although the Sport Hill Souterrain sold out in mere minutes to 60 lucky guests who responded to the restaurant’s mass e-mail, the rest of us can experience an equally intimate but less exclusive meal at a fleeting eatery or farm dinner. Maria The Restaurant is a pop-up restaurant in Stamford that trades the element of surprise for star power, serving up fare prepared by Top Chef’s Dave Martin in a temporary space.

Farm dinners provide a more accessible and adventurous option for those who don’t mind packing a pair of Wellies. Described as a “roving culinary adventure,” Outstanding in the Field hosts dinners at farms and ranches across the country (through early December). Last month it touched down in Washington (CT) with chef Michel Nischan of Dressing Room and Community Table chef Joel Viehland.

Dinners at the Farm offers a uniquely Connecticut communal farm-inspired meal at Barberry Hill Farm in Madison and White Gate Farm in East Lyme; it celebrated its fifth anniversary this year. In Wilton, Ambler Farm and Millstone Farm launched their own farm dinners this year with chef Tim LaBant of The Schoolhouse. No stranger to local farms and ingredients, LaBant, like many other Connecticut chefs behind these restaurants without walls, has forged strong bonds with the farming community.

Underground meals, pop-up restaurants and fresh-from-the-farm  dinners are part of a sea change in dining, a trend that underscores chefs as curators of the culinary moment. This new kind of dining experience reflects the interests of an active and intelligent dining community: Passionate and discerning gourmands seeking out new ways to connect with their favorite chefs.