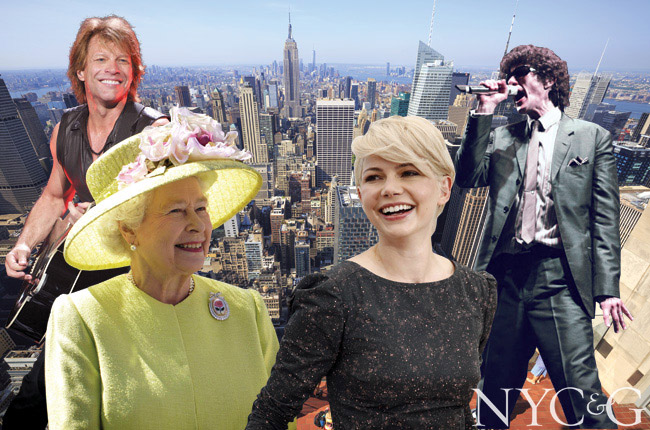 Lots can happen in the city that never sleeps, especially in the ever-revolving world of real estate. In SoHo, Jon Bon Jovi’s 7,400-square-foot duplex penthouse at 158 Mercer Street (Arianna Huffington is his neighbor) had been lingering on the market for a few years at $42 million. Listing on a prayer? At least it was more than halfway there: It sold for $34 million in late March. (Bon Jovi had bought the triple-terraced pad with 11-foot ceilings and two fireplaces for $24 million in 2007.) Doormen on alert: They’ll all hail the Queen at Elizabeth II’s new 3,000-square-foot three-bedroom in the Sir Norman Foster–designed glassy tower at 50 United Nations Plaza, where the private gated entrance and motor court make for a royal welcome. In Prospect Park, Michelle Williams found herself a fixer-upper: a 114-year-old Colonial Revival mansion in the $2 million range that needs a gut renovation. Williams should have no problem restoring its gracious elements—Doric and Ionic columns, eight fireplaces, and spiral staircase—after selling her Boerum Hill townhouse for $8.8 million in a bidding war late last year, $5.2 million more than she and the late Heath Ledger paid for it in 2005. The Cobble Hill home of the Beastie Boys’ Mike D—a 3,200-square-foot Italianate townhouse at 148 Baltic Street listed for $5.65 million—recently went into contract. But will the lucky buyer keep the wallpaper? Mike D worked with the locally based indie wall-covering company Flavor Paper to design his home’s Brooklyn-themed toile, which depicts the Notorious B.I.G., Hasidic Jews, the Brooklyn Bridge, and Nathan’s Famous. Even more provocative was the home’s recent role as a backdrop for an amateur adult photography session that was posted on Tumblr. Let’s just say agents Amy Katcher, Leslie Marshall, and James Cornell of Corcoran Group Real Estate went with different shots for the listing photographs. Back in Manhattan, John Legend and Chrissy Teigen are offering their 2,000-square-foot loft at 374 Broome Street for $4.495 million, a steep bump up from their $2.55 million purchase price three years ago. Just this spring, the pad and its owners were given the glossy cover treatment in Architectural Digest, following a curious trend set by other celebrity home sellers/flippers such as Ellen DeGeneres (published November 2011, sold May 2012), Jennifer Aniston (published March 2010, sold June 2011), and Patrick Dempsey (published March 2014, sold June 2015).

A version of this article appeared in the September 2015 issue of New York Cottages & Gardens with the headline: Deeds & Don'ts: Movers and Shakers.