Inspired by her surroundings, Trudy Dujardin creates a sense of place at her seaside cottage 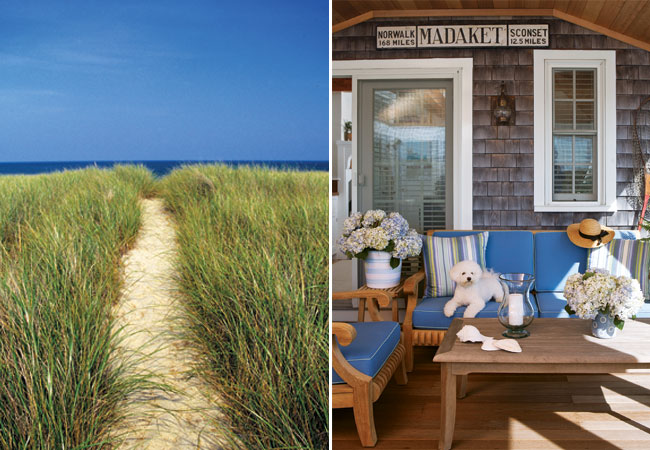 Things didn’t go according to plan that gray January day two years ago when Trudy Dujardin and her husband Frank Fasanella flew to Nantucket hoping to nail down a summer rental. They planned to look in town and in Monomoy, where Trudy had previously owned homes. Instead, the broker took them to see a tiny Cape in the village of Madaket on the westernmost end of the island that was for sale, not rent.

The broker begged her to reconsider. “He said, ‘I know you, Trudy. You’re going to love this house.’” She did. “I walked in and my jaw dropped,” she said. “The house has an innate warmth. It feels like it puts its arms around you.” She made an offer that day. Five months later the couple moved in, just about the time that the island’s fabled blue hydrangeas were starting to bloom.

The 2,400-square-foot cottage is situated a block from the water: On one side is the fishing harbor, on the other, the ocean. At night, the couple can hear the waves break. Although it was built in the late 1960s, the prior owners had “treated it like a baby,” she said. It was dry, clean and mold-free. One of the first things Dujardin did was install central air conditioning and a heat recovery ventilation system that exchanges inside and outside air every twenty minutes and lowers the level of VOCs. This is especially important to the Westport-based designer who has a condition called multiple chemical sensitivity.

Over the years, she has experienced the benefits of living in a toxin- and chemical-free environment, and today she brings her “gently green” philosophy into all her design projects. “I can go light green or deep green,” she laughed. “For this house I went deep green.” 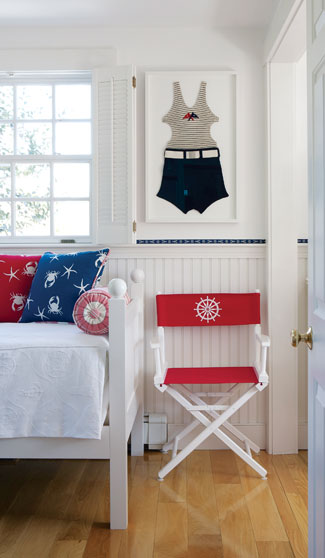 To freshen up the interior, she drew inspiration from her surroundings. She chose a blue and white palette, with hints of red (Nantucket red, that is). She kept the clutter to a minimum; upholstered pieces are tailored and sophisticated; the lighting is contemporary, much of it with a nautical feel. The effect is light and breezy, like a sparkling ocean on a summer day.

Instead of tearing out the knotty pine walls and floors, she lightened them with white paint or water-based stains. Rather than dumping the
“perfectly good cherry cabinets” in the kitchen, she painted them white, too. The orange granite countertops, however, were a different story. Those went to the “Madaket Mall” (the local landfill), where someone scooped them up almost immediately. In their place: honed Vermont Danby Imperial marble, with hints of taupe and gray. “Sourcing things locally is one way to keep your carbon footprint down,” she said.

The only change to the existing footprint was the addition of a porch with a natural cedar ceiling. She added solid wood built-ins and had furniture custom-made to her green specifications. The living room, with its marine-blue sofas and white linen pillows has a crisp, masculine feel. “I wanted someplace my husband and his friends would be comfortable having a beer,” she said. 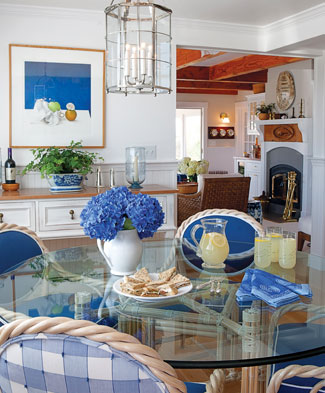 The guest room, done in red, white and blue is more whimsical: Metal sand pails line a shelf above the bed, a framed bathing costume hangs on one wall, red and blue pillows sport a crab and lobster motif. “People walk into this room, and they burst out laughing,” she said. Upstairs the master bedroom is a serene retreat of pastel blues, seafoam greens and soft whites.

Throughout are the vintage pieces and antiques she has collected over the years, such as the rare 18th-century “British Woolie,” the scrimshaw tortoise shell above the mantel, and a museum-quality Fred Ely lightship basket with carved walnut whales on gold posts.
“We’re on an island, 30 miles at sea,” she said. “I’ve tried to introduce elements that reflect the sense of place. I didn’t want it to look like just another beach house.”