You, too, can live like a celebrity—or even in a celebrity’s apartment—as long as the desire and your pockets are deep enough. And if you act quickly enough. 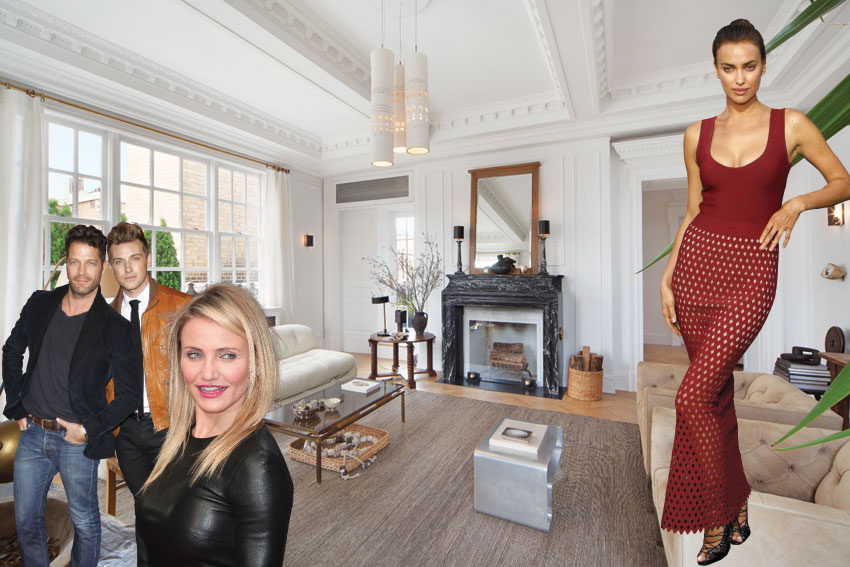 Stylish sophisticates across town are swooning over designer Nate Berkus and Jeremiah Brent’s chic Greenwich Village penthouse, which they share with their toddler daughter, Poppy. The prewar co-op at 39 Fifth Avenue, listed for $10.5 million in November with Emily Beare of Core, boasts three bedrooms, three wood-burning fireplaces, and an eight-burner Viking range. But if there’s something about Cameron Diaz that gets you all hot and bothered, you’re a little too late to the party: An apartment owned by the actress (and designed to the nines by Kelly Wearstler) was scooped up in December by a buyer who couldn’t resist its brass-trimmed emerald-green kitchen and rose-gold glass-tiled dining room. Listed for $4.25 million with Rebecca Edwardson of Warburg Realty, the 1,400-square-foot two-bedroom in the Art Deco Bing & Bing condo at 59 West 12th Street went into contract in less than two months, leaving Diaz with some extra change—she purchased the apartment for $2.95 million in 2008—to lavish on her current home in Chelsea’s Walker Tower, another Art Deco gem. And what’s wrong with trading up, anyway? After parting from soccer superstar Cristiano Ronaldo and taking up with Bradley Cooper, model Irina Shayk is no longer on the market, but her 2,500-square-foot Perry Street apartment is. The svelte Sports Illustrated swimsuit cover girl is asking $3.995 million, a substantial bump up from the $1.962 million she paid for the place in 2010. The Douglas Elliman–listed two-bedroom comes with a private screening room and two refrigerators, which we suspect Shayk hasn’t raided very often. “Good girls go to heaven, bad girls go everywhere,” said legendary Cosmopolitan editor Helen Gurley Brown, who simply went straight to the top—spending more than three decades at the top of the Cosmo masthead and even longer at the top of the legendary Beresford at 211 Central Park West, where she owned the southeast tower’s penthouse. Gurley Brown, who died in 2012, and her late husband, David, purchased the apartment during the 1970s from director Mike Nichols (other famous tenants have included Jerry Seinfeld, Glenn Close, and Diana Ross). Listed last November for $20 million with Gabriele Devlin of Sotheby’s, the penthouse—a riot of pink, red, leopard print, and gold, with a 17-foot-tall great room that offers expansive views in three directions—went into contract in less than two months.

A version of this article appeared in the March 2016 issue of NYC&G (New York Cottages & Gardens) with the headline: Star Attractions.