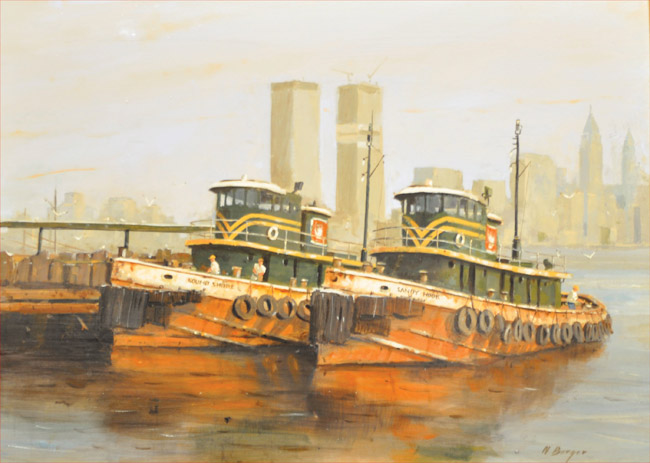 Scenes of the great outdoors stood out at the Avenue Antiques
Show this spring; it was truly a breath of fresh air! A number of dealers from our area exhibited an array of impressive and important paintings whose themes ranged from equine to maritime. Among my favorites was an outstanding and well-edited collection of classic 18th- to 19th-century English and European paintings shown by David Brooker Fine Art (362 Pequot Ave., Southport, 203-232-2807, davidbrooker.com). The collection had an appealing rusticity throughout; its traditional subject matter was simple to understand, yet reflected superior quality and condition. The paintings were described by Brooker as “what someone would have found in English country homes of a hundred years ago, an English country house aesthetic.”

Although many of Brooker’s paintings are sold to clients in New England, some of his pieces are repatriated back to the U.K. as well. Says Brooker: “We sell a lot of paintings to people who want a snapshot of a place, a holiday they want to remember, a scene that they recall from when they were younger … for instance a scene from Venice, London or Paris.” 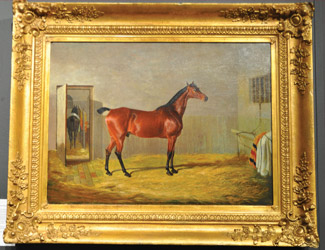 Dominating the center of David Brooker’s booth was an arresting image of a horse painted by John Frederick Herring. Herring is “the father of all equestrian art in England and arguably among the greatest horse painters of all time,” according to Brooker. “He’s a million-dollar artist and by that I mean that a larger painting by him of racehorses will make a million dollars at auction in a heartbeat. This painting possesses the same quality, though [it dates from] earlier in his career.”

A painting of a dog caught my eye. A terrier with large ears and a piercing gaze sits atop a wooden crate in this 1920s portrait by Frances Mabel Hollams. The dog’s gaze and posture signal his readiness to leap at any moment, while block letters above him spell out “James Pigg.” Hollams was a rarity in early 20th-century England because she was not only a gifted artist, but one of a very few “lady painters,” as Brooker calls them. “She captured a simplicity that is hard to put into words,” he adds. Her work is considered very modern for its time because her subjects often float in a wash of color, rather than in a typical Victorian setting, making them suitable for a variety of environments today.

Two notable architectural renderings by American artist Keith McDaniel (1948–1986) were featured by the FraMonT Gallery (Greenwich, by appointment only, 203-661-9675, artnet.com/framont.html). “As JP Morgan used to say, ‘Quality is the best bargain,’ and I am interested in quality,” says FraMonT owner Bruno Francois. Of McDaniel’s paintings, Francois says: “I think this is a good representation of a certain American school of art that is interested in architecture. Architecture in America is truly artistic, and [McDaniel’s] work captures a link between Europe and America. The palette of color is very European and the repetition of squares is very simple and beautiful.”

Also from Greenwich, Cavalier Galleries, Inc. (405 Greenwich Ave., Greenwich, 203-869-3664, cavaliergalleries.com) had a wonderful display of Nicholas Berger oil paintings. Berger has an affinity for humble tugboats in the harbor, so the exhibit was dominated by images of them both hard at work and at rest. “I wanted to catch a piece of history here,” says Berger of his work. He continues: “I just thought the New York waterfront would be a cool thing to paint, and I’m really just starting to explore it.

“These places are gone. The images represent the 1950s and ’60s—all the way up to 1971, when the twin towers were just nearing completion.” In his painting titled Twins, Berger has poignantly juxtaposed a matched pair of green tugboats with the twin towers in the background.

Works of art such as these remind us of the many scenes that surrounded us in the past and those that surround us still; original paintings allow us to appreciate the outdoors all year round.

This article appears in the May 2011 issue of CTC&G (Connecticut Cottages & Gardens).