In his comfortable, inviting East Hampton home,  Miami-based decorator Michael Katz proves how a minimal palette of black, gray, cream and brown can be downright decadent 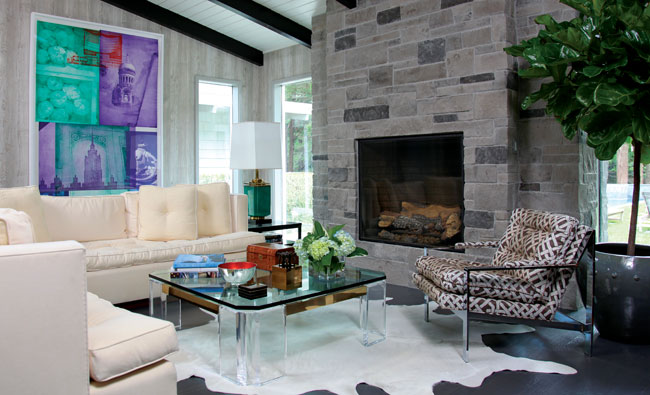 Three years ago, when Michael Katz first set eyes on the cedar-shingled four-bedroom house in East Hampton’s Northwest Woods, he could hardly contain his enthusiasm. “My broker looked at me like I was nuts,” Katz recalls. “He didn’t see what I saw.” What the real estate agent—and most people lacking Katz’s vision—saw was a mid-1960s ranch with small windows, outdated bathrooms, dark interior brickwork and a quirky landscape dominated by a manmade “river,” all in need of a serious upgrade. It was very different from the traditional-style Hamptons houses Katz had been building and selling on spec since first coming to the East End in 1992.

What Katz beheld: a one-of-a-kind “bohemian cottage” by mid-20th-century architect Daniel Chait, with cool period details like a carport with a gravel floor and a 60-foot-long skylight running like a spine above the main living space. With his practiced eye, Katz, a self-taught decorator, wasn’t swayed by anyone else’s viewpoint. “The house gave me that Northern California, easy-living feeling,” recalls Katz, who divides his time between Miami and East Hampton. “I knew exactly what it could be—glamorous, without being pretentious.” 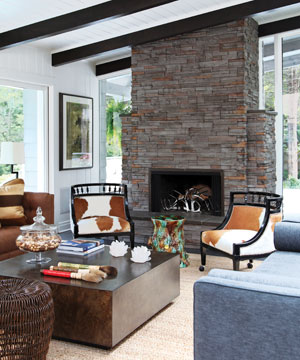 After an intense year and a half of renovation and redecorating, Katz’s vision is now fully realized, and the once dowdy house has become a cohesive, light-filled home. Each room is immaculately decorated in sophisticated neutrals and admirable scores from Florida antiques shops and estate sales. The 2.25-acre property has been regraded and the landscape reworked, with a sleek new pool surrounded by the established cedars peppering the lawn (a river no longer runs through it).

In 2001, the previous owners added a wing with an open kitchen/great room and master suite, doubling the house’s size to 3,000 square feet. Except for removing one wall between the original kitchen and dining area (now a study) in the older part of the house, Katz, the house’s third owner, made no structural changes. “It was basically all here for me,” he says. The living room still sports its original wood paneling, now painted Benjamin Moore’s Dove White. The beamed ceilings are intact. Even the deck retains its original footprint. Katz power-washed the exterior shingles and bleached them a serene pale gray.

On the other hand, says Katz, reconsidering, “I changed everything.” He enlarged many of the windows, converted a closet to a powder room, remodeled all the baths and covered the two brick fireplaces with slate veneer. The kitchen got new appliances and a new limestone island, and he spray-painted the existing cabinets black.

Beyond that, Katz treated almost every inch of interior surface in some decorative way, staining the brown pine ceiling beams in several rooms a chic anthracite, and the yellowish oak floors throughout the house a medium gray. “Any wall that was sheetrock got papered,” says Katz, who favors textured wallpapers by his neighbor Jack Lenor Larsen or Schumacher, usually patterned with leaves, branches or driftwood in various natural shades.

Gray is definitely Katz’s go-to color, and his nearly exclusive use of it seamlessly ties together the house’s decor. “Gray is safe but not boring,” the decorator says. “There are so many shades to choose from. It is totally neutral—easy, subtle, comfortable. If I had to see color all the time, I’d get sick of it.” While he is “not a big print person–it’s a lot to look at,” textural variety abounds, from grass cloth walls to animal hide rugs to furniture and accessories in lacquer, wood, silk, wool, fur and mohair. 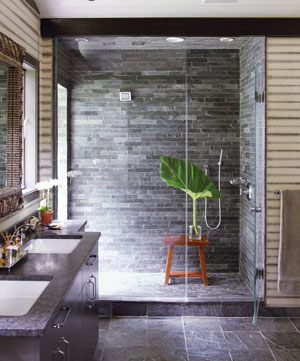 Except for upholstered pieces, many of which Katz had custom-made in Florida workrooms, all the other furnishings have been acquired from diverse sources, from websites to thrift shops. “It’s a constant hunt,” he says. “It took two years of shopping for me to finally get eight Milo Baughman dining chairs.” A wide-ranging stylistic mix, with an emphasis on the ’60s and ’70s and materials like mirrored glass and Lucite, provides drama, along with the occasional unexpected antique or touch of chinoiserie. Oversize lighting—an elk antler chandelier in the master bedroom, and lamps by such talents as Karl Springer—finishes off the look. “I’m not a purist,” says Katz. “I’m just not concerned with who made what when. But if it has a look, then get it to the painter! If it’s good, it’s good.”