St. Bartholomew's Church in Manhattan is currently under restoration. 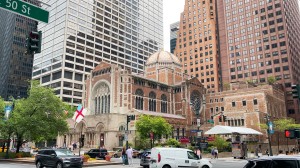 One of New York City’s magnificent structures is undergoing embellishment inside and out. National Historic Landmark St. Bartholomew’s Church is being refurbished through efforts of its Conservancy which has moved on from essential roof, drainage, and walkway repairs to restoring decorative aspects of the glorious building. The 1927 dome which had been leaking and losing tiles was restored and along with it, there was refurbishment of the Celestial division of its organ. Both were shown off to great advantage in a recent gala concert. 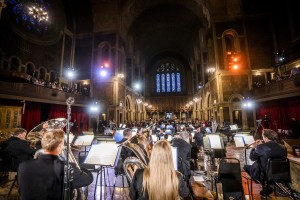 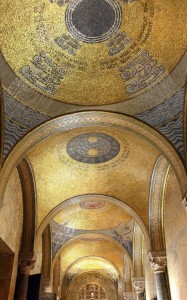 A mainstay of Park Avenue since 1918, St. Bart’s was built to replace the congregation’s original churches on Lafayette Street and Madison Avenue. Brick walls in subtle earth tones enhance its Romanesque Latin cross form and Byzantine and Art Deco accents, golden pulpit and stairs, gilded and stenciled pipes. Recognized for integrating architecture and art, its architect Bertram Goodhue espoused the concept of a designing triumvirate, a collaboration of architect, painter, and sculptor. The mosaics and murals of Hildreth Meiere and Lee Lawrie sculptures and carvings enhance the church interior.  Magnificent aspects of the design are the stenciled and gilded pipes and richly carved and inlaid console of the city’s largest organ.

A quintessential example of the American Classic organ, the instrument is actually five in one, with different sections suited to accompany hymn singers and to produce concert effects of various instruments, trumpets, oboes, meant to emulate the sound of an entire orchestra. Five blowers in the basement, two the size of jet engines, supply air which is released by keyboard action to produce musical tones in the pipes. All of this is managed by the organist seated at a single wooden console with five keyboards (ranks) plus 250 stops and foot pedals. Not confined to one location, 12,422 pipes of various sizes are installed throughout the building within the walls and ceiling which enhances the sound and makes the whole building a virtual musical instrument.

Among the compositions performed were a folk tune prelude by composer Amy Beach, a former artist-in-residence, and a G minor Bach Fugue adapted by renowned conductor Leopold Stokowski who had launched and concluded his American career at St. Bart’s. “It was a major event in a city that hasn’t had a chance to look at itself for a few years, it gave the city a moment to cherish its own,” exclaimed Benefit Chairman Barbara Tober. Celebrating the event, the magnificent dome was officially illuminated for the first time with outdoor lights. 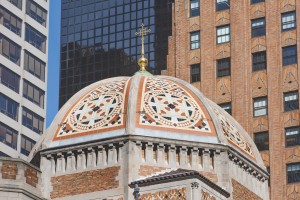 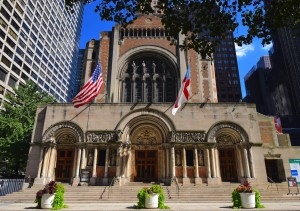 Visitors and congregants can follow stages of the work and admire the completed projects––plus browsing through the narthex bookshop, dining at adjacent Inside Park cafe, attending a concert to hear music of the monumental instrument reverberating throughout the resplendent building.

A Look at the Newly-Restored Nevelson Chapel