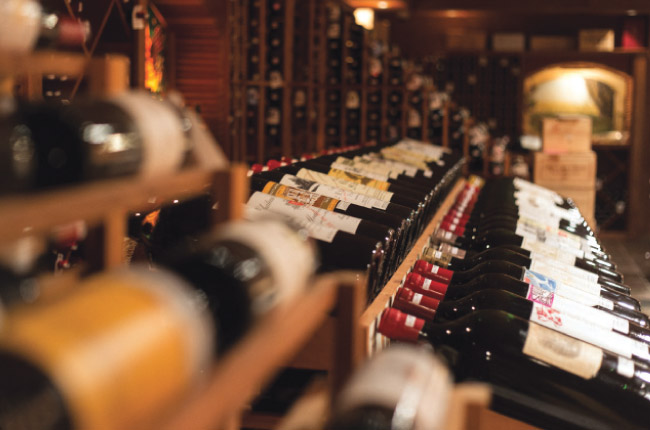 The table of six next to mine hadn’t come in to dine. They’d driven to the restaurant, an hour outside New York, just for the wine. Twenty-four glasses and a few long-necked decanters lined their linen-topped table. “They called five days before so I’d be sure to have time to get their wine ready,” explained sommelier Susanne Lerescu. She had placed the oldest vintages upright for a few days to ensure the sediment settled. What did they drink? Chateau Latour 1971 ($450), two bottles of Domaine de la Romanée-Conti (Grands Échézeaux 1994, $800, and Romanée-St-Vivant 1989, $580) and Jean-Louis Chave, Hermitage 1985 ($305).

Latour’s 20,000-bottle Bordeaux collection is among the best in the world, featuring deep verticals of many of the top chateaux, including 100 vintages of Chateau Latour going back to 1863. Gene Mulvihill, the late collector who amassed this vast trove, opened a 40-seat restaurant to showcase it publicly in 2002. For special occasions, you’ll find rare big Bordeaux Imperials (6 liters or 32 glasses, started at $30,000 apiece) that are perfect for sharing with a group of friends.

A tour of the cellar passes through a hidden door into the maze-like underground lair. A tunnel leads from one glorious chamber to another, each showcasing a particular prized region. Rare bottles are on display behind glass under vaulted lights—from Screaming Eagle to Petrus to Chateau d’Yquem. This square acre of wine storage holds 350,000 bottles, along with advanced wine-scanning machines developed for Mulvihill by a team of top scientists. One uses a microscopic needle inserted in the cork to test for TCA bacteria. Another uses an MRI scan to detect citric acid (seeing if a wine has turned to vinegar). A third, a mass spectrometer, can pick out forgeries.

While extravagant California cults like Screaming Eagle (up to $7,000 a bottle) and Harlan Estate (up to $4,000 each) are the most in-demand wines on the list, according to Lerescu, there are more affordable gems too (a 2003 Dominus will run you $280). “People often want wine from their birth year,” said the sommelier. “I warn them that many older wines can be a disappointment, unless it happens to be a great vintage year.”

Each week, cellar-master Robby Younes chooses one rare bottle to highlight for guests, offering tastes in 3-ounce pours (at $50 to $80 each). He uses an ingenious machine, the Coravin, which extracts the liquid through a tiny needle without disturbing the cork (argon gas replaces the wine that’s removed). Demonstrating its efficacy, Lerescu poured me a taste of 1990 Barbaresco, which paired wonderfully with the Wagyu beef chef Anthony Bucco served as part of an exquisite seven-course dinner.

I asked about using the Coravin to taste the rarest bottle on the list, the 1863 Chateau Latour (priced at $19,800). “It’s undrinkable” said Lerescu. “It’s a collectible, but like many great bottles, will never be consumed. Once you pull the cork, it completely loses its value.”

A version of this article appeared in the April 2015 issue of Connecticut Cottages & Gardens with the headline: Stellar Cellar.