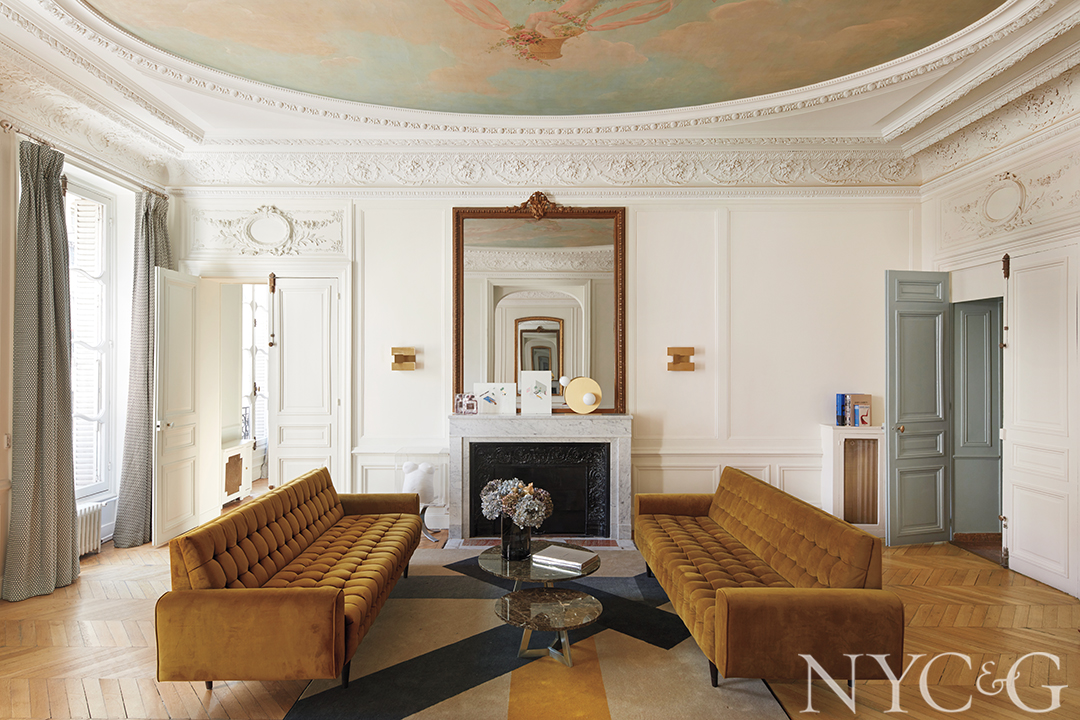 Paris, it has been said, is always a good idea. A few days are nice, but full-time is generally much better. For California native Melissa Regan, the past 17 years in the French capital have been a succès fou, from attending grad school to marrying and raising a family to launching a cutting-edge events and location-rental business.

Situated in a classic mid-19th-century building steps away from the Parc Monceau, where her boys play regularly, Regan’s apartment “was simply meant to be,” she proclaims. “I first saw it 10 months before we placed our bid, and it stuck in my brain. It was a bit daunting to make it happen financially, but our bid was accepted, and here we are!”

The full-floor apartment reveals itself gracefully, with the airy entry hall opening onto a variety of sumptuous spaces: a living room with an original ceiling mural depicting frothy, Boucher-like skies, an ample dining room, a family room/office/media room, and a discreet guest room just beyond. In the opposite direction, the foyer narrows into a meandering hallway that ties together the private quarters (kitchen, bedrooms, and bathrooms). A pleasant bonus: The building’s courtyard level houses a few classrooms for the bilingual school that her children attend.

The unified look of the decor was a group effort. “I’m not really into clutter,” says Regan. “People are surprised at how clean and crisp the apartment is.” Regan and her husband, Julien Devogele, an executive at the French luxury real estate company Daniel Féau Saint Honoré, worked with the interior design firm Desjeux Delaye who “consulted on the interiors and pushed us toward more dramatic moments, including the cocoon-like master bedroom’s bold wallpaper from Maison Sarah Lavoine.” Devogele, Regan adds, is a great shopper who sourced a lot of the antique and vintage pieces online and in the city’s flea markets and brocantes.

The mix of 20th-century classics, like the Norman Cherner dining chairs, along with plush carpets and bold fabrics comes off as light and modern against the echt-Parisian backdrop of herringbone parquet floors, elaborate moldings, large windows, and graciously proportioned rooms. 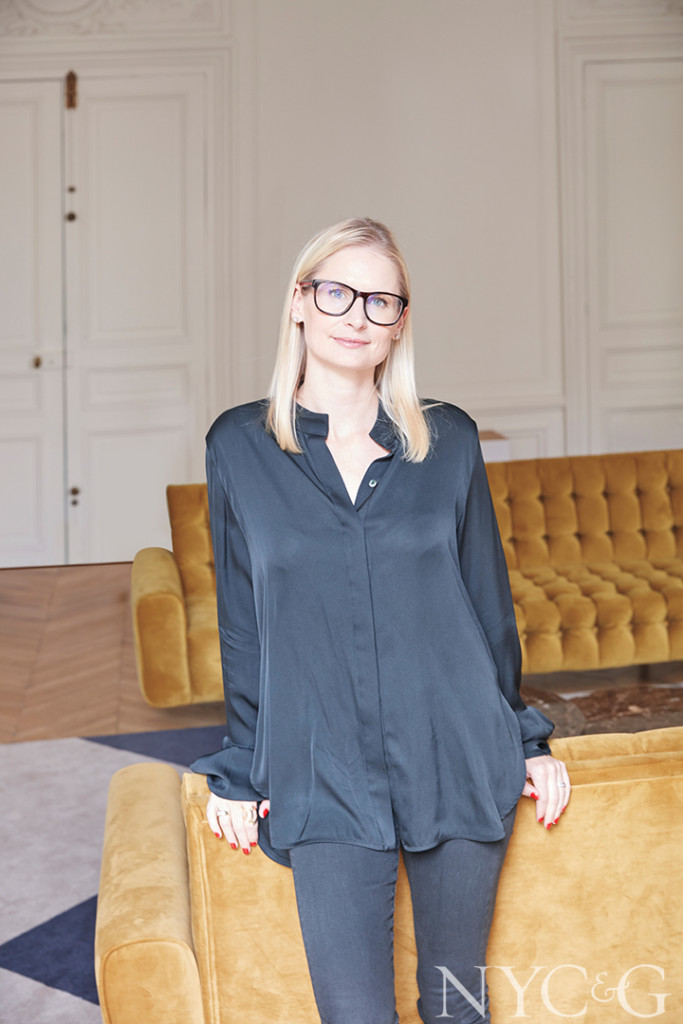 Melissa Regan launched M. R. Agency, which owns or rents 15 spaces that are used for fashion shows, art and design exhibitions, pop-ups, photo studios, and more. Among the portfolio’s properties is an Eighth Arrondissement apartment once inhabited by Gabrielle Chanel, complete with murals by Josep Maria Sert. “La dynamique Californienne,” as Le Figaro has called Regan, has a premier client list including Hermès, Netflix, Biotherm, and Samsung. She also runs a small construction company and Melissa Regan Editions, a lighting business that distributes designs by Desjeux Delaye.

Perhaps the most important contribution to the apartment’s hushed, elegant appeal is Regan and Devogele’s art collection. Oftentimes the pieces are by artists whom Regan has exhibited in her locations, although she avers that “I don’t obsess about where the art is going to work. It’s more of an emotional impulse for me, and I never measure. But recently, I bought two pieces for our country house that don’t fit anywhere, so I might have to rethink everything.”

The print version of this article appeared with the headline: French Flair.