Looking to the water, this calm Connecticut estate sails and soothes. 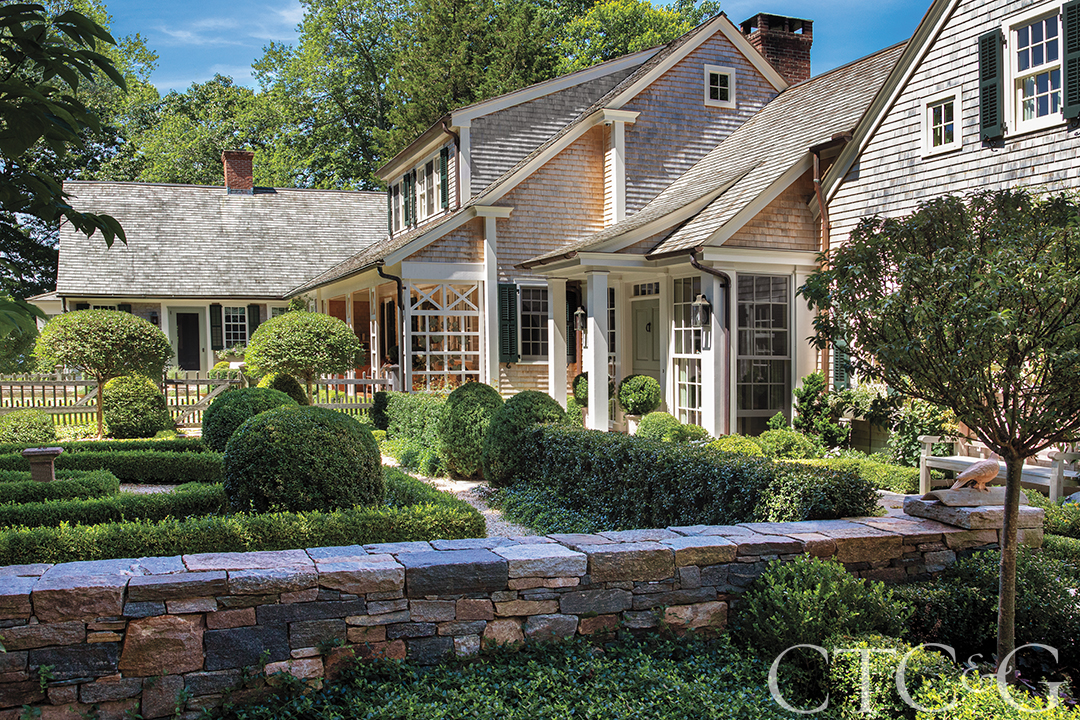 Although wings have been added over the years, the original house has stood on its site by the Connecticut River since 1748, when it was built and occupied by a local ferry boat captain. Landscape design is by Drew Kenny of Outdoor Lifestyles. Photography by Caryn B. Davis.

Houses come with spirits. Not necessarily the kind that keeps us awake at night, but rather, calming, reassuring unseen energies that bespeak a house’s origins and its original owners. Here, in a mid-18th-century house in Lyme situated directly on the Connecticut River, lived a ferry captain who was able to walk out his front door and directly to the banks of the water to board his boat.

“If there’s a repeating theme throughout this house, it would be its nod to boating,” says the homeowner. As for the references to her husband’s penchant for sailing, she points to a staircase’s rope railing, Delft tiles depicting scenes of sailboats, lamps in the entry hall configured as entwined ropes, fireplace andirons shaped as anchors, and painted river scenes on the risers of a staircase.

“My houses always have a through line,” she adds, referencing the other five past houses that interior designer Cathy Kincaid has done for her. As the Dallas-based Kincaid emphasizes, “We wanted to keep the spirit of this house.”

To do so, the designer worked to make each room comfortable and casual, while honoring the historical nature of the house. “This homeowner is a wonderful client and, to be honest, she has such good taste, so many good ideas, and is so involved in the decorating process that she could do it all herself if she wanted to,” says Kincaid.

The wife admits to having always been interested in old houses. She commissioned Kincaid for the various properties she and her husband have owned because the designer is “really good at working with pre-existing things. She’s very willing to adapt, and she knows how to make rooms that are both comfortable and elegant.”

So attuned is the homeowner to venerable buildings and so able is Kincaid to respond to them that the interior designer is currently working on the homeowner’s latest venture—as founder of the-soon-to-open Beacon Hill Books & Café. Years ago, the client, who is involved in numerous civic and cultural causes, purchased an 1850s structure in the neighborhood to turn into a literary beacon. “The one neighborhood in Boston in which you would expect to find a bookstore is the one in which there isn’t a single one,” she explains. Kincaid is working with her on the store’s finishes, furnishings and colors.

While the core of the house dates to about 1760, the owners have added wings that expanded the property to include five bedrooms. Outside, they’ve also added a birdhouse by the pool, a potting shed and a studio barn. 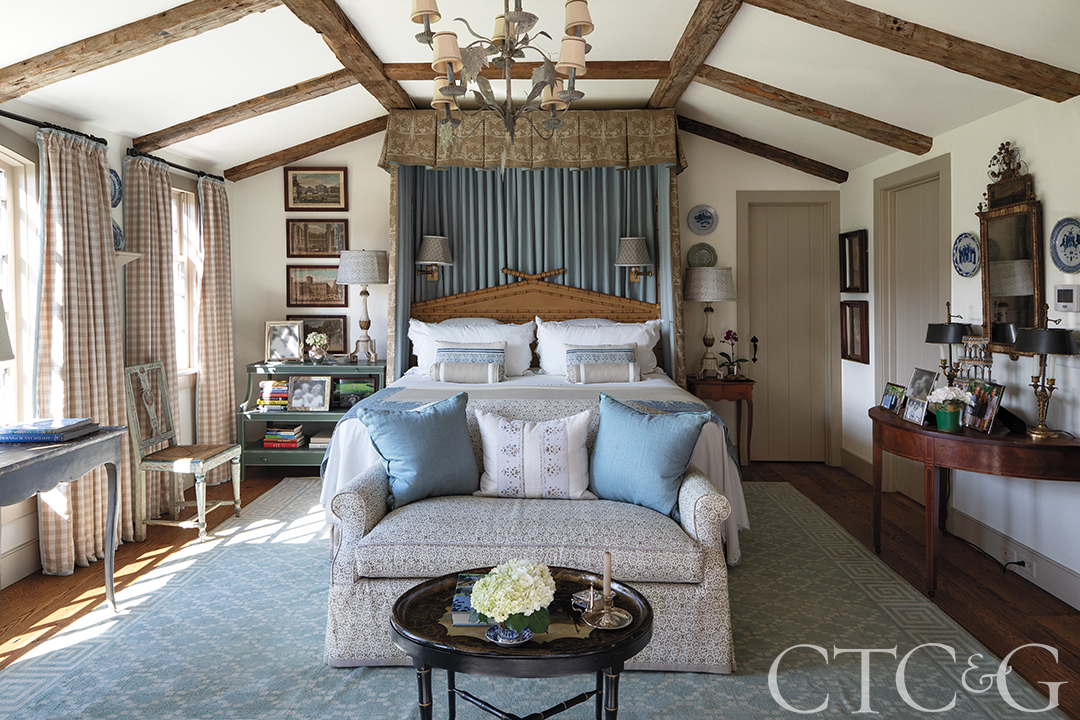 In the primary suite, a John Rosselli headboard is tucked inside a bed canopy fashioned with Claremont fabric; the rug is from Stark. Photography by Caryn B. Davis.

Because this client and designer have collaborated on numerous projects together, the design process here has been seamless. “Cathy is always willing to put up with my opinions, since I come to every project with a point of view,” notes the homeowner. “I feel that we have developed such a great working relationship. She pushes me outside my comfort zone—and I’m happy with what results from that.”

Within Kincaid’s decorative toolbox is a vast in-office library of one-of-a-kind fabrics and wallcoverings, many from Europe and India. In the dining room, for instance, Kincaid has used a novel Bennison custom-colored fabric, while kitchen pantry walls are papered with a wallpaper from Adelphi, a small company in Sharon Springs, NY, noted for its reproductions of vintage patterns. Unique English fabrics are used in the master bedroom.

As much as Kincaid prefers to layer rooms with patterns and textures, decorative objects and shapely furnishings, she also knows when to cede control to other elements. In a guest wing, a floor-to-ceiling expanse of windows is purposely unadorned, and she kept furnishings to a minimum, skewing rustic rather than fanciful. “The grounds of this house are so beautiful,” she says, “and the windows bring in so much natural light, that I wanted people to walk in here and see the trees, to let those be the focal points. The homeowner is someone who forces me to look for, and at, new things in the world.”

This article appears in the November 2021 issue of CTC&G (Connecticut Cottages & Gardens).