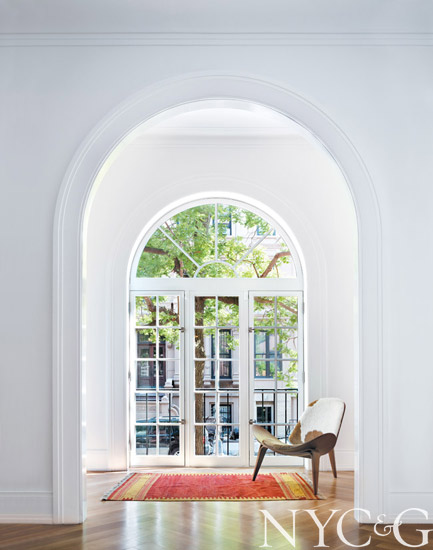 Sometimes, creating a suitably modern home requires turning back the clock. That’s what Brooklyn-based O’Neill Rose Architects did when they renovated a landmarked Romanesque Revival townhouse on the Upper West Side for a couple with three school-aged daughters. Like many city brownstones, the formerly grand five-story structure, one in a row of nine townhouses designed by George H. Budlong in the late 1880s, had suffered the indignities of being chopped up by developers into floor-through apartments over the years. Doing so meant the building’s once-gracious proportions had been drastically altered with a tangle of interior staircases and slapdash additions at the back, one of which “looked like the Unabomber’s shack,” jokes partner Devin O’Neill, who heads the firm with his wife, architect Faith Rose. “There were something like 20 different renovations over the course of the building’s life. We wanted to recapture its elegance, but create a totally contemporary home.”

Their clients’ long history with the property made it apparent that they were of like mind. Years ago, the husband’s father owned a unit in the townhouse, which he eventually passed on to his son. After the couple married and were expecting their first child, they bought the unit above to create a duplex. A few years later, they bought the top-floor apartment, and then hired O’Neill and Rose to renovate what had grown into a triplex. As the remaining neighbors sold off their apartments, the architects’ job grew much bigger. “We were suddenly combining six apartments and renovating the entire building,” recounts O’Neill, who practiced with Diller, Scofidio + Renfro, Steven Harris Architects, and other noted firms before setting up shop with Rose in 2008. The basement and cellar levels were given over to a duplex rental unit, while the remaining levels were transformed into the family’s home. 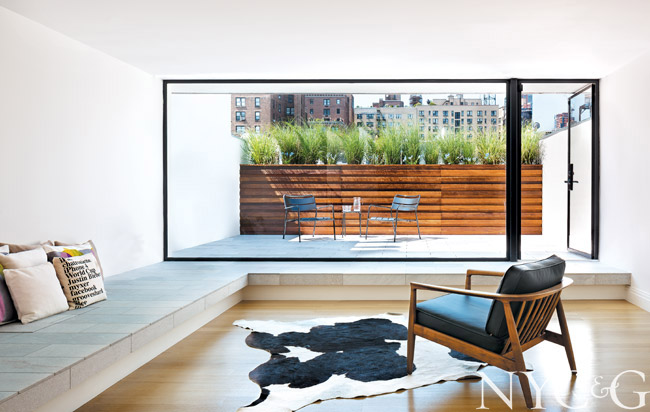 With the building’s façade in dire need of repair, O’Neill and Rose looked at the neighboring Budlong-designed townhouses while re-crafting certain exterior details, including an arched window at parlor level, and replacing missing elements like the stoop, which had been removed long ago. “Having examples nearby was very helpful, as only a few pieces of original ornament remained,” O’Neill says. 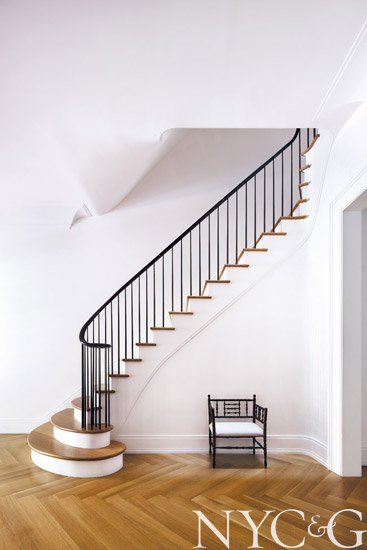 Behind the façade, everything was gutted and replaced with a steel structure, essentially making a brand-new building behind the original stone. O’Neill and Rose established a graceful staircase as the focal point of the newly reunified home, with a winding mahogany handrail and slender bronze posts inspired by Shaker design; keeping it at the center of the footprint made for open, light-suffused rooms at the front and back of the townhouse. “We really thought of it as a giant piece of sculpture,” says Rose. But despite the stair’s impressive stature, the architects actually approached the details organically, finessing its design mid-construction. “We marked up the underside with a pencil, adjusting the angle to make it meet the ceiling in just the right way,” explains O’Neill, who figured out how to fabricate the handrail in a similarly accidental way, discovering how mahogany strips could be joined, like puzzle pieces, to create a continuous ribbon-like curve. “We really enjoy making stuff up,” he adds, “and then getting things built.”

Plaster cornices, baseboards, and wall trim were also installed to make the interiors feel more contemporary while still respecting the structure’s architectural pedigree. To bring the most authentic feel possible to the newly reconstructed walls, the architects turned to a team of Polish craftsmen, whom they knew were versed in the old-fashioned art of hand-pulled plasterwork, and who turned out to be talented (and patient) collaborators. “The key is finding people who also enjoy making things, and working closely with them,” says O’Neill. “They are the real artists of this project.”

A version of this article appeared in the April 2014 issue of New York Cottages & Gardens with the headline: Landmark Commission.