Our Expert Explores the Wines of Walla Walla, Washington 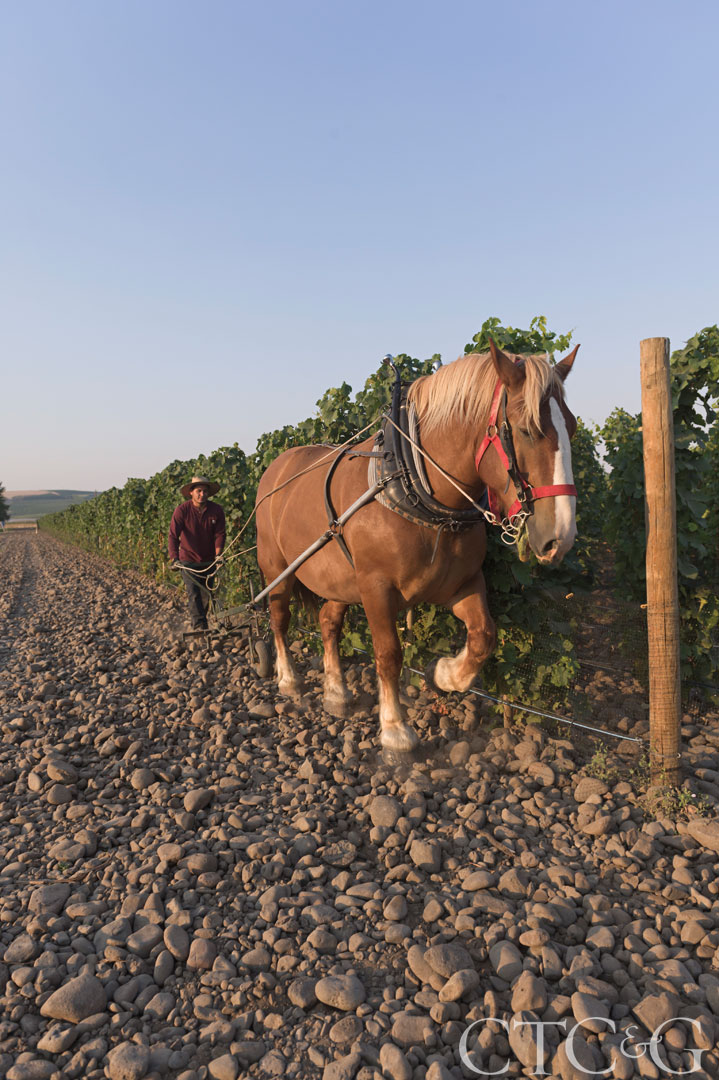 On a recent wine trip to Washington State, I watched a hefty draft horse pull an old-fashioned plow through grapevines spaced only three feet apart. The terrain was littered with rocks the size of softballs, recalling the stony vineyards of Châteauneuf-du-Pape along the Rhône Valley in France. Later, at Cayuse winery, I tasted the fruits of their equine efforts, a cult wine called Horsepower, made from grapes grown in a vineyard plowed by a team of five horses. Christophe Baron, the biodynamic pioneer behind Horsepower, has mesmerized aficionados for years, producing hit after hit in the Pacific Northwest from Bionic Frog to Impulsivo, God Only Knows to Widowmaker.

I first met Baron a dozen years ago at a biodynamic seminar in New York, and finally traveled to Washington’s Walla Walla Valley to visit his winery, Cayuse, and to attend the fourth annual Celebrate Walla Walla wine event. Located in a southeastern corner of Washington—and spilling over into Oregon—the area is known for sweet onions, wheat and highly prized reds such as Cabernet Sauvignon, Syrah and Merlot with distinctive minerality and finesse.

Every winemaking area has its claim to fame. Walla Walla Valley is all about geology. On this visit, I took a road trip with Professor Kevin Pogue, a geologist from nearby Whitman College. The professor summed up the seismic events that gave rise to the region’s unique landscape. At the end of the last Ice Age, approximately 15,000 years ago, cataclysmic Missoula floods deposited a 100-foot layer of soil rich in granite-driven minerals. Next came whipping winds from the Cascade Mountains, which stirred up silt from the floods, depositing loamy loess sediment. And finally, streams from the Blue Mountains caused massive alluvial fans that delivered millions of ancient riverbank rocks. The stones formed the basis for the region’s newest AVA, the Rocks District of Milton-Freewater.

At a comparison tasting of Walla Walla’s best Cabernet Sauvignon, I found an incredible diversity of flavor and vivid minerality. The Widowmaker 2012, from the Rocks District, had a bold savory quality, with soft tannins and earthy aromatics. The Seven Hills 2012, grown in the loess soil over Ice Age flood deposits, had a perfumed, red-fruit femininity and a velvety tannin structure. The L’Ecole No. 41 Ferguson Vineyard 2012, from high-altitude grapes grown in basalt, was a more masculine red with a big structure and dark fruit. Finally, the Spring Valley Derby 2012 from the loess-covered foothills of the Blue Mountains, had a bright acidity with cherry and raspberry notes. These  Cabernets were all stunning as well as age-worthy.

At Celebrate Walla Walla, presenter Master of Wine and Master Sommelier Doug Frost took the audience through an around-the-world presentation of top cabernet regions. “Walla Walla deserves to be in this conversation with Napa, Bordeaux and the Super Tuscans,” he said, “because the winemakers here tease out incredible complexity.” Move over Napa, Walla Walla has arrived.

A version of this article appeared in the September 2016 issue of CTC&G (Connecticut Cottages & Gardens) with the headline: Reviving the Draft.