Own a Piece of the Late Francis Fleetwood's Legacy 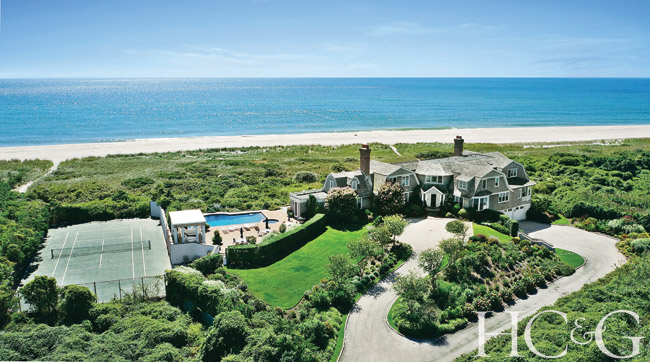 The shingle style is by far the overriding architectural vernacular of the Hamptons, and no one executed it better than Francis Fleetwood. With his death in May, the prolific East Hampton–based Fleetwood joins the growing pantheon of notable East End architects, from Grosvenor Atterbury to Norman Jaffe and Charles Gwathmey, who have left their mark on the South Fork.

In June, attorney, developer, and Brown Harris Stevens broker Frank Fineo broke ground on one of the architect’s final projects, at 101 Pheasant Lane in Southampton. Sited on just under two acres and priced at $24.95 million, the classic Fleetwood & McMullan design encompasses 8,800 square feet, with nine bedrooms, 11 baths, a sunken tennis court, pool and pool cabana, and deeded beach rights. “Francis had his finger on the pulse,” says Fineo, “and continued to evolve to the very end. I’d put his name on the first line of any listing, whether traditional or transitional. That alone adds value to a home.”

Another of Fleetwood’s more recent creations is a 6,700-square-foot traditional located in the Murray Compound in Southampton Village, once a 300-acre estate belonging to the Murray and McDonnell clans (scion Anne McDonnell married Henry Ford II). Built in 2003, the oceanfront home sits on 4.5 acres with more than 500 feet of beach frontage and direct access to Wickapogue Pond. Along with seven bedrooms and nine baths, there’s a pool, spa, sunken Har-Tru tennis court, multiple fireplaces, an elevator, and, for auto enthusiasts, a six-car garage. The home is currently listed for $36.5 million with Raymond Smith and Erica Grossman of Douglas Elliman Real Estate. “You can tell when you’re in a Francis Fleetwood home,” says Grossman. “The quality is always superlative.”

Just a few weeks ago, one of Fleetwood & McMullan’s crowning achievements went on the market for $95 million. Owned by pharmaceutical entrepreneur Stewart Rahr, the nearly 25-acre property at 38 Mathews Road in Wainscott comes with a remarkable 2,000-plus feet of frontage on Georgica Pond and Atlantic Ocean views. In addition to the 18,000-square-foot shingle-style mansion, built in 1997, the grounds include a clay tennis court, a greenhouse, a boathouse, a private beach and dock, a waterside gazebo, and an infinity-edge pool, hot tub, and waterfall. The eight-bedroom, 14-and-a-half-bath house, which Rahr bought for $45 million in 2005—then the highest price paid for a single-family home in New York—is listed with Mala Sander of the Corcoran Group and Frank Newbold and Ed Petrie of Sotheby’s International Realty. “It’s one of the most magnificent houses in the country,” Sander says. “It’s a stunning example of Fleetwood architecture, and even though it’s 18,000 square feet, it doesn’t scream ‘showy showplace.’”

It seems only fitting that the neo-traditionalist Fleetwood lived in one of the oldest beach colonies in the Hamptons. At the turn of the 20th century, long before the architect’s shingled manses started proliferating on the East End, summer residents built the Devon Colony on a 1,000-acre parcel of land in the Amagansett Highlands. Founded by Richard Levering and three other affluent businessmen, all from Cincinnati—William Cooper Procter, Joseph Rawson, Jr., and William Stanhope Rowe—the colony comprised four stucco homes and a shingle-style pile for Levering at 18 Cranberry Lane, now on the market for $11.8 million. Because of the popularity of Cincinnati-based Procter & Gamble’s Ivory Snow laundry detergent, the colony earned the nickname “Soap Hill.”

Levering’s circa-1910 house was built for his mother, Julia, an avid gardener. The nearly 5,000-square-foot, six-bedroom English country–style estate sits on five acres and comes with a parterre garden, pool, tennis, two-bedroom guest cottage, newly renovated studio, and views of Gardiners Bay. Artist Lucy Cookson, great-granddaughter of Joseph Rawson, Jr., has owned the home since 1986, in addition to another of the original five houses, built by Rawson, Jr., and called Windy Dune. “It’s a beautiful home and has wonderful gardens,” Cookson says of the Levering house, which is co-listed with Cornelia Dodge and John Scott Thomas of Halstead Property.

Fleetwood would likely agree, since the colony’s design vernacular is so in sync with his sensibilities as an architect. In the mid-1980s, Fleetwood had even tried to buy the Levering house and was beat to the punch by Cookson, though he eventually purchased property in the Devon Colony and built his own shingled home. “Francis kept to a traditional style, but elevated it,” says Cookson, who became close friends with Fleetwood during his years there and hired him to build a beach house nearby. “I adored Francis. There was just so much to him. You never knew what exciting things he’d come up with.”