Sasha Bikoff brings her love of wallpaper, gilding and feathers to a family home. 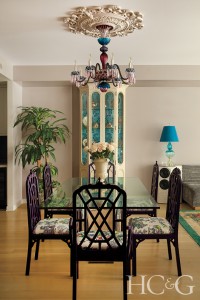 Travel can be transformative, and for decorator Sasha Bikoff, a stint in Paris was positively life-changing. While living in the City of Light for two years, she “started antiquing and teaching myself about design,” she recounts. “I became obsessed.” Once back in her native New York and working at Gagosian gallery, she couldn’t shake her newfound passion. “Art had lost its magic for me,” continues Bikoff, who has a background in fine art and art history. “There was a creative aspect that was missing in my life.” So, seven years ago, she launched her own decorating firm (she also sells vintage and antique furniture, punched up with remnant fashion fabrics, via 1stdibs). “Because I didn’t study interior design, my philosophy is driven by emotion. I believe interiors should take us on a journey and paint a picture of who we are.

”During the last several years, Bikoff’s offbeat style and magnetic personality have garnered her scads of hip young clients, including Whitney and Scott Hesse, who recently moved to a newly built apartment tower on the Upper West Side. Planning for a family (they’ve since welcomed a baby boy), the couple were anxious to get out of their nearby prewar and into their newer, larger digs. Whitney Hesse, who is one of those people who knows exactly what she likes when it comes to decor, describes Bikoff’s aesthetic as “exactly like mine, which is feminine and colorful, with some Hollywood glamour and Chinoiserie accents. I love anything that involves wallpaper, gilding, and feathers.”

Off the bat, it was clear that Hesse, a native of Charleston, and Bikoff were going to get along swimmingly. “It makes complete sense that Whitney called me,” quips Bikoff, “because she loves Palm Beach, traditional Southern style, and Marie Antoinette!” With the couple’s blessing and encouragement, Bikoff unleashed her signature over-the-top-yet-rooted-in-the-classics style on the 2,100-square-foot three-bedroom. (She describes it as “18th-century French Rococo mixed with 1960s Space Age modern, 1970s French Modernism, and 1980s Italian Memphis Milano.”)

In addition to Hesse’s requests for Chinoiserie and Southern charm, Bikoff assembled a zippy collection of furnishings that include a Murano glass chandelier with “van Gogh–style flowers,” a French Art Deco settee and chairs, vintage Milo Baughman swivel chairs, and many antiques. There are plenty of contemporary pieces, too, culled from brands such as the New Traditionalists, Interlude Home, and Hermès. 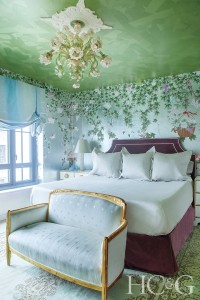 “For every new item, there’s a vintage or antique one to offset it,” the decorator says. But the wallpapers and fabrics really steal the show, from the House of Hackney botanical pattern in the entry to Brunschwig & Fils’ palm-print fabric in the guest room to a Manuel Canovas wallpaper dotted with hot-air balloons in the powder room. “The neon Pierre Frey toile de Jouy on the dining chairs is Whitney’s personality in a nutshell,” adds Bikoff. “It’s quirky, fun, and colorful, just like she and her husband are. The goal was to surround them with things they love and places they’re passionate about. I wanted them to feel like they had a piece of Palm Beach in the middle of New York.”

The print version of this article appeared with the headline: Flight of Fancy.