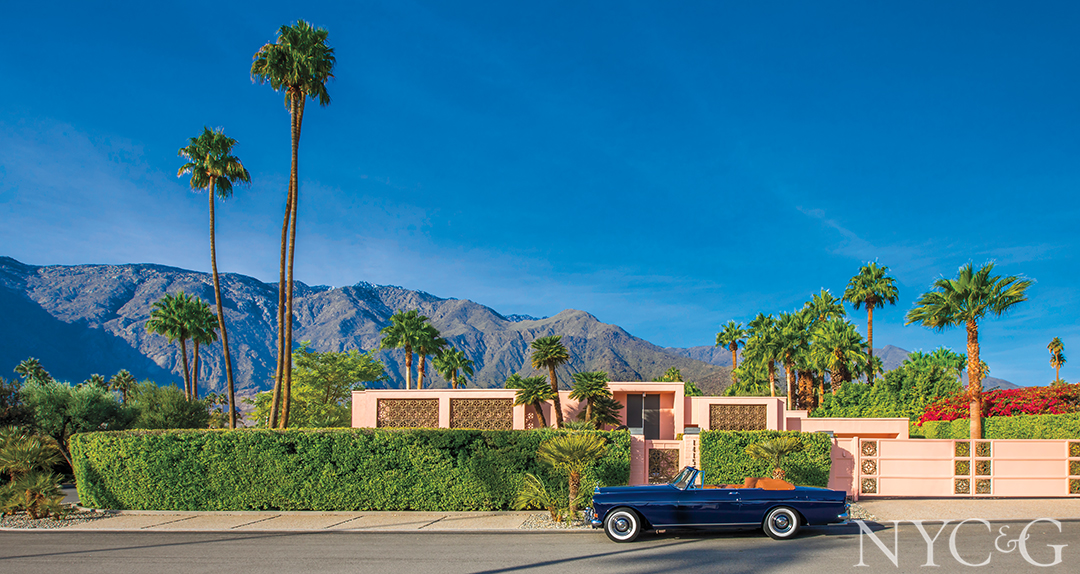 For a decade, decorator Bill Stewart, founder of Stewart Mohr Designs, split his time between his home base in Atlanta and a second residence in Palm Springs, partly drawn to the latter for its abundance of mid-20th-century architecture. A dedicated modernist, he had settled into a small 1962 home built by the Alexander Construction Company, the legendary firm responsible for erecting 2,000 or so tract homes that were the region’s indoor/outdoor dernier cri from 1955 to 1965. About eight years ago, Stewart met Joe Gyori, a tourist who lived in Alberta and worked for an oil and gas company. A complex period of long-distance dating ensued, but eventually, Gyori moved into Stewart’s house, and the men married.

Since “Joe comes from a big family,” Stewart says, it soon became apparent that “another bedroom and a bigger backyard seemed like a good idea.” Furthermore, the couple was ready to commit to a home for their future retirement. The timing was propitious: As luck would have it, they heard that a house they’d long admired was about to go on the market. “It would be lit up at night,” recalls Gyori, “although you couldn’t see it because the hedges were so high.”

The one-story 2,800-square-foot home turned out to be a 1964 beauty designed by Palm Springs architect Albert Frey and his partner at the time, Robson Chambers. The Swiss-born Frey was the first architect in America who had worked with Le Corbusier at the Bauhaus. With both Chambers and previous partner John Porter Clark, Frey was responsible for some of Palm Springs’s outstanding mid-20th-century buildings, including City Hall, Fire Station No. 1, and the Tramway Gas Station, now the local visitors center, with its astonishingly cantilevered triangular roof. 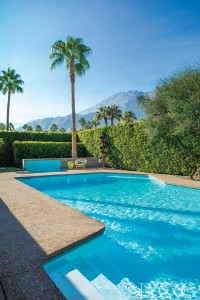 “Our house is avant-garde for 1964,” Stewart says. “The butterfly roofs typically associated with mid-century modernism were from the 1950s. Later, things became more geometric.” At first, the façade seems like a simple row of interconnected rectangles. But then there are the cast-aluminum screens, designed by architect John deKoven Hill, a disciple and close colleague of Frank Lloyd Wright. Comprising 18-by-18-inch decorative squares, they give the place a vaguely Moroccan look. Such unusual detailing helped seal the deal. The men “put in an offer the very day we saw it.”

Fortunately, the structure was in great condition, despite some 1980s updates that needed correcting, including plastic laminates that Stewart replaced with engineered walnut. He upgraded the kitchen, but saved the original steel cabinetry. During the seven-month renovation, he also added an indoor/outdoor shower off the master bedroom and replaced the warped living room screens with new die-cut versions in a similar pattern. 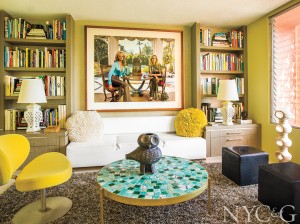 And then Stewart painted the entire exterior pink, specifically Sherwin-Williams’s Flora and Fauna. “Bill knew he wanted to paint the house pink from the very start,” says Gyori. “I wasn’t so sure, but I’ve learned to trust his judgment.” Proudly, the men even lopped a few feet off the top of the hedges for a better view from the street. “People take selfies in front of the house now,” Stewart says.

To keep things simple inside, Stewart painted the entire interior a single shade of green: Olive Oil from Dunn-Edwards Paints. Much of the furniture comes from his homes in Atlanta and New York City, where he kept an apartment for eight years before moving to Palm Springs. The furnishings read mid-20th century, although the eclectic, eccentric selection embraces a huge 1970s redwood chair and ottoman covered in sheepskin, an imposing Sèvres porcelain bust of Lafayette from 1937, and a Steven Meisel photo shot for a Versace ad campaign in 2000. 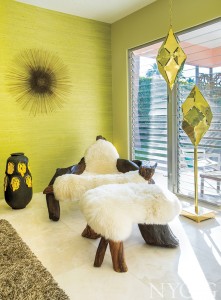 Stewart also collects classic cars. “I change them like women change purses,” he jokes. Maintaining and managing 15 valuable sets of wheels (some kept in off-site storage garages), two homes, and a complicated travel schedule is now Gyori’s full-time job. “As a Canadian,” Gyori says, “I can hardly believe that I can get into the pool every day of the year.” As for Stewart, the lush hedges—even post-haircut—and “mature olive trees that kind of grow out of them” provide deeply rewarding privacy. “I like that there isn’t one part of the house or grounds that isn’t used.”

The print version of this article appeared with the headline: In The Pink