Alexandra Pappas and Tatyana Miron of Pappas + Miron have been best friends since childhood. "We had the good fortune of being exposed to design early on," says Miron, who remembers the girls always tagging along with their mothers on flea market sprees 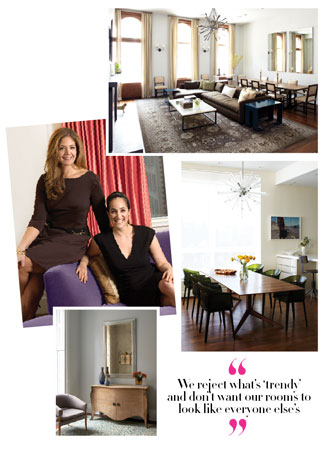 ★  WHO: Alexandra Pappas and Tatyana Miron, best friends since childhood, grew up tagging along with their mothers on flea-market sprees throughout their native Connecticut. “We had the good fortune of being exposed to design early on,” says Miron.

★  WHAT: Not ones to frequent big-box stores, the team creates interiors characterized by eclectic furnishings and a traditional design sense. “We reject what’s ‘trendy’ and don’t want our rooms to look like everyone else’s,” says Miron. “It might make our lives more difficult, but it’s so much better in the end.” When it comes to their client list, Pappas and Miron prefer to keep things on the small side. “We like to work closely with our clients,” Pappas explains, “since decorating is such a personal process.”

★  WHERE: Projects in and around New York City, including their biggest labor of love to date: A two-bedroom gut renovation in Gramercy Park (the place hadn’t been touched since the 1950s). The women gave the space’s pre-war bones an updated, contemporary appeal, including a “huge open kitchen based on the way our clients live and entertain,” says Pappas.

★  WHEN: Miron, a graduate of the New York School of Interior Design, and Pappas, who previously did p.r. for a high-end jewelry company, formed their namesake company in 2004. Their first commission? A three-home compound on a cliff on Martha’s Vineyard. “We were so green business-wise that we ended up driving all the furniture there ourselves,” recalls Miron. “But our client was so excited about the project,” adds Pappas, “that it confirmed our commitment to the business.”

★  WHY: For Pappas and Miron, it all comes down to a project’s spirit. They pride themselves on designing for their clients, rather than around them. “We don’t push people into anything,” says Pappas. “We want them to be happy the minute we leave.”