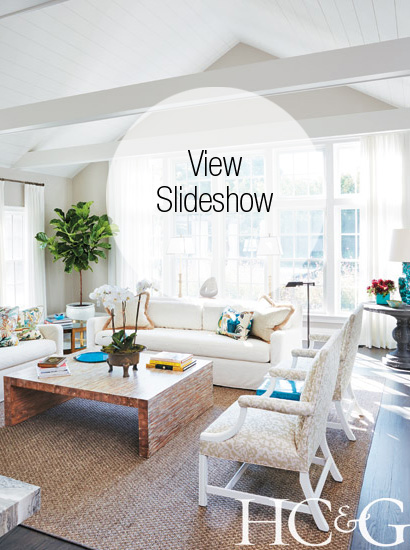 Be careful when you ask a designer a seemingly simple question, for even the most innocent of inquiries can open up the proverbial can of worms. In the case of a 1970s Colonial-style house in Southampton, a casual question about tile led to a complete gut renovation. Designers Alexandra Pappas and Tatyana Miron, the principals of Pappas Miron Design, were working on their clients’ bathroom renovation in the city when the owners purchased a house in Southampton and nonchalantly asked whether the duo thought the kitchen tile would be easy to change. “We saw the pictures and immediately knew that the whole house needed updating,” recalls Pappas. “We came clean when we officially came on board. Once we all got together inside, the potential of the place was crystal clear.”

Architect James McChesney signed on to do the renovation. “Nothing had been done to the house in probably 30 years,” says McChesney. “We kept the rectangular footprint, but we opened up the public space on the first floor and relocated the kitchen to give it direct access to the living and dining rooms.” McChesney also added a two-story bank of windows in the living room—they overlook the new pool and pool house—and raised the ceiling height upstairs. “Jim is great, and we collaborated really well with him,” says Miron. “Everything was brightened up, due to the new windows and elevated ceiling. We love the beachy, relaxed feel.”

With the reno done, Pappas and Miron took to furnishing the house, keeping the laid-back vibe in mind as a guiding principle. “Our clients wanted a great family weekend house and planned to use it all year round,” says Miron, “and because of this, it needed to be a more casual environment than their apartment in the city and also be able to accommodate crowds of guests.” (Pappas adds: “They needed as many lounge chairs around the pool as they did beds in the bedrooms!”) The designers started with a neutral palette, using workhorse pieces—sisal rugs and linen upholstery—to create a clean and easy backdrop. “We relied on comfort as a driving force—nothing is so precious that if you sit on it in a wet bathing suit, it will get destroyed,” Miron says.

The Pappas Miron stamp is what gives the sensible design scheme an unexpected twist, thanks to a clever mix of materials and styles. In the sunken living room, an antique turquoise garden table sits between a pair of vintage armchairs the designers re-covered in linen. A tall turquoise metal lamp with a Chinese glaze and bold pillows made from a Brunschwig & Fils textile add character and color. “Sure, you can have the Restoration Hardware sofa,” says Pappas, “but buy the great pillow. That’s what elevates the design.”

This same philosophy applies to the dining room, where off-the-rack curtain panels are customized with three different trims, metal chairs around a farmhouse table are softened with cushions covered in a modern blue and white print, and a mid-20th-century bench sits beneath the windows. Renegade pieces, such as a work of outsider art hanging above a metal and glass console, provide just the right amount of quirkiness. “We want a house to feel lived-in,” says Pappas. “Some of our clients just don’t have the time or inclination to comb flea markets looking for that one special piece. We do it because we don’t want a home to look like we went to a showroom and furnished the project in one fell swoop. Our look is a collected, curated one—without being pretentious.”

While polished and abundant in style, the house is equally casual and personal. “It is our job to interpret what clients want and make it beautiful within the parameters they set,” says Miron. “We pride ourselves on the collaboration.”

A version of this article appeared in the June 2015 issue of Hamptons Cottages & Gardens with the headline: Sweet, Summery Style.