Or, When your daughter is too busy for you to visit her in London, Go to Paris! 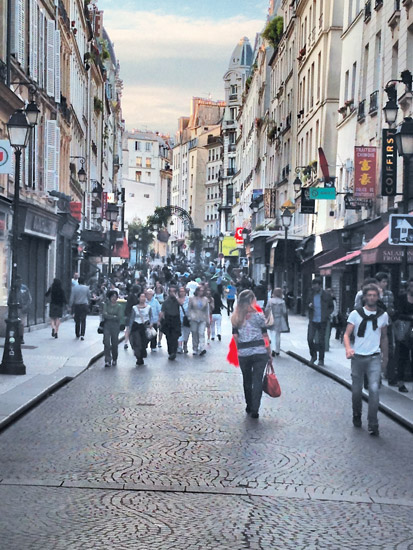 Last spring I booked a trip to Italy with a brief stop in London to visit my daughter Nicole. When she became saddled with work, I emailed Sabine Brassart, a food-savvy French friend in Provence, asking her to meet me in Paris for a day or so. I reserved a seat on the Eurostar, the high-speed train between St. Pancras station and the Gare du Nord. After the two-hour-and-15-minute ride, we met and took a bus to her daughter’s apartment.

Juliette lives around the corner from rue Montorgueil, a short cobblestoned street in Paris’ first and second arrondissements that is closed to cars. The five or six blocks are lined with celebrated bakeries, confiseries, bars, restaurants and wine shops of the highest order. Buzzing with activity, it’s like a small village in the heart of Paris.

The open-air market, one of the city’s oldest, reminded me of Les Halles that stood nearby until it was demolished in 1971. Within a small radius of Montorgueil are wholesale cookware shops, including E. Dehillerin, where I bought my first heavy-gauge copper cookware decades ago, and visited impeccable sushi restaurants, Bretagne crêperies, etc. For a foodie, it’s a paradise for browsing.

Sabine suggested we walk to the Marché d’Aligre, about 45 minutes away, in the twelfth. The market, made of up three parts, is known by many Parisians for having some of the best prices in the city for very high quality products. Prices drop even lower throughout the day. The covered section houses perishables like meat, poultry, fish, flowers and pastries, including some Middle Eastern specialties that reflect the market’s slightly exotic flavor. Outside, produce vendors try to outshout one another and offer samples to tempt passing shoppers. It’s a great place to pick up provisions like charcuterie and local wine for an impromptu picnic. Beyond the fresh produce is a courtyard filled with bric-a-brac sellers.

Near Marché d’Aligre, I stopped at L’Encrier, a quaint brick-and-wood-walled eatery that is a favorite with locals and others in the know for its mostly classic French dishes and le Viaduc des Arts, an artisan and design center close by with la Promenade Plantée on top. Like New York’s High Line, this former train track was repurposed in 1987 into an alleyway of greenery. 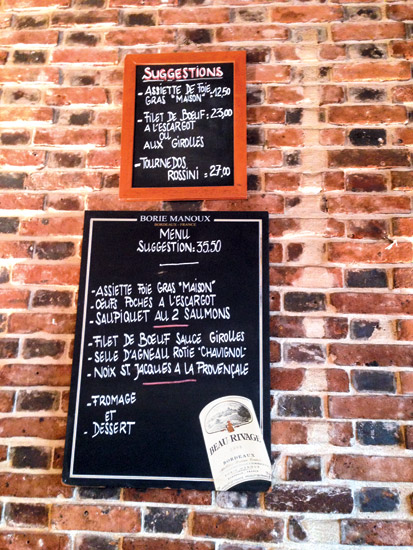 Rue Montorgueil and the furniture makers’ district slightly to the east, around Faubourg St.-Antoine, aren’t neighborhoods where chic, food-loving tourists normally head. However, plenty of shrewd Parisians who appreciate quality food at modest prices regularly find their way here. I returned to London for a delicious dinner with Nicole, then flew to Italy the next day, very satisfied with my change of plans.

L’Escargot Montorgueil has been serving robust, traditional fare like foie gras, duck and snails in several sauces since 1832. Set within a historic Second Empire building, it’s a local institution.

Pâtisserie Stohrer was founded in 1730 and is said to be the oldest pastry shop in Paris. Indulge in croissants, petit fours and its famous babas au rhum (created here by founder Nicolas Stohrer). 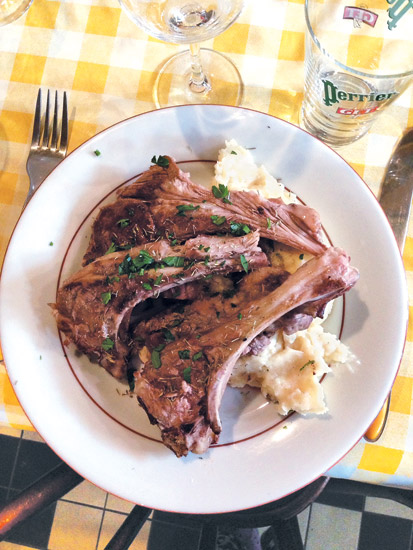 Breizh Café (109 Rue Vieille-du-Temple) is a crêperie serving classic Bretagne crêpes along with others Japanese influences, made with buckwheat flour and organic ingredients.

Mémère Paulette (5 rue Paul Lelong) offers copious portions of homey food such as an old-fashioned bistro or grand’mère would have served—from lamb chops (shown above) or roasted chicken to a hearty tartiflette of smoked sausage gratinéed with Morbier cheese to Ze Paulette’s burger.

Michi (58 bis rue Ste-Anne) is a hole-in-wall in Paris’ Little Tokyo section with only a few seats at the narrow counter. It has some of the freshest and most uncommon sushi.

A version of this article appeared in the January 2015 issue of Connecticut Cottages & Gardens with the headline Parisian Gastronomic Adventures.

This article appears in the January 2015 issue of Connecticut Cottages & Gardens.