Part 1: How I Went From City Living to a Farmhouse Renovation 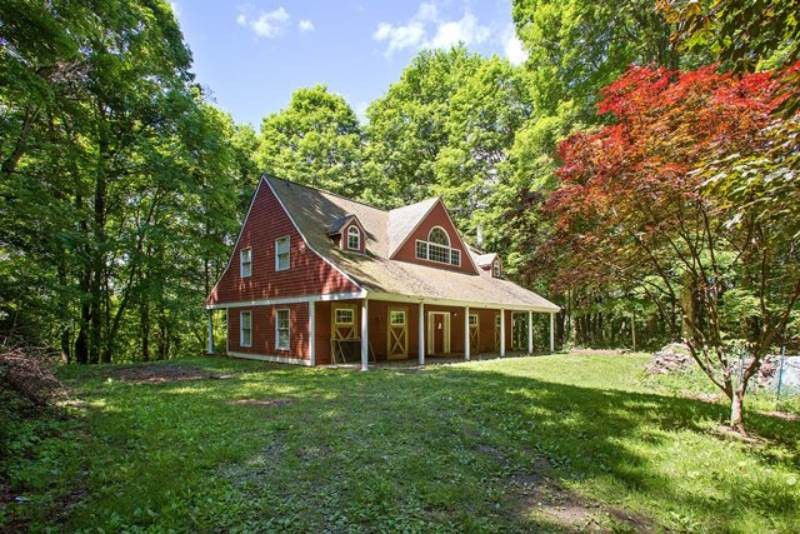 I am a city girl. Born and raised in Hong Kong, moved to Los Angeles and eventually NYC, I have lived in nothing but bustling cities and concrete jungles my whole life. I always had a dream that I would someday live on a farm with chickens who laid Easter eggs, goats, cows and maybe a pig or two all while sporting a Laura Ashley dress and Hunter boots. As the CEO of a public relations firm, Media Maison in New York, how exactly that would happen was a mystery to me and wasn’t something I shared with anyone.

But life works in mysterious ways. About five years ago I was diagnosed with Lupus, an awful autoimmune disease that literally is your own body hurting your own body. I found myself from specialist to rheumatologist to hematologist. I felt as if my life had been taken over by this disease that left me exhausted and always feeling sick. Every doctor I went to said the same thing – you have to reduce the amount of stress in your life. I would laugh and ask how? How could I run a business in a city with 24/7 energy, commitments and events I produced on a regular basis and expect to not be stressed? Then unfortunately one day the decision was made for me. It was July 6th of 2017 when a friend found me unconscious in my city apartment. Not to get into too many gory details but I had complete organ failure and was in the hospital for over 40 days with complications from my disease.

The recovery was going to be hard and long and the thought of doing it in the city was truly more than I had the energy for. After a long talk with my husband we decided that we had to make a complete life change for at least as much time as it would take me to recovery. We would rent out our city apartment and move upstate where the calm and peace would allow me to get better.

The big question was where. I have to admit I knew nothing outside of the city. Past Target at 116th Street in Harlem and I was lost. We decided we didn’t want to be any further than an hour and a half from our apartment. We rented a car (no one owns a car in Manhattan) and we drove upstate. I had researched towns and found several rental homes with land that all looked gorgeous. The first house was on the same property as the owner and not what I was looking for, the second was a house that was so big it would take me a day to walk from one end to the other. Then we stumbled upon Millbrook, NY and drove through their downtown (three blocks) and got out to walk around. We peered at listings in a RE window and were taken by a house for rent. Long story short we saw the house and fell in love. It was a charming farm house, furnished and all on 20 acres of farm land with a massive pond. I just knew at that moment it was the place that would change my life.

We couldn’t sign a six-month lease agreement fast enough and by October 1 we were on Mabbettsville Road in Millbrook, NY. The area was so charming with quaint houses, horses, cows and as we arrived in the middle of fall – the leaves were what postcards are made of.

Before we knew it Thanksgiving was upon us and Christmas shortly thereafter and soon snow – lots and lots of snow. I was beginning to feel stronger and better and my heart was falling in love with this part of the Country. The town of Millbrook has exactly one of everything. One post office, one bookshop, one pharmacy. Each one with its own charm and what I imagined Norman Rockwell’s painting were about.

It was early December when I approached my husband and said I don’t think I want to move back to the city. I had been able to work from home, my established PR firm had the most loyal, hardworking employees and when I got sick I had made one of my most talented employees a partner in my business. Nothing was holding me to NYC and I felt free making the decision.

Immediately we started looking for homes. We saw adorable places that were completely finished and lived in and new developments that seemed cold. Late one night I was online and discovered a site called HUBZU, an online auction site for homes. Immediately I thought it must be a scam of some sort. Bidding online and then sending money to a home that isn’t really for sale. My husband happens to have his real estate license so we decided to investigate further.

As it turns out HUBZU is a real site and real people use it. If you are an agent or have one you can get the code to their locks and tour the homes yourself. Everything is pretty much a fixer upper and the prices are what the auction dictates.

We found a house in Millbrook. It took us a minute to find it as it was hidden behind a hill in an oasis of trees. As we pulled into the property on five acres my heart grew, a red farmhouse was nestled among the snow. We parked and went inside… it was a disaster. The kitchen had cabinets from the 1980’s and linoleum tile, the floors in the house were scuffed and yellow wood. Every single bathroom had one thing – a toilet and that was it. Except one bathroom that had a shower you would see in an RV. It was obvious there was no electricity and no plumbing. We had no idea if the well worked or the sewer system. The house was filthy and had been sitting empty for many many years.

The front and back of the house had pillars but no railings and no deck. The grounds were over grown and trying to see a house in snow is not the easiest. And anything on this website was “buy as is”. I looked at my husband who was about to walk out the door and I said – I can see it. I can see how this house would look if it were ours. I knew it was a massive undertaking but I also saw for the first time that I could make a house our home with everything from a claw-foot tub I dreamt of to what tiles we would use in the kitchen. I had no idea what the landscaping would look like until Spring but it didn’t matter.

That night, December 22nd, 2017 we put our offer in on the house and nervously watched the clock tick until the bidding closed. We knew we could only afford to do this entire remodel if we got the house for a specific price. Tick tock tick tock…We won. I looked at my husband and said our lease ends March 1st. We have exactly two months to make this happen. On January 3rd the journey began…Laura Ashley and those Hunter boots were just around the corner.

Samantha Martin is the Founder and CEO of Media Maison, a boutique lifestyle public relations agency with offices in New York and Hong Kong. In addition to building her own PR and Marketing she has succeeded in growing other small companies, developing ideas from concept and seeing products through to retail shelves. She is excited to chart her home renovation adventures.