Passionate for Both Horses and the Hamptons, Annette and Matt Lauer Bring Bright Side Farm to Life 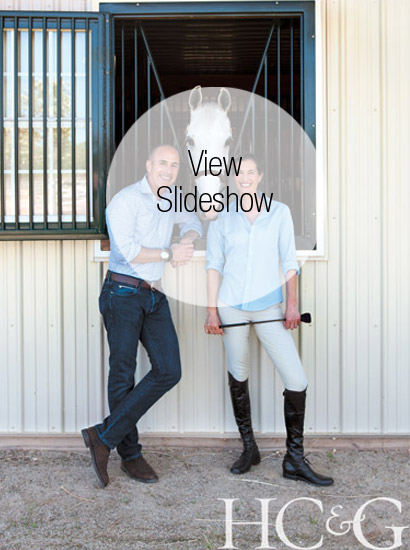 With a name like Bright Side Farm, good times are sure to follow. For Annette and Matt Lauer, creating an equestrian facility in the Hamptons has been more than good: It has turned into a dream come true. The couple knew that transforming a former nursery into a 40-acre, world-class training ground for horses wasn’t for the faint of heart, but after two years and a lot of hard work, their newly completed Bright Side Farm has the gleam and polish of a thoroughbred champ.

Matt, who has been the co-anchor of the Today show for 21 years, and Annette, a skilled horsewoman who was a much-in-demand model during the 1990s, hardly need an introduction. They are regulars on the social and charity circuits in New York and on the East End, and in 1998, they chose to marry in their beloved Water Mill, where they built a house. Initially a weekend home, it has since become their full-time residence, with Annette and the couple’s three children—Jack, 13, Romy, 11, and Thijs, eight—having moved there four years ago while Matt takes care of business in the city during the week, heading east on weekends.

Annette’s modeling career kept her traveling the world for 13 years, thereby preventing her from pursuing her lifelong love of horses, except for the occasional ride. “I started riding in the Bois de Boulogne in Paris when I lived there, and when I moved to New York, I’d venture to the Hamptons whenever I could,” she recalls. But after settling on the East End full time, she started exploring the idea of building a barn—just a small family barn. So it was kismet when she and Matt heard about a piece of property that had recently become available close to their house.

“We drove past this place every day,” Matt says of the former Frankenbach nursery, which under Southampton Town code could only be used as a nursery, as a farm, or for equitation. “It was the right size,” Annette explains, adding that, as luck would have it, a farrier—a person who shoes horses—lives on the neighboring property. “He’s right next door!” Despite their considerable talents, though, the couple were aware that they had a steep learning curve ahead of them. “We knew so little,” Annette admits. “In our case, the fantasy kind of snowballed into reality before we could even say, ‘Whoa!’”

From the beginning, they focused on hiring “real horse-world people,” Matt says. They started with Dave Zublin, owner of Dutchess County–based Old Town Barns, a builder of first-class stables who is well known on the equestrian circuit. The end result: a utilitarian, but extremely elegant barn. (“Not a fancy barn,” as Annette puts it.) Bright Side Farm currently comprises 36 stalls and employs a head trainer, an assistant barn manager and trainer, and one other trainer. The grounds include a 24,000-square-foot, temperature-controlled indoor ring, two outdoor rings, a cross-country field, a derby field, and access to trails in the woods beyond. For the grounds, the Lauers hired Miranda Brooks, a landscape designer and fellow equestrian who immediately sensed what would work best, avoiding plantings that posed potential harm to horses and installing pleached lindens to shade observation areas. “We wanted to create something a little different, but at the same time give the place a meadow-like feeling,” Brooks says. The focus, say the Lauers, has always been on what’s best for the horses, like stalls that are wider than standard sizes to give the animals more space, cushioned interior walkways that are made from rubber, and footing—a composite material made with sand—used in the rings (it’s softer on horses’ hooves).

These details “really make a difference to high-end riders,” says Annette, who spends a good portion of her day at Bright Side Farm, taking time to ride while maintaining a growing enterprise. “It’s not like we’re running a corner store—we’re running a business that caters to very valuable animals and their riders,” Matt adds. The Lauers own five horses of their own, including a pony, Casanova, ridden by daughter Romy. Annette leaves the competition to her. “Romy rides in the Hampton Classic and other shows in the region,” she says. “She loves the pressure and the performance.” Annette is partial to Lupo, her 15-year-old Hanoverian. “I trust him with my life and with my daughter’s, who even rides him now. He’s 17 hands, but he’s all heart.”

As for Matt? He rides, but finds he’s more comfortable off the saddle, working on the farm. “I like the outdoorsy part of it,” he says. “I’m often out with the tractor smoothing out the footing in the ring—it’s fun! We want to be surrounded by people who have a love of horses, and that’s the reason we built Bright Side Farm in the first place.” “It still hasn’t sunk in,” Annette adds. “But there’s nothing I love more than seeing people happy when they are riding. It has been a blast.”

A version of this article appeared in the July 1, 2015 issue of Hamptons Cottages & Gardens with the headline: Field of Dreams.