With a keen eye for collecting everything from Empire to exotica, designers Ron Wagner and Timothy Van Dam turn their Renaissance Revival Townhouse into a showcase of the decorative arts. 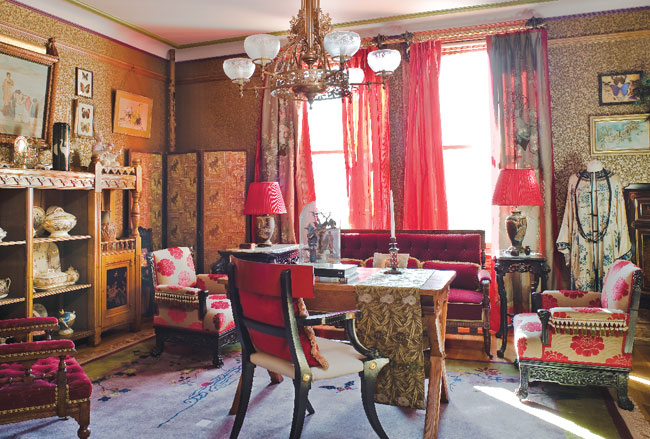 
“We wanted a real, actual house,” says Wagner, “but we didn’t want to have to cross a bridge or a tunnel to get to it.” Sitting fortuitously near them at the bar was the New York writer and historian Jervis Anderson, who “leaned over and said, ‘Check out Hamilton Heights.’ We thought, Great! . . . Where’s that?” 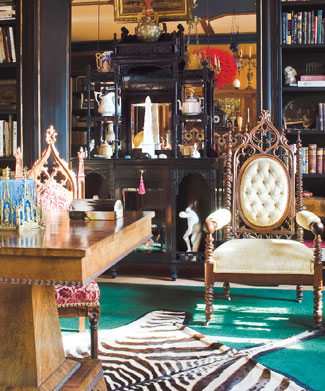 Soon Wagner and Van Dam, who met while studying interior design at Pratt Institute and now run Wagner Van Dam Design & Decoration, found themselves among the early pioneer renovators in this leafy enclave on Manhattan’s upper Upper West Side. Named for Alexander Hamilton, whose 1802 Federal-style house stands just around the corner in St. Nicholas Park, the neighborhood boasts a heady assortment of 19th- and early-20th-century landmarked architectural gems. Built in 1895, Wagner and Van Dam’s Renaissance Revival limestone beauty is part of a row of five designed by noted residential architect Clarence True.


The couple
were confirmed
modernists, but were also intent
on remaining true
to the house’s
original grandeur

In a decidedly innovative turn, True did away with the high front stoops so favored by New York City brownstone builders for decades. Visitors enter through a cozy reception area and continue up a honey-colored paneled staircase to a marble-tiled central landing on the parlor level. Without a stoop entry to contend with, the regal bow-front parlor—outfitted with a gas fireplace and original ceramic logs—sweeps the full width of the house.

Things weren’t quite so breathtaking when the men first took over the structure, which originally came with two tenants, and set to work. The glorious central landing, for instance, “was a makeshift hallway and a bathroom,” recounts Van Dam, and the upper floors included a tangle of small apartments with dropped ceilings, bright green paint, and lots of linoleum.  “We were young—thinking we could do it all by ourselves,” Wagner adds. “We began by filling many, many Dumpsters.”

While the couple were confirmed modernists, they were also intent on remaining true to the house’s original grandeur. And they liked it. “This place completely changed our aesthetic,” says Wagner. A lithe bronze Hermes atop a pedestal table in the center of the parlor “was our very first antique purchase,” the opening salvo in their personal rout of modernism. Next came exquisite pieces by 19th-century furniture houses like Pottier & Stymus and Herter Brothers, plus an enduring romance with Gothic Revival and American Empire styles.  The more they found, the more excited and energized they felt. The pair were especially enamored of French Empire furniture at first, but started collecting less expensive American Empire, this country’s hardier vernacular take on the French style. It was a product of an optimistic period, when America was celebrating itself and its ideals. “We found everything about it appealing,” enthuses Van Dam.

Which is not to say that the couple’s leanings are limited to classic American antiques. Throughout the house eclectic treasures fill every crevice: a crewelwork pillow, an African headdress, a taxidermied peacock. The upstairs sitting room is an Orientalist fantasy of Aesthetic Movement and eastern-inspired decor, while the library features a Moorish-star ceiling decoration and four massive bookcases fashioned from a paneled room they purchased in its entirety and later had second thoughts about. The designers realized they “respected the house” too much to shoehorn an alien room inside it, and were unfazed when the individual bookcases proved to be too large to move up the stairs. “I just sat downstairs with the saw and started cutting,” Wagner says with a laugh. Even a discarded gilt sunburst frame—part Hollywood Regency, part Super Fly—is being resurrected as a ceiling medallion. “It’s a piece of garbage, but it’s got style!” Van Dam says. “We don’t go looking for things; we’re just always looking.”


Throughout the house eclectic treasures fill every
crevice: an African headdress, a taxidermied peacock

Literally the crowning glory to their ongoing labor of love is a magnificent workspace on the top floor, which opens up to a lofty 12-foot peak behind the building’s mansard roofline. The pair moved their office here from Union Square nearly five years ago, a comparatively modern counterpart to the antiques-filled floors below. “We now work where the maids would have lived,” observes Van Dam. “Of course, we wish they were still here, too!”