Recently, top shelf piscos have finally begun making a real play in the U.S. The Peruvian grape distillate so popular across Latin America can be rough around the edges. But the premium piscos have great nuanced depth. 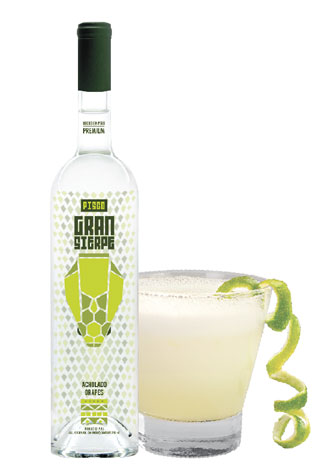 I was in Patagonia when I sipped my first pisco sour, a cocktail I’ll forever associate with adventurous travel. I had flown into Punta Arenas, the gateway to South America’s wild southern tip. A six-hour drive later, through the spectacular Torres del Paine National Park, I reached the upscale Explora Lodge, a luxurious trekking retreat. After that arduous journey, I was happy to find a pisco sour awaiting me in the lobby. The exotic cocktail, frothy with egg white and bracing with lime, reminded me just how far from home I was.

Recently, top-shelf piscos have finally begun making a real play in the U.S. The Peruvian grape distillate so popular across Latin America can be rough around the edges. But the premium piscos have great nuanced depth. Gran Sierpe, for one, is a beautiful product from a family-run estate dating back to the 18th century. The pisco is made in three expressions from grapes grown on the property: two bottlings are from single varieties of Italia and Quebranta grapes and the third is a blend of grapes, slowly distilled and painstakingly filtered, preserving bright fruit flavors, in the classic acholado style.

Portón Pisco, another grade-A product, comes in a wide-shouldered, frosted-glass bottle. It has been produced for more than 300 years at Hacienda La Caravedo in Ica, Peru. This small-batch pisco is made by stopping the distillation before the grape fermentation is complete, resulting in the highest quality pisco—in the mosto verde style—with spicy notes of white pepper and cinnamon.

BarSol Pisco, a small artisanal brand, is made at the Bodegas San Isidro, a property dating back to 1919. Its Primero is made from a single varietal (Quebranta grapes), which makes it a puro-style pisco. Though production is just 11 years old, this smooth aromatic pisco—with notes of pear and citrus—has already racked up all sorts of international accolades, including double gold at the San Francisco World Spirits Competition.

With this battery of top piscos at my fingertips, it was time to revisit that great mixed drink from my Patagonia trip. I turned to Jonathan Pogash, the so-called Cocktail Guru, for help. Along with supplying a traditional pisco sour recipe, he urged me to try a pisco punch. It’s great for a party—easy to mix in advance and simply pour over ice. Add a few empanadas and spicy ceviches, and you’ve got a full-fledged Peruvian fiesta.

While the sour is indigenous to Peru, the punch is in fact a North American invention, created in pre-Prohibition San Francisco in the late 19th century. The drink has been enjoying a resurgence in the U.S. of late, propelled by the growing popularity of Peruvian cuisine. Seminars devoted to the pisco surge—Chef Gastón Acurio hosted one recently at the South Beach Wine & Food Festival—debate the origins of this strong Latin spirit. The first grapes on the continent were planted by conquistadors in what is part of modern Chile, then later distilled to produce the very first pisco. Peru has laid claim to that land over the years, and to the origins of its national drink.