Philip Gorrivan's Treehouse Is a Fantasy Come to Life 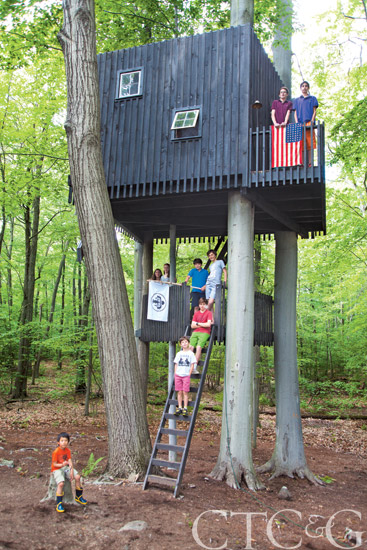 Isn’t it every child’s dream to have a tree house? And when your dad is an interior designer, you can bet yours will be much more elaborate than a basic backyard fort. A couple of years ago, designer Philip Gorrivan designed a tree house at his Washington, CT, house for his two kids, but admits that having a tree house was always a fantasy of his. Not wanting anything too cutesy, he dreamed up a structure with a sleek Scandinavian-like feel and had a local carpenter bring his vision to life. Standing 40 feet tall, the structure is clearly the work of a designer. It’s fanciful without being fussy and blends into the property, resembling more of a garden folly than a kids’ hangout. Inside is rustic—a slight twang of hunting-cabin chic—with a touch of nostalgia. It’s cozy and sophisticated, but not overly so. It may have been Gorrivan’s fantasy, but it is meant for the children after all.

“I wanted it to be a cool space for the kids. But selfishly for me too—in the event I ever get banished to the tree house!” says Gorrivan. Sheepskin rugs and beanbags add extra seating and texture for a layer of coziness. The designer made sure the ceilings were high enough to accommodate bunk beds for sleepovers. Accessories were not limited to the bare necessities you might find in most tree houses, either: A red gingham tablecloth that belonged to Gorrivan’s mother covers a small table, and vintage snowshoes that belonged to Lisa Gorrivan’s grandmother sit in a corner. Antlers adorn the walls, and a Caribou chandelier hangs from the ceiling. “We go to flea markets a lot, and everything is a flea find or stuff we had in the garage. It was an opportunity to really think outside of the box and do so on a budget,” says Gorrivan. “I got to experiment without the fear of it being a huge commitment.” 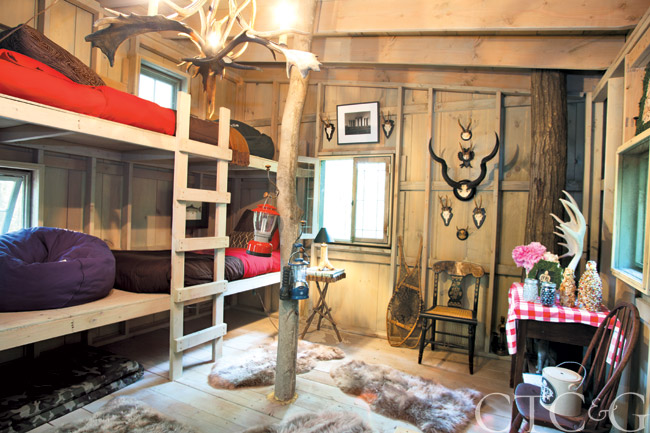 With a structure like this, why not let the adults have fun with it too? The Gorrivans are no strangers to entertaining, and the tree house offered up too good a spot to resist throwing a lunch for kids and adults, “kid-like but with an adult twist” says Gorrivan. “We initially wanted to have dinner in the tree house, but logistically it wasn’t suitable. I brought out an old barn table and set it up nearby.” He and his kids came up with the theme of “secret clubhouse.” They created a logo, t-shirts and even ballot boxes with marbles. 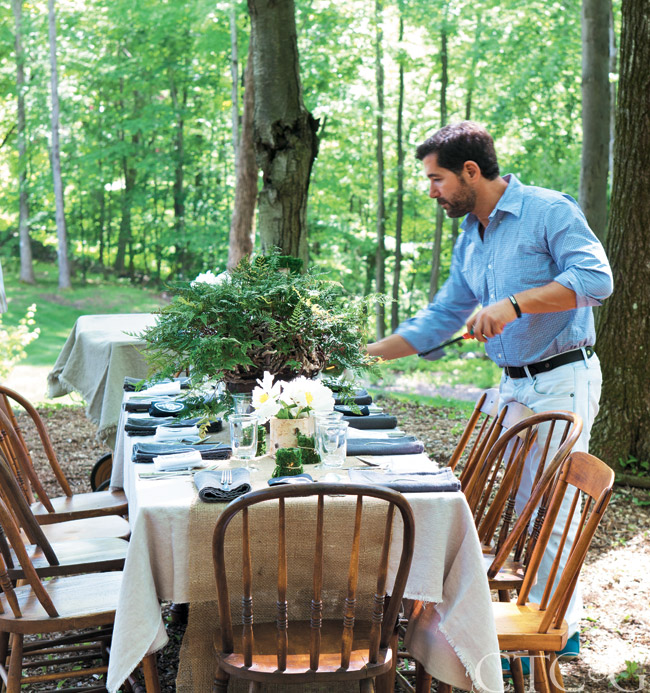 For the table, everything was inspired by nature. But mostly, creativity ruled. “Mother nature is the absolute best designer,” says Gorrivan. Moss gathered from the woods was glued onto simple votives tied with twine. Burlap from the local hardware store made the perfect table runner. A centerpiece was created out of potted ferns and in-season flowers. Disposable faux-bois plates and wooden utensils took the theme one step further. The menu—gazpacho served in Mason jars, Captain Crunch–fried chicken, corn on the cob, strawberry shortcake—suited all palates. “We strive for relaxed. A stressed host makes for a stressed party,” says Gorrivan. “We like to serve simple food and things that don’t take lots of prep.

“When entertaining, think of your yard as an extension of the house,” he continues. “Treat it like a series of outdoor rooms, and guests will feel like they’re in a new destination every time. There is no substitute for making a creative effort. Creativity and fun always rule, and going that extra mile makes all the difference.”

A version of this article appeared in the April 2014 issue of Connecticut Cottages & Gardens with the headline: Welcome to My Treehouse.

This article appears in the April 2014 issue of CTC&G (Connecticut Cottages & Gardens).