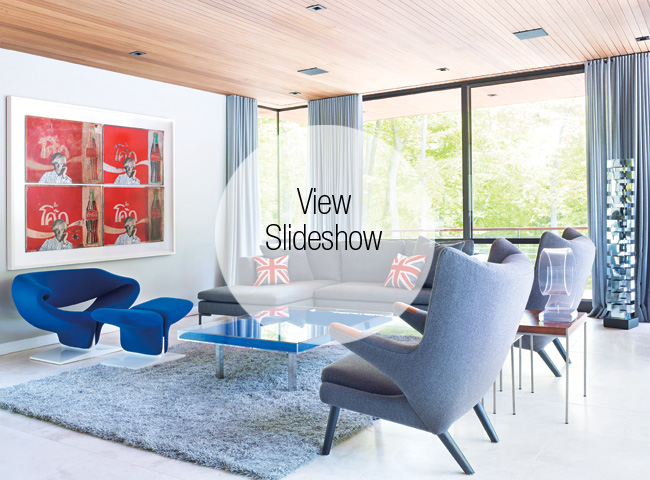 "When we met our clients,” recalls Hamptons-based architect Kevin O’Sullivan, “we had no idea that they had a spectacular collection of modern art.” And his clients had no idea that the man they were trusting to design their four-bedroom home had once been accepted to pursue painting and sculpture at the prestigious Edinburgh College of Art in his native Scotland.

O’Sullivan met his clients in 2010, when he and his husband, businessman Jim Thomas, briefly put their 10,000-square-foot Amagansett home, which O’Sullivan designed, on the market. “She came in with her husband,” the architect recalls, “completely glamorous, dressed all in Prada. We just called her the Prada Lady after that.” Two years after the men had taken the house off the market, the Prada Lady and her husband offered to buy it, but the couple had already agreed to sell the sprawling modern home to someone who knocked on the door and made an offer they couldn’t refuse. “So I said, ‘Why don’t you let me design a house for you?’” O’Sullivan recalls. He knew just the place for it, a two-acre plot right around the corner.

Working with colleagues Luke Ferran, an architect originally from Southampton, and Anastasia Ovtchinnikova, an interior designer who was born in Saint Petersburg, Russia, O’Sullivan began creating a site plan for the house, slated for the top of a knoll. “I love a hilly location,” O’Sullivan says. “It makes it easier to cut up the volumes of a house and avoid that monster McMansion look.” Known for bringing the outdoors into his projects, he also considered the surrounding landscape, which includes 420 acres of adjacent reserve. “In the Hamptons, outdoor rooms are a way of life. It’s something I got very accustomed to while I was working in Asia after university.”

O’Sullivan made deft use of materials to minimize the transitions between the various volumes. “The pool deck and the floor of the adjacent interior rooms are both travertine,” he explains, noting that it’s his favorite flooring, in this case “filled for the interior and unfilled for the exterior, which makes it less slippery underfoot.”

The interior color palette also comes from nature. “The dominant hue is the gray bark of the beech trees on the property,” he says. “Picking up the colors of the native vegetation, and the liberal use of glass, makes the rooms seem much bigger than they actually are.” O’Sullivan’s brand of modernism runs deep, and was not popular while he was studying in tradition-bound Edinburgh (his parents having rerouted him from the fine arts to architecture). “I was all Zaha Hadid,” he remembers, “and the faculty were all 16th-century castles. The current Thane of Cawdor was one of my classmates. My dean suggested I find something else to do with my life.”

Undaunted, O’Sullivan landed himself a prized internship year at Michael Hopkins and Associates, one of Britain’s top practices. The first project he worked on was the now-renowned Glyndebourne Opera House. After five years at a firm in Singapore, he finally made it to New York, getting a job with Gwathmey Siegel. “I’d always wanted to live in the U.S.,” he says, and eventually made his stay a permanent one when he opened his own company in the city, in 2001. By 2008, he was working so much on Long Island that he decided to move to the East End. “When I started, we were doing apartments and townhouses in Manhattan, and clients often asked us to do their homes in the Hamptons. Now we do homes out here and clients ask us to do their apartments in town.”

Much of the furniture for this residence came with the clients, including signature 20th-century pieces like the living room’s vintage Papa Bear chairs by Hans Wegner, circa 1950, and an iconic Yves Klein cocktail table from a decade later. The kitchen features a Saarinen table and Tulip chairs; the dining room a Paul Evans–inspired wooden credenza, positioned under a wall sculpture by British art star Keith Milow. The art collection figured into the plan right from the first sketches. “When you’re designing a house that is going to showcase serious art, you need to coordinate it with the architecture, decor, and furnishings,” says O’Sullivan, who even built in certain features to accommodate specific works, like a niche in the entry hall for a Pakpoom Silaphan paper-airplane sculpture.

“Typically,” O’Sullivan adds, “my earliest schematics show furniture placement, but in this case they also show art. The interior elevation drawings indicate where to hang the important pieces, so when the art installation folks came in, they had a place to start.” On the lower level, O’Sullivan also provided the house with its own gallery, where the clients display a constantly changing selection from their impressive collection, as well as a spa, a gym, and a guest suite, adding another 2,200 square feet to the 4,300 on the main floor.

The Prada Lady’s input was cause for some “lively discussion,” O’Sullivan allows. “She brought in two yellow Pierre Paulin chairs for the library, and I hate yellow, but I have to admit that they look quite good. And she found the Jo Hammerborg brass and copper pendants for the kitchen on eBay. We had to rewire them, because they weren’t UL approved, but they’re great.” Meanwhile, O’Sullivan himself now lives in a house on Main Street in East Hampton that was built in 1770—a far cry from his of-the-moment aesthetic. “I know it sounds crazy for a modern architect, but I really enjoy it,” he says. “There are all kinds of historic details that inspire me, and I even adapt them in my work.” And that’s a lesson his university tutors would most certainly approve.

A version of this article appeared in the July 1 2015 issue of Hamptons Cottages & Gardens with the headline: Art-Filled Abode.