Pure Zen on the Connecticut Coast

A new take on the modern farmhouse exudes a sense of calm. 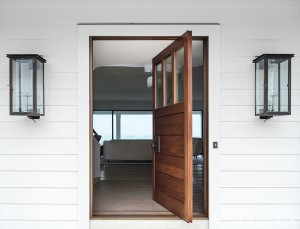 Asked to describe the style of their domicile, the owners of this Darien home offer a litany of possibilities—Amish, Scandinavian and Zen among them. And while the exact descriptor eludes them, the specifics of what they wanted when they set out to build on their waterfront property did not. “I grew up in a modern glass house, so harsh lines were out,” says the wife, who instead sought soft edges and organic materials more in keeping with the Amish/Scandinavian concept. For the husband, the emphasis was on the Zen. “The design needed to exude a sense of calm,” he says.

Having raised three children in a home nearby, acquiring this property with unfettered views of Long Island Sound was the culmination of a lifelong dream to live on the water, and they turned to architectural designer Louise Brooks and architect Vincent Falotico of Brooks & Falotico. After much consideration, the notion of an updated farmhouse emerged as a baseline. “The pared-down modern farmhouse concept was becoming popular in the area,” says Brooks, who selected white shingle and vertical siding with window frames painted to match to give the building a quiet countenance. In answer to the wife’s request for stonework that resembled what you’d see in Chester County, PA, where she grew up, one section of the house is covered in brown and taupe stonework causing it to resemble what might have been a stand-alone building in the past.

Upon approach, a substantial four-foot-wide wood door pivots open to reveal a curving staircase fashioned from hand-troweled plaster. Following a purposeful trajectory, the sculptural element hugs rather than obscures views of the Sound and distant lighthouse. “The walls are also plastered and the corners are slightly radiused, which provides a natural segue to the staircase,” says Falotico, noting the oak finish on the door is matched to the cerused finish on the floor.

In response to the wife’s “keep it soft” mantra, interior designer Janet Zachar filled the stairwell with an assemblage of rounded white mesh pendants in varying shapes and sizes. “It’s a very organic-looking group that works well with the lines of the stair,” says Zachar, who followed up with furnishings that bend and bow as well. In the living room, for example, the curvature of the white sofa complements the swerves of the black egg armchairs and round walnut coffee table. “The rug is a swirl of pale blues, light taupes and creams, and has the feel of the sea,” she adds about the plush layer. 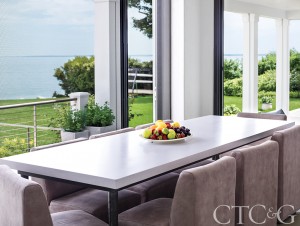 Barrel chairs surrounding a shagreen dining room table supported by two round pedestals harken back to the circular theme, and a preponderance of neutral tones throughout keep the eye moving out to the surrounding vistas. “Nothing screams at you or distracts you from looking at the water,” says Zachar, who also admits to a notable exception. “The wife loves orange and wanted it incorporated somewhere in the house.” A lacquered orange and white French Toulet pool table in the bar area was one answer to that request.

But the homeowner’s affection for bright colors didn’t stop there. Landscape designers Kathryn Herman and Stephanie Rustici peppered the front property with yellow witch hazel and red fothergilla, while lining a pathway that leads to the kitchen with orange Stella d’Oro daylilies and like colored nasturtiums. “There is no stiff structured plant material. Everything is relaxed,” says Rustici, who continued the vibe with a water feature that starts with a lily pond before spilling over into a protected sitting area accessed from both the basement rec room and the upper level pool and patio. “They wanted the sound of water everywhere,” adds Herman. 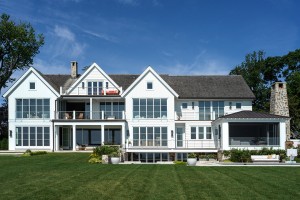 According to Brooks, the landscape provided the perfect complement to the home design while also punctuating the Zen quality the owners sought. “They routinely keep all the doors open so they can hear the calm, trickling sound of the water,” she says. “It’s the icing on the cake.”

The print version of this article appeared with the headline: Pure Zen.

Waterfront Bermuda Home Will Soon Go to Auction with No Reserve

With some whimsical pirate-themed decor, this house may have appealed more to a ship enthusiast than a car racing fan.

This SoHo spread is a sleek urban oasis where buyers' outdoor living dreams can come true.