Putting All the Pieces Together

Gabriela de la Vega turns workaday beads into beautiful baubles in her mini jewel box located in Bed-Stuy. De la Vega keeps a passel of vintage jewelry in her studio, which provides inspiration for her own bedazzled works.

The three rooms on the third floor of Gabriela de la Vega’s Bedford-Stuyvesant brownstone play very different parts. Part one: her older son’s man cave–cum-bedroom, separated by original pocket doors. Part two: her artist husband’s studio, a den-like space splattered with paint and littered with canvases. Part three: her own workspace in a small anteroom—though de la Vega, a jewelry designer, insists it gets the best light in the house.

Inside de la Vega’s mini jewel box, a small, narrow desk propped up against a wall holds a passel of vintage jewelry, which provides inspiration for her own work, primarily pieces created from beads, stones, and wire. For the self-taught designer, whose collection has been carried in Barneys New York and many other high-end department stores across the country, she says it’s all she needs.

“When I first began dabbling in jewelry, I was working at my kitchen table,” says de la Vega, who started out by reconfiguring antique pieces before turning her attention to creating her own unique designs. “I always had to pack up my work in boxes when I was done each day, but now everything is out in the open so I can see it all at once. I work better that way.” Over time her creations have attained cult status from jewelry lovers drawn to her line’s organic shapes, semi-precious stones, and sophisticated draping of chains. “I knew absolutely nothing about production and was flying by the seat of my pants, but within a year of making my first piece, Barneys picked up my entire collection. It was like a fairytale.” 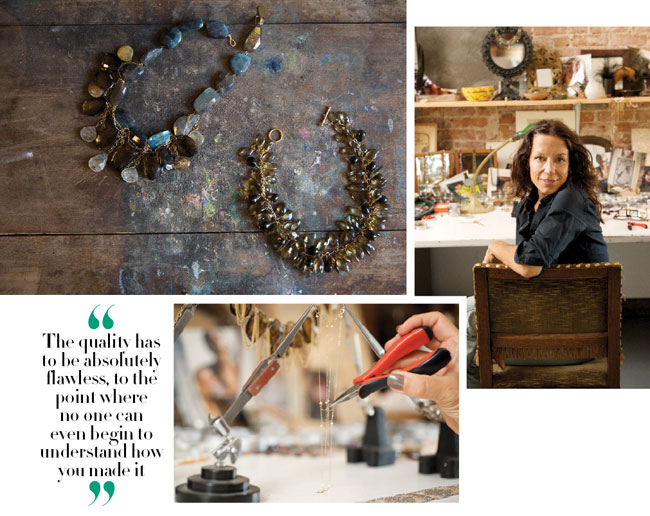 Today de la Vega sells her wares in the popular hybrid home accessories and fashion boutique Mrs. Robertson, in Fort Greene, which she co-owns with business partner Hilary Robertson. Describing herself as a low-tech designer, de la Vega says her strengths lie in her technique—she employs only a few simple tools, like wire cutters and tweezers—and her use of colored stones. Each item is built organically, often with little thought behind the construction, so that it “grows” in and of itself. “A piece has to be beautiful in order for it to work,” she says. “The quality has to be absolutely flawless, to the point where no one can even begin to understand how you made it.”

De la Vega begins with a single stone, laying it out among other materials, as if trying to fit a puzzle together, and then integrates chains for proper draping. Once she decides on the right look, she starts with single swaths of chain and begins to incorporate other components. “I like to work on three or four pieces simultaneously,” she says. “I’ll often get to a place on one where I don’t know what I should do next, so I’ll leave it and concentrate on something completely different. This gives me a chance to look at everything with a fresh eye.”