Helen Gifford lights up the Hamptons

In 1999, Helen Gifford made a life-changing decision. For her furniture-design final at New York’s Parsons School of Design, instead of the standard miniature model of a chair or ottoman, she chose to create a light fixture.

Gifford has been passionate about light since childhood, when she was transfixed by the play of light and shadow on the various landscapes where she grew up (born in England, she lived in Borneo and Canada before moving to the U.S.). But the Northern Lights, which she saw for the first time on a fishing trip to Newfoundland at age 17, actually made her dream of light. “That incredible natural phenomenon was unlike anything I’d seen, or have seen since,” she says.

While at Parsons, under the tutelage of professor and designer Lyn Godley, Gifford started putting her ideas on paper, ultimately designing her first Urchin light fixture for that all-important final project. Encouraged by a panel of Parsons alums to pursue lighting design, Gifford took photographs of her work to her favorite New York studios. “It paid to be kind of naïve,” she recalls. “I just really didn’t think I wouldn’t be successful.” The now-closed shop Troy in SoHo took her on.

At the same time Gifford and a classmate took a booth at the annual International Contemporary Furniture Fair, where she made her first sale to L.A.-based Plug Lighting. From there, requests from Hollywood and society clients on both coasts started to pour in. Still bartending at night at Café Luxembourg, she decided to give notice: “It was time to sink or swim.”

High Wire Act | Gifford adjusts the wiring on one of her ceiling fixtures (above left) A Warm Glow | A piece from her Bolhas Collection (above right top), inspired by the bubbly drink from Reims, France. Close-up | Detail of wire frame (above right bottom).

In 2005, after a scheduling mix-up with her armature manufacturer left a seven-foot piece commissioned by the W hotel on a Manhattan street overnight, Gifford realized it was time to find new digs for her growing company, HelenBilt. “I decided HelenBilt was either moving to a roomy loft in Brooklyn or to the beach,” she says. The Hamptons suited her better. 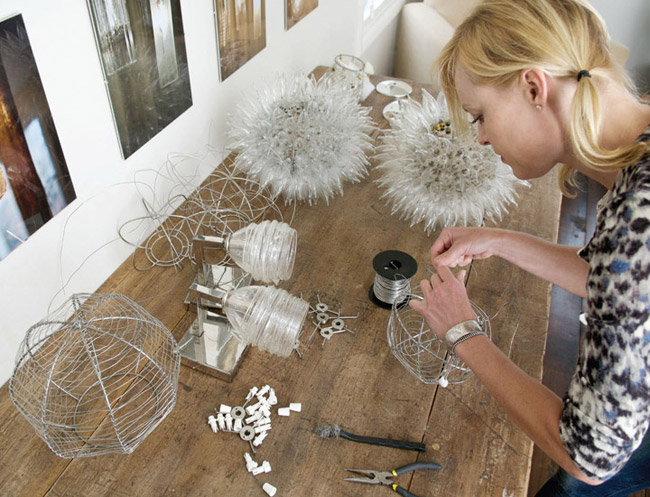 Custom Wiring | Gifford builds the frames for her Urchin Collection.

Most of her light fixtures are made and manufactured in the Hamptons, where she works out of her home/studio in Sag Harbor. She builds her entire Urchin collection by hand, using chandelier bulbs (the kind that certain states have recently outlawed in new construction) for the decorative exterior, and then illuminates the interior with a single source—an incandescent or compact fluorescent bulb. She also incorporates recycled glass and steel into her hand-blown pieces, and does a lot of her own non-UL wiring. “Working in the Hamptons is rewarding in all the obvious ways,” says Gifford. “More important, I grew up in places surrounded by water, so being here full-time feels right.”