If one celebrity owner means a home is special, then two celebrity owners in a row must confirm its A-list status. This stunning Mediterranean-style manse is one such esteemed property with serious music industry cred. Rapper French Montana bought the enchanting Calabasas mansion from Selena Gomez in 2016, and now it is up for sale seeking $6.599 million.

With an idyllic blend of inviting, relaxed style and glamorous spaces for entertaining, it’s no wonder the home has drawn in big-name buyers. Each bringing their own style, French Montana added his flair to the abode with remodeling that ranged from simply repainting to adding a top-of-the-line recording studio in the guesthouse. These renovations may be why the price tag jumped considering he only paid Gomez $3.3 million for it, according to the LA Times. 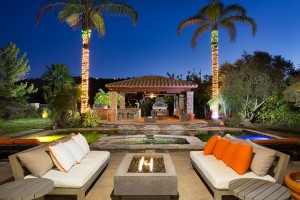 Dripping with amenities, the 7,800-square-foot residence has everything one needs to throw a buzz-worthy VIP bash. There’s a two-story great room, chef’s kitchen, movie theater, wine cellar, and ample lounge space outside. Nothing will be as luxurious as cooling off poolside in a cabana while lunch cooks in the outdoor pizza oven. Pizza and endless sunshine, could life get any better?

Perhaps following in the footsteps of stars with house-flipping side hustles, such as Diane Keaton and Tyler Perry, Selena Gomez has listed homes from Texas to Studio City in the past few years. Although, after just releasing her new album “Rare”, her real estate moves seem to be on the backburner.

In the midst of award season, the legendary star has had a sweet win away from the limelight with this sale.