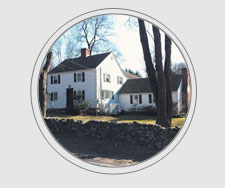 Called the Henry Munroe House, this circa-1805 home (left) is “one of the few 19th-century dwellings
documented as being built by a free black,” according to Westport Historic District Commission records. Just before the holidays, its current owners filed an application for a demolition permit. The Historic District Commission imposed a 180-day waiting period rather than issuing a permit—a stop-gap measure designed to give the community time to come up with an alternative plan. For one success story, Westporters need only look across the street: the historic farmhouse at 113 Cross Highway—a one-time gas station—faced demolition in 2006, was purchased, lovingly restored and given an Historic District Commission Preservation Award.

Spring is coming and with it the season of rebirth and renewal—as well as home renovation. Everywhere, homeowners are breaking ground on additions, new kitchens and other projects, in hopes of turning their dream-home ideals into reality. So it’s only fitting that the houses featured this month have been restored (a modern icon preserved!), reinvented (a circa-1780 Rhode Island home reconstructed in Darien!) or, simply, thoughtfully renovated. On the real estate calendar, spring is also high season for open houses, so take full advantage—it’s a great way to see somespectacular interiors and, in truth, the only (legal) means of getting inside homes you love without an invitation.

Bridgewater Antique
$1,695,000
This circa-1850s farmhouse was not only gut-renovated but its owners also commissioned antique-barn specialist Ed Cady to create a gorgeous, barn-style addition, expanding the interiors to 3,357 square feet. The salvaged and antique materials used throughout are period-perfect, from the hand-hewn beams to the wide-board floors, held in place with square nails. The new, lofty master suite is in the barn addition and takes full advantage of the vaulted ceilings and views over the four-acre property. In the fabulous bathroom: a slipper-style soaking tub, a steam shower and floor tiles fashioned from reclaimed slate. In all, there are five bedrooms and three bathrooms (and one half bathroom); plus there’s a separate renovated barn on the property that can be transformed into a party space or additional guest rooms. Stacey Matthews of The Matthews Group, affiliated with William Raveis Real Estate in Washington, has the listing. 860-868-9066. 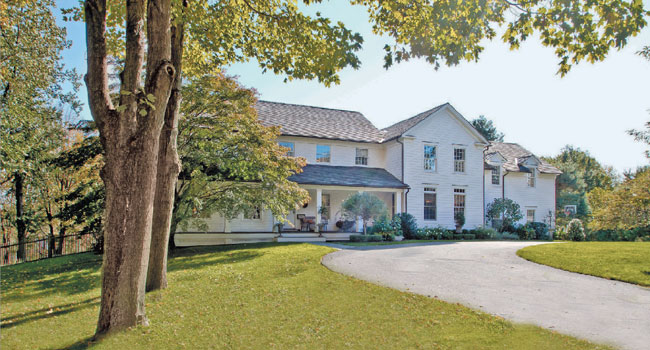 Beachside Common Compound
$2,475,000
Westport
It’s safe to say that few buyers specifically request to look at homes built in the 1970s—as yet, the styles that characterized that decade have no particular cachet. The owners of this 5,100-square-foot home entirely reinvented the circa-1979 property they purchased, transforming it into the best of all worlds: an homage to a New England farmhouse but with entirely updated amenities and appliances. To give the home its rustic glamour, antique pieces were sourced and incorporated. In the living room, there’s an ornate 18th-century mantel rescued from northern Connecticut; in the dining room, an early 19th-century hutch serves as a built-in cabinet. There are also 200-year-old hand-hewn beams from Pennsylvania and handmade hardware on board-and-batten doors. Look in the kitchen for the new stuff—a Sub-Zero refrigerator/freezer; a restaurant-quality, five-burner stove and two dishwashers, one of which is in the second pantry. The setting is amazing too, with views onto New Creek and easy access to Long Island Sound. Michelle Genovesi of Michelle & Company in Westport has the listing. 203-454-4663. 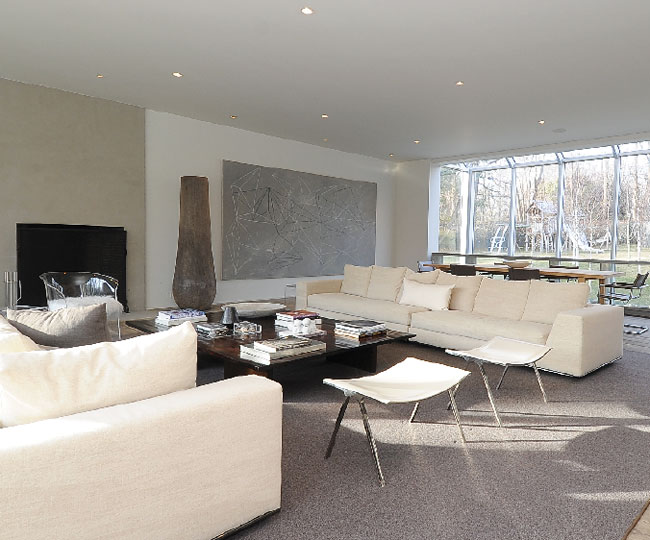 Westport Antique
$4,850,000
When Westport-based interior designer Mar Silver bought this circa-1810 home, it was a traditional Colonial-era farmhouse—but with loads of potential for transformation. Along with architect André Tchelistcheff, Silver settled on a scheme featuring large, open-plan rooms that allow light to pour in through skylights and the 20-foot wall of floor-to-ceiling glass doors that link the family room to the pool patio outside. Glass sliding doors are also used as a transparent partition between the dining area and the living room. (The home was featured in “Artistic License” in March 2010, CTC&G.) Silver put the home on the market several years ago and it sold readily. And now the 7,850-square-foot residence is back on the market, as stylish and sophisticated as ever. It offers five bedrooms and six bathrooms, plus a beautifully landscaped 1.68-acre lot. Leslie Smith Clarke of William Raveis Real Estate in Westport has the listing. 203-984-1856. 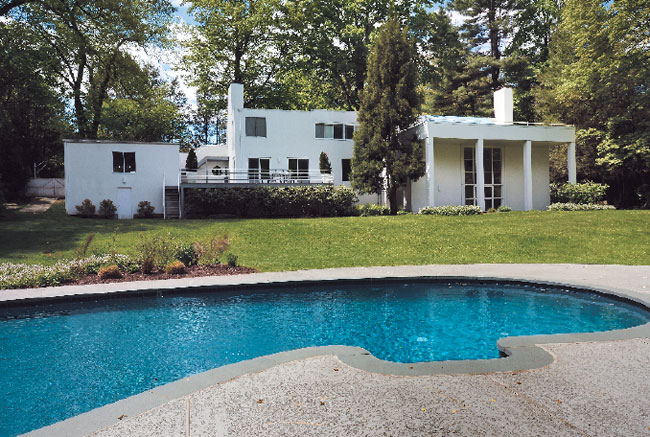 Edward Durrell Stone Home
$2,295,000
Darien
An early American proponent of modern architecture, Edward Durrell Stone is best known for his cultural and civic buildings: He was the principal designer of Radio City Music Hall, the Museum of Modern Art (MoMA) and the Kennedy Center in Washington, D.C. The architect also built a few homes in his day—Nelson Rockefeller was a client—including a New Canaan residence designed to showcase the then-futuristic synthetic materials manufactured by the Celanese Company. Still called The Celanese House, that home was put on the market several years ago, intact but neglected, and sat for a long while until a new, preservation-minded owner restored it, right down to its period-appropriate dimmer switches. This Darien dwelling, built by Stone in 1938, has also benefited from a careful renovation. Stone was commissioned for it—about the same time he was awarded the opportunity to design MoMA—by a wealthy couple who were patrons of all things modern. The story goes that both Alexander Calder and the Chilean artist Roberto Matta created pieces for the home. The current owners invested more than $1 million in updating the mechanicals, installing new floors and windows and reconfiguring the kitchen. Today it offers 4,268 square feet, including four bedrooms and five bathrooms, as well as a wine cellar and, on the 1.62-acre property, a renovated pool and terrace. Eileen Hanford of Halstead Property in Darien has the listing. 203-253-0995. 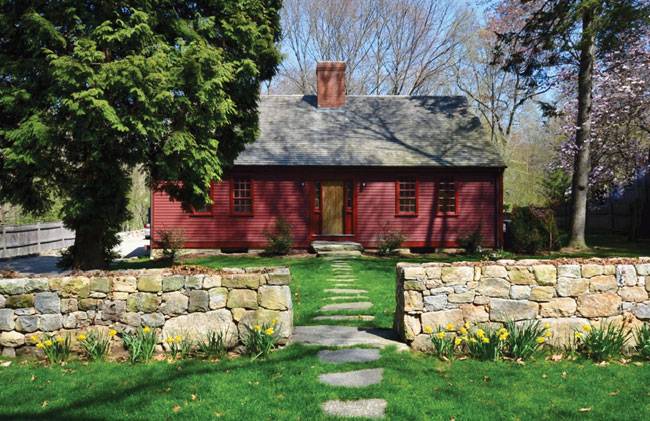 Darien Cottage
$1,249,500
This charmingly hand-hewn Cape started life in 1780 in Rhode Island, where it was later dismantled and piled up in labeled pieces. Its current owner stumbled upon the pile, inquired and bought the deconstructed home for $25,000. She then put the place back together on a piece of property her mother owned on Fairmead Road in Darien. Expanded to 3,088 square feet, the home retained its original hearth, antique paneling and handmade beams. It offers three bedrooms, three bathrooms, an office, a study, and fireplaces in the dining, living and kitchen. Suzanne Okie of Halstead Property in Darien has the listing. 203-856-9719.