For More Than Three Decades, Richard Galef Has Been Transforming 57 Hardscrabble Acres in the Wilds of Craryville, New York, into a Xanadu of Staggering Natural Beauty 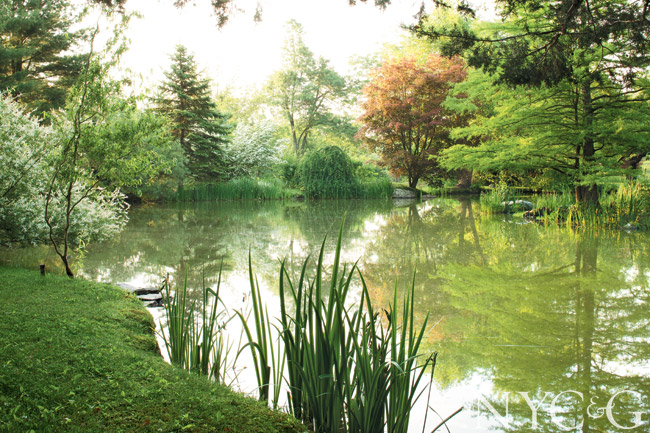 The Little Pond
Other homeowners might greet incoming guests with grand entry gates, linden allées, or crouching whippets, but Richard Galef decided on a pond instead. Prompted by nothing more than a mudhole hidden in a bramble tangled woods, the idea literally sprang up when he stumbled on a telling ring of stones that a local farmer identified as a cattle seep. All Galef had to hear was, “You could dig a pond here,” to be off and running with excavating equipment. The beautifully carved body of water reflects a layer of deciduous trees and conifers bedded in iris and moisture loving plants, embracing everyone who arrives with open arms. 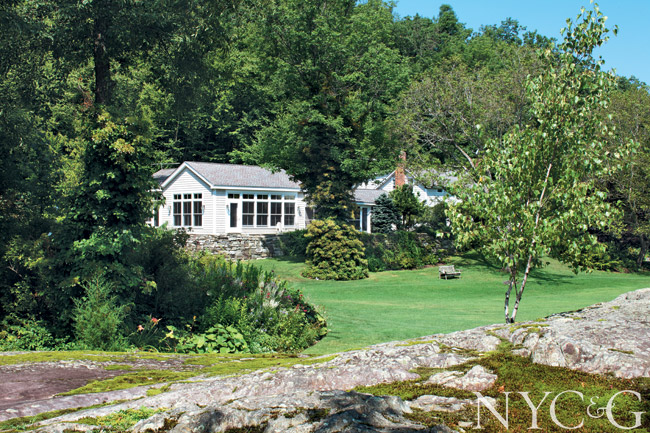 Moby Dick
“I was totally against unearthing the ledge next to the house,” says Galef’s wife, Susan Anthony, “until I saw that it was brilliant.” And who could blame her for doubting her husband as he first began to excavate the hillside by hand? He started with a chainsaw—sure that a view of the Berkshires was hidden somewhere behind the copse of scrub tree then attacked the concealing impediment with a spade, bringing in a backhoe “every three to four years” to lay it bare. Five years of manual labor later, the wonderfully whale shaped, hulking rock exposes a phenomenal view of Massachusetts. Over time, the stone has weathered, and Galef has planted water-lily ponds in the clefts where rain collects. “It’s now my favorite space in the garden,” he says. 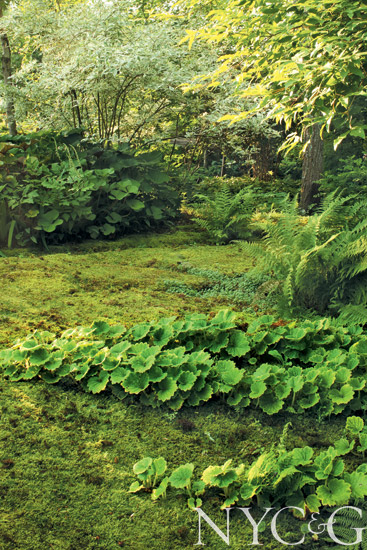 Moss Garden
Deep in the core of Galef’s sculpted forest lies a hidden moss garden. A study in textural interplay, it is a soft green clearing in the woods with primroses and ferns sprouting from a plush green carpet underfoot, a lovely liaison with the moss creeping over the adjacent Moby Dick ledge. 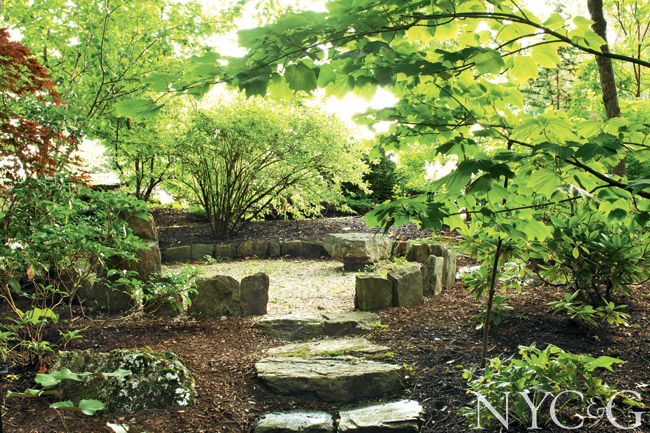 The Meditation Circle
Fifteen years after its creation, Richard Galef cannot talk about his meditation circle without fighting back tears. Tucked into the woods as a memorial to a son who died in 2000, it is a monument to the loss of a beloved life. Eloquent in its stark simplicity, the circle is surrounded by upright stones and bedded in gravel with greenery all around. A sitting stone comforts anyone who tarries, and attention is directed toward an upright stone that’s “meant to symbolize a figurative tombstone and focus your concentration on the reason why the circle was created.” This is all Galef can manage to say without dissolving. 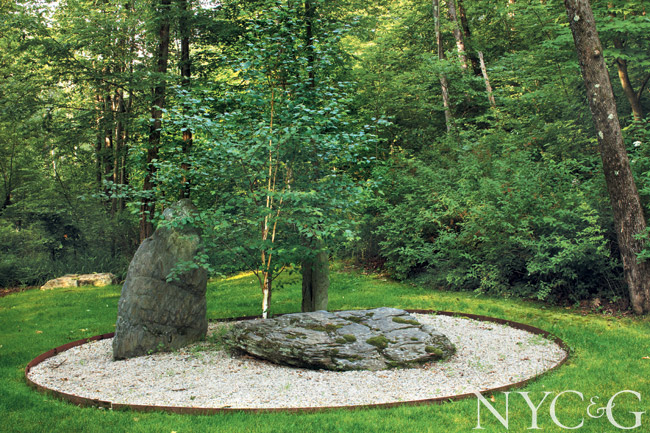 The Stone Circle
In a setting of fluid lines and natural spaces, Galef took a leap with the perfectly round stone circle. “I’m aware that it’s a jump,” he admits, “but it makes you pay attention.” Corralled in metal edging and bedded with white gravel, the stones were hand-picked from far ends of the property for their reverential dialogue with a Himalayan birch, Betula utilis var. jacquemontii. 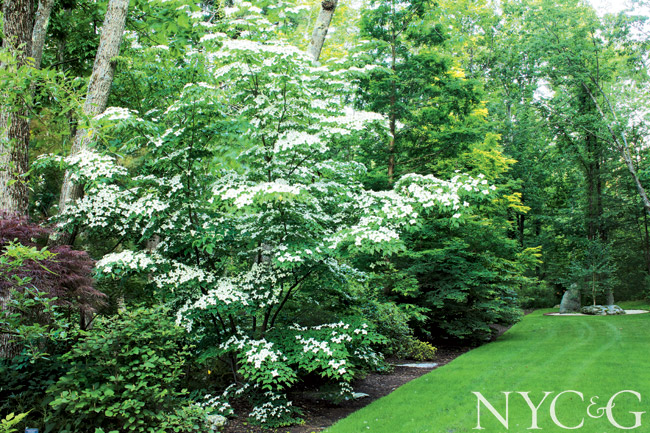 The Allée
The compliment Richard Galef cherishes most came from a visitor who emerged from the woodland into this angular allée and audibly drew in her breath with awe. (“It’s always a wonderful shock,” he says.) The allée was originally the stone yard, where rocks were stored for selection while Galef was creating the initial walls and paths around the house. The open space that remained once the rocks were all assigned was given razor-sharp edging as a counterpoint against the seeming wildness of the woods. Now groomed double-file viburnum and spruce bask in the sunbeams. 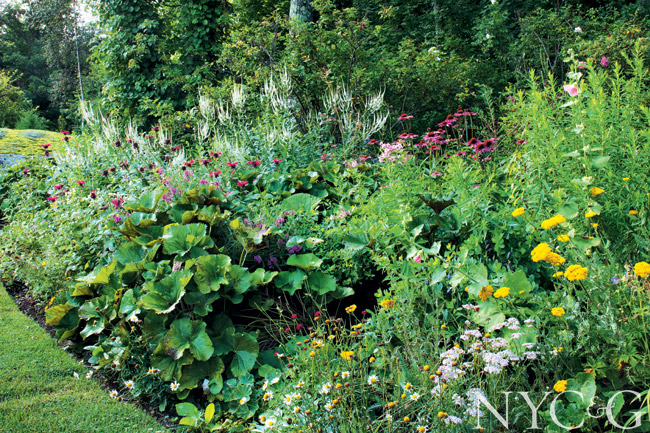 The Main Perennial Bed
Although Galef is content with a steady diet of green, he is perfectly willing to let his wife indulge her passion for color in perennial beds. In wide borders, she creates voluptuous layers, exploring a petal’s hues against the shade in a leaf’s underside or echoing the golden tone of a flower’s throat against another plant’s chartreuse foliage. 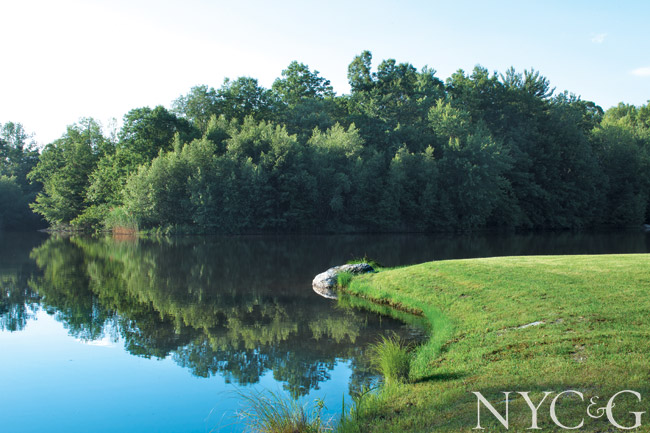 The Lake
There’s no way Galef would be content with a swamp in his domain. “The lake wasn’t always a swamp, because it was filled with hundreds of dead trees,” he says, adding that someone had once dug a modest but telling swimming hole at one end. So he went to work dredging a five-acre lake, which “turned out to be very simple when we hit an underground spring. It filled up in a month.” Besides a few boulders inserted poetically into the water, he left it open, manicuring the grass banks that slip seamlessly into the depths. Surely, this is what nature would do—with a little help from its friends.

A version of this article appeared in the March 2015 issue of New York Cottages & Gardens with the headline: Upstate Oasis.