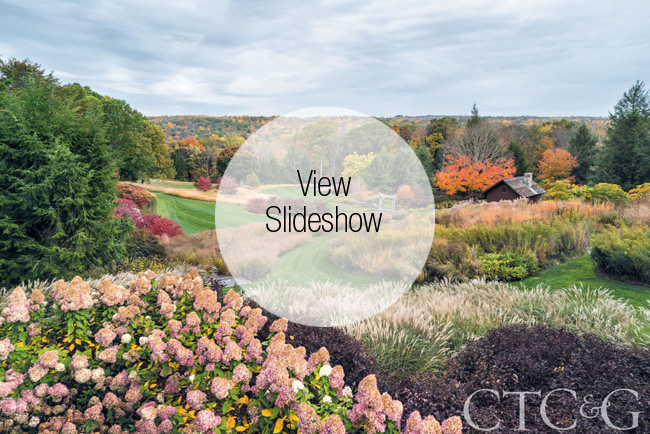 It is near impossible to convey the sensual gorgeousness and fun of InSitu, an eight-acre tour de force in Redding.  This is a garden of motion and light, capable to taking one’s breath away with broad sinuous drifts of plantings—250,000 plugs of grasses, goldenrods and black-eyed Susans—punctuated with surprising, dynamic works of art.

The garden is the result of a 12-year collaboration between owner Mike Marocco, an art collector who’d never had a garden before, and renowned landscape architect Richard Hartlage. Marocco saw the designer’s work in a friend’s New Jersey garden, where art was integrated into every outdoor space. That Hartlage was based out of Seattle was not a problem; he generally spends about one week every month tending to projects on the East Coast.

The duo began by organizing the spaces around the house, carving out terraces and building arbors, pools and living spaces. Then, they started moving down the hillside.

“There are two main themes at work here,” says Marocco. “The first was to have large areas of one plant that go on for hundreds of feet [the immersive ‘wow’ effect], and second, to have a series of different outdoor rooms, each self-contained with a purpose.” Almost every space contains a distinct water feature—a birdbath, fountain or swimming pool—and art pieces are carefully positioned throughout. Marocco found a work of six-foot polished-steel pillars at Art Basel Miami. Set outdoors on a green lawn bordered by planes of black mondo grass and dwarf purple wigela, the multifaceted pillars mirror the view and viewer in unexpected ways, while casting long shadows and bright bars of light onto the lawn.

With 15 years of experience managing public gardens, and as director of horticulture at two arboretums, Hartlage has a remarkable knowledge of plants and plant varieties. “People are surprised to hear this garden was not done as a master plan,” he says. “We opened up the site and let the garden evolve, in pieces, over time.” The subtle movement of the grasses and water features combined with the grand built elements create a palpable dynamism. It’s almost like standing inside a kaleidoscope.

Keeping the site in perfect form is gardener John Kuczo. “Richard Hartlage did an unbelievable job picking plants for their different levels and textures. But Mike and I still tweak it,” says Kuczo. And it’s a constant battle. “Almost every plant is super aggressive,” he continues. “The grasses all started as plugs. Now they all want to spread, spread, spread.”

This garden’s distinctness is the result of successful partnership between a client with a strong personal style and a designer and gardener, who capably translate and elevate that style into its own work of art. In fact, InSitu is featured on the cover of Hartlage’s latest book, The Authentic Garden, published by Monacelli Press. Adding to that authenticity are the masonry walls built with stone from the site. Even the bluestone came from a nearby quarry. The arbors are from a family mill across the border in New York. Once a year, Marocco lets the public in to see the garden and recently has begun to open it for charitable events.

It’s a rare garden that builds throughout the entire growing cycle to fan out in one great crescendo of movement, color, fullness and glory. But that’s what happens at InSitu, when the grasses are at their fullest and the maple grove turns scarlet. “In mid October, I look down on the meadow moving in the wind,” notes Kuczo. “It looks like it’s on fire; even for me, it’s unbelievable.”

A version of this article appeared in the November 2015 issue of Connecticut Cottages & Gardens with the headline: The Sculpted Landscape.