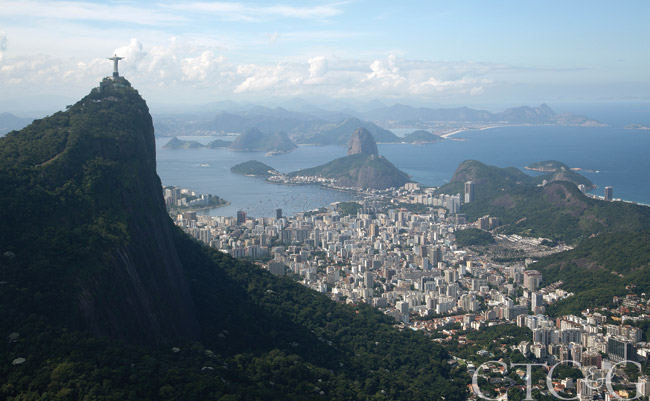 In Rio de Janeiro, anyone out and about at 4 a.m. is more than likely still up from the night before. But not me. I woke up bright and early to make it to the city’s iconic Christ the Redeemer statue by sunrise. Now, at the top of Corcovado Mountain, with the arms of the soaring, stone-carved Jesus stretched out above me, I watch the city come alive more than 2,000 feet below.

This verdant panorama notwithstanding, the most impressive aspect of my crack-of-dawn Corcovado trip may well be the silence. During regular hours, selfie-taking strangers pack the plaza and viewing platform surrounding the statue. But I’m enjoying the sunrise, as well as a picnic-style gourmet breakfast, with just a handful of fellow guests from Rio’s grand dame Belle Époque hotel, the Belmond Copacabana Palace, which has secured this unprecedented early-morning private access exclusively for its guests.

What the hotel calls its “Corcovado Experience” proves the perfect entrée to enjoying Rio’s greener side. From here, I go by safari-style open-top jeep into the depths of densely tropical Tijuca, whose nearly 8,000 acres—most of them reforested after having been cleared for coffee plantations in the 1800s—include some 130,000 species of plants, 30 waterfalls, hiking trails aplenty and what our guide describes as “more biodiversity than the Amazon.” Throughout our drive, I marvel at towering slabs of stone dripping with vines and bromeliads, and trees whose shiny leaves of Jurassic proportions jockey for space. We spot a long-billed toucan here, an impossibly large yellow butterfly there.

Elsewhere in the city, gardens by famed 20th-century Brazilian landscape designer Roberto Burle Marx beckon, not least of all the city’s largest park, Aterro do Flamengo, whose 300 highly planned acres skirt the beach. Now part of Tijuca, the manicured lawns and fountains of Parque Lage, originally designed in a romantic style in the mid-19th century by Englishman John Tyndale, surround an Italianate private villa turned school of visual art.

I finish my day in the palm-lined allées of the city’s all-but-empty botanical gardens. Pausing to admire an ornate tiered fountain, I look up to find Christ the Redeemer perfectly framed by a break in the trees. His outstretched arms stand ready and waiting to welcome the day’s sunset, just as they did that phenomenal sunrise. 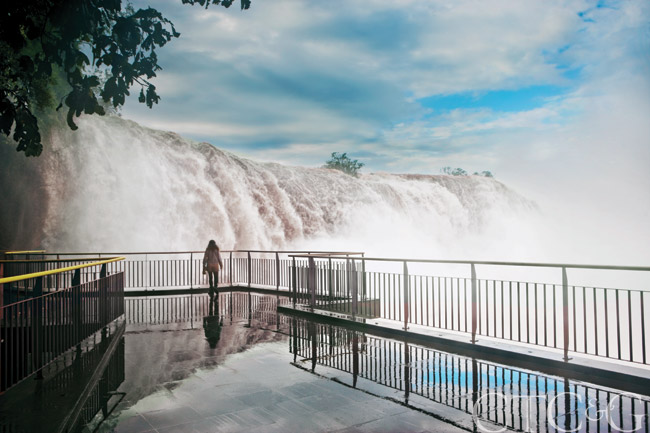 Belmond Hotel das Cataratas, an easy two-hour flight from Rio, is the only resort within the borders of the Brazilian national park that’s home to the hundreds of cascades comprising the three-mile-long Iguazu Falls, over which more than 2.5 million gallons of water flow every second. Built in the style of a colonial estancia, the pink-hued stucco structure holds pride of place at the trailhead to the horseshoe-shaped, 270-foot-high Devil’s Throat Falls (shown at left), which means guests not only enjoy waterfall views from many of the hotel’s recently refurbished rooms and public spaces, they can also walk along a lush jungle path to see the falls before the park opens to the public and after it closes. The hotel arranges trips deeper into the jungle, too, with access to the base of the falls by Zodiac speedboats. belmond.com.

Corcovado Experience
Available only to the Belmond Copacabana Palace hotel’s guests, this early-morning adventure brings you up close and personal with the city’s Christ the Redeemer statue for a private sunrise picnic at the monument’s base. belmond.com.

Jardim Botânico
Founded in 1808, Rio’s relatively unknown but beautifully landscaped 340-acre botanical garden features more than 8,000 species of plant life, including towering Imperial Palms lining many of its paths and a section entirely devoted to cacti and succulents. The nearby neighborhood named for the garden has recently sprouted a number of stylish boutiques, restaurants and cafés. jbrj.gov.br.

Copacabana Tropicalia Though it sits on the beach in the middle of town, the Copacabana Palace offers its share of green space, from the Italian ficus and Clusia of its porte-cochère and pool courtyard to the floral frescos and botanic prints of its interiors, recently redone by French designer Michel Jouannet. belmond.com.

A version of this article appeared in the May 2015 issue of Connecticut Cottages & Gardens with the headline: Rio's Greener Side.