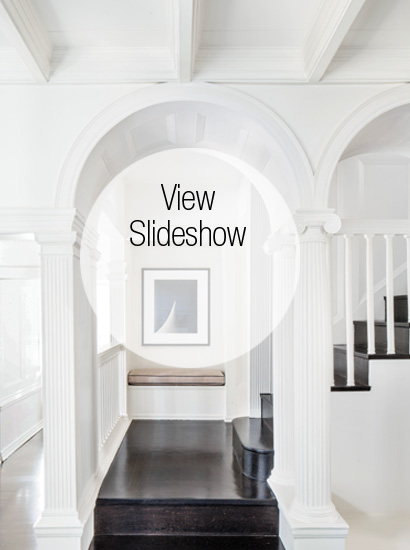 After stints living in Japan and on the East Coast, Roth Martin was “ready to call San Francisco home again,” says the native of the City by the Bay. For his maiden real estate purchase, he didn’t buy just any home. Following a nearly two-year search that entailed touring roughly 150 properties, in late 2001 Martin acquired an official landmark with a rich architectural backstory: the Atkinson-Escher house.

According to landmark preservation documents, the residence was built in 1853 for brick contractor Joseph H. Atkinson and is “purported by many to be one of the oldest standing houses in San Francisco.” It’s widely believed that architect William H. Ranlett designed the Italianate structure, which underwent interior renovations around the turn of the 20th century courtesy of architect Willis Jefferson Polk. The house survived the 1906 earthquake and fire, but 25 years later suffered significant damage when a fire broke out. Artist and designer Bruce Porter is credited with the reparations at that time.

“The house distinguishes itself like no other,” says Martin, who was drawn to its history, architecture and natural light. “The way it’s perched on Russian Hill is magnificent. And it has expanses of glass. With gardens on three sides, it’s surrounded by greenery; whatever is not greenery is city views.” The views encompass San Francisco Bay, Bay Bridge, Coit Tower and Transamerica Pyramid. “You wake up in sunshine every day,” he adds. Indeed, it’s so uncharacteristically warm and fog-free here—in a location known as “The Summit”—that Martin had air conditioning installed.

Outfitting the four-bedroom, four-bathroom home wasn’t a problem. “As a furniture dealer, you get to hold onto the pieces you favor most,” says Martin, a cofounder of San Francisco’s Hedge Gallery, which specializes in 20th- and 21st-century furniture and decorative arts. His business partner, interior designer Steven Volpe, also lent his talents to the décor; for instance, he helped select the paint color for Martin’s study (Benjamin Moore’s Deep Caviar).

Hedge opened in 2003, the same year that Martin and his wife, Emily, moved into the historic hilltop house as newlyweds. The couple has since welcomed four children, a brood that Martin affectionately calls “my team.” The island in the predominantly white, Carrara marble and stainless steel kitchen was enlarged to accommodate six Emeco stools.

In the living room, a spectacular walk-in fireplace stretches from the ebonized oak floors to the dropped crown molding, and the ceiling is characterized by carved wood beams that were introduced by Polk (and rumored to have come from a ship anchored in the Bay). These original 19th-century elements are paired with chic pieces including two blue linen-velvet sofas designed by Volpe and a pair of circa 1960s Maison Baguès metal console tables procured during Martin and Volpe’s first joint trip to Paris.

The dining room is anchored by a 12-foot walnut-and-stainless steel table of Martin’s own design surrounded by 10 highly coveted Hans Wegner chairs. The space also serves as a photography gallery lined with work by Melvin Sokolsky, Rodney Smith and a Reg Lancaster of Françoise Hardy.

A dwelling with such a pedigree could easily come across as stately and grand. But Martin points out that it’s a “very comfortable house”—no small matter considering that there are four inhabitants younger than 10. Martin’s godmother lives next door, and the kids often traverse the terrace to read and play with her. “It’s gratifying to be able to enjoy and share such a history with my children, given that I come from two families with San Francisco histories of their own,” says Martin, whose lineage includes Michael H. de Young, cofounder of the San Francisco Chronicle, and Captain William Matson, founder of Matson Navigation Company.  He adds, “People always seem to fall in love with the house regardless of the history.”

A version of this article appeared in the February 2015 issue of San Francisco Cottages & Gardens with the headline: The Living Gallery.