A look at unmissable events to plan for next season. 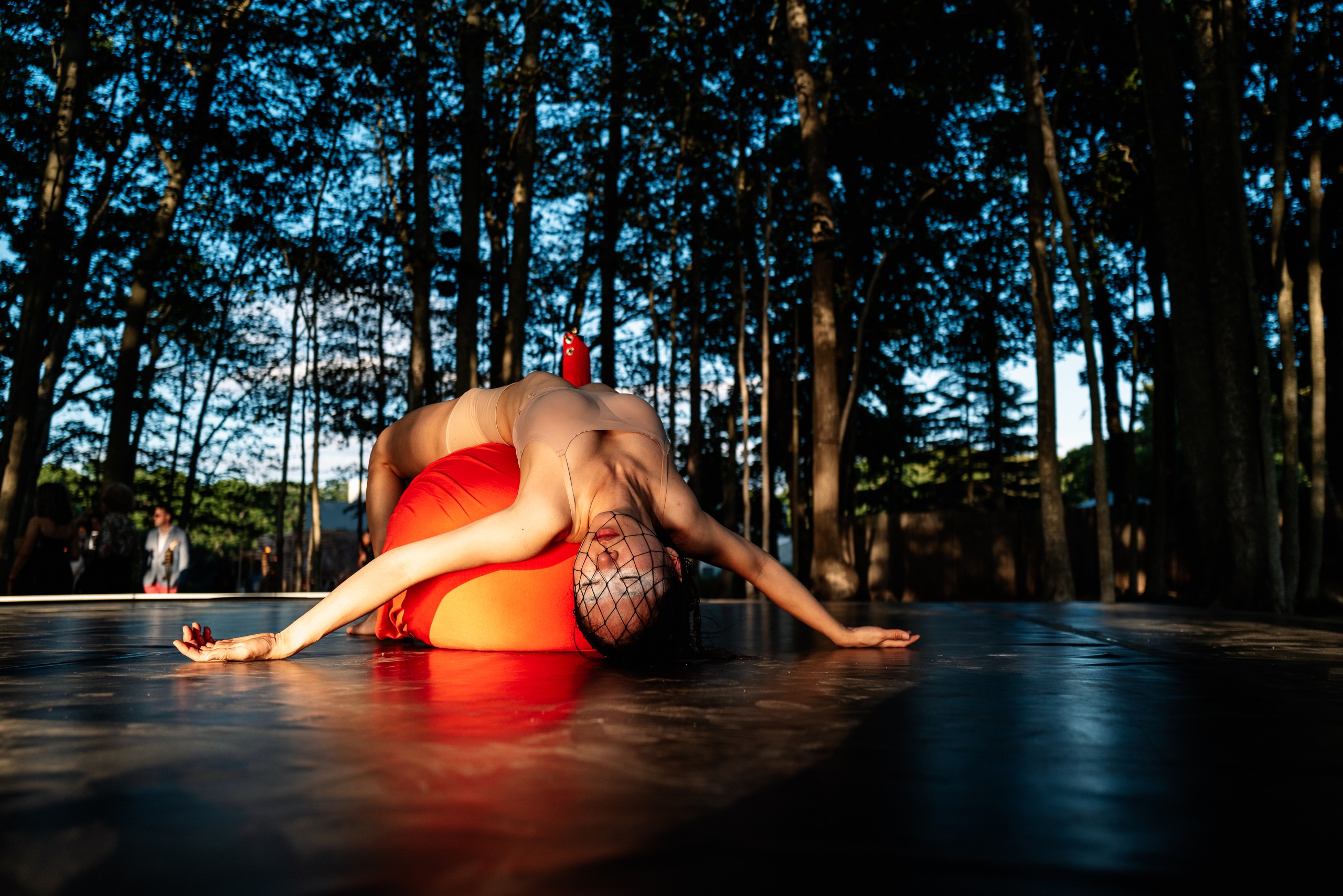 On a hot end of July evening, guests followed the torchlit path that led into the manicured grounds, gardens, museum, and woods of The Watermill Center, set on ten acres of Shinnecock ancestral lands.  Like at previous years’ benefits, the performances executed by individuals or small groups of artists were startling, disturbing, shocking, amusing, challenging, and always stimulating. The Watermill Center identifies as “an interdisciplinary laboratory for the arts and humanities.”

This year’s 30th anniversary event was themed STAND, a theatrical work in two acts presented by Van Cleef & Arpels. ACT I involved over 20 international artists contributing installations and performances. ACT II was a participatory installation called Pull and Raise created by Japanese artist-in- residence Tsubasa Kato. The inspiration for the STAND theme derived from English writer H.G. Well’s statement for renewal, “if you fell down yesterday, stand up today.” A heady theme for these unprecedented challenging times in the world. The final act involved the notion of standing together and participating to implement change. 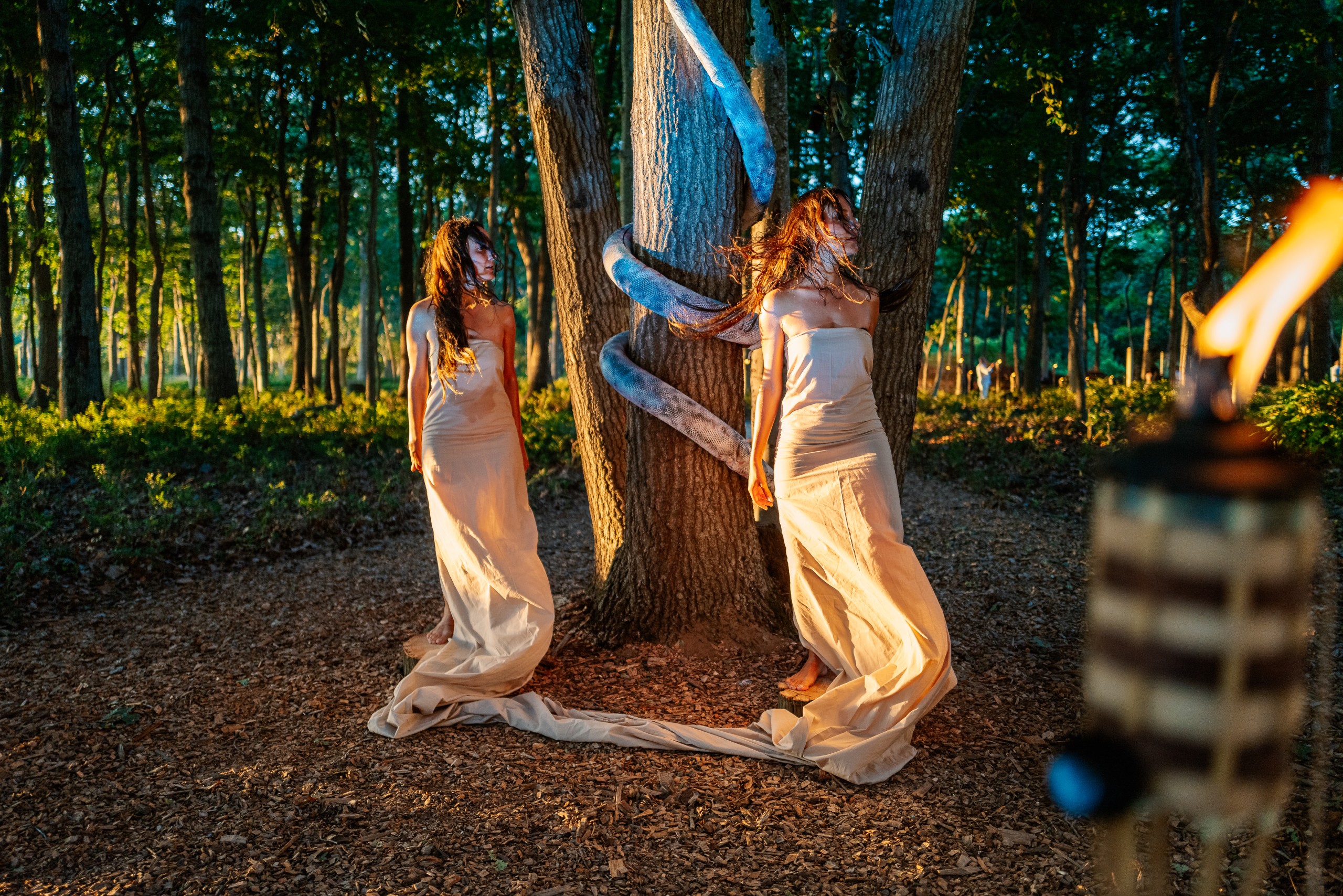 Along the entrance path to the museum, one of the first oddities to confront guests was a giant egg containing a man, only his head visible through a crack. The man wore an animal snout and greeted guests in an upbeat yet threating voice reminiscent of the “Bienvenu-welcome” in Cabaret. Further down the path, a man in a deep ditch grave, his head encased in a helmet contraption with tiny light bulbs, struggled to free himself by writhing from side to side.

As attendees climbed the stairs to the museum, strewn with high reeds and tiki torches, inside on a platform sat a woman wearing black garters and high heels with smoke steaming out of her private parts. The erotic and struggle themes continued as the procession of guests entered the deeper woods. A Garden of Eden drama unfolded with two young women, their bodies wrapped in white cloth, provocatively offering each other an apple, while a (faux) snake climbed and encircled a tree. Throughout the upper floors of the South wing, solo exhibition by Christopher Knowles, a returning alumni artist whose work is featured in The Center’s collections was on view, alongside works by Inga Maren Otto Fellow, Robert Nava. 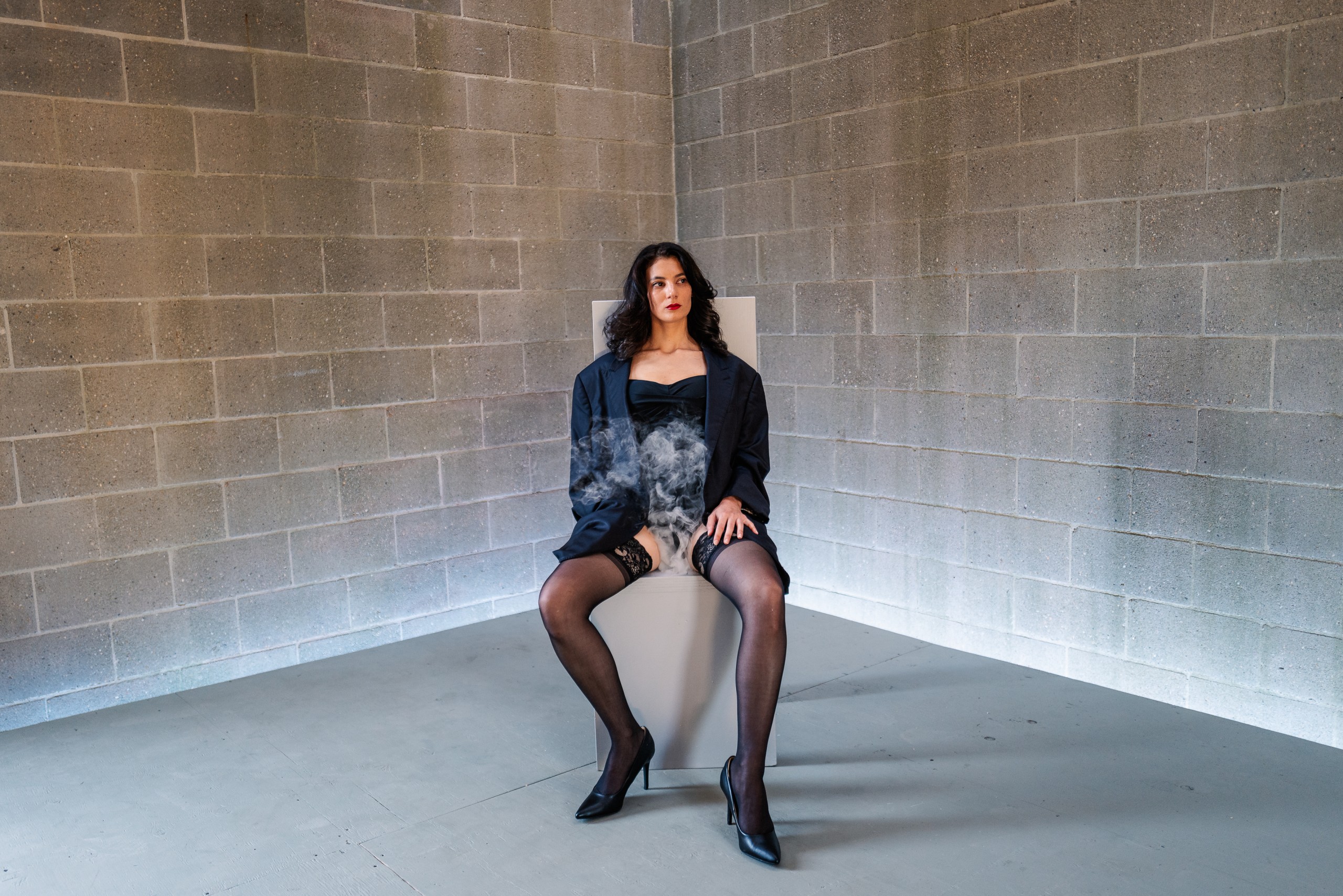 A woman dusted with clay, naked but for a small pantie, rolled or carried heavy rocks from one pile to another in a slow methodical struggle to move the rocks or pile them.  Performance artist Hollie Miller mesmerized the viewers with a silent performance that seemed to combine the Sisyphus myth—in which the king of Corinth is condemned to repeatedly roll a heavy rock up the hill in Hades only to have it roll down as it nears the peak–and a classic bondage and dominance practice of forcing enslaved females to pile heavy rocks.  Having performed as a dancer and artist all over the world, Miller writes in her artist’s statement, “I use my body as an activated and politicized site bringing charged materials to it to envisage ‘insideness’ and externalize subconscious.” 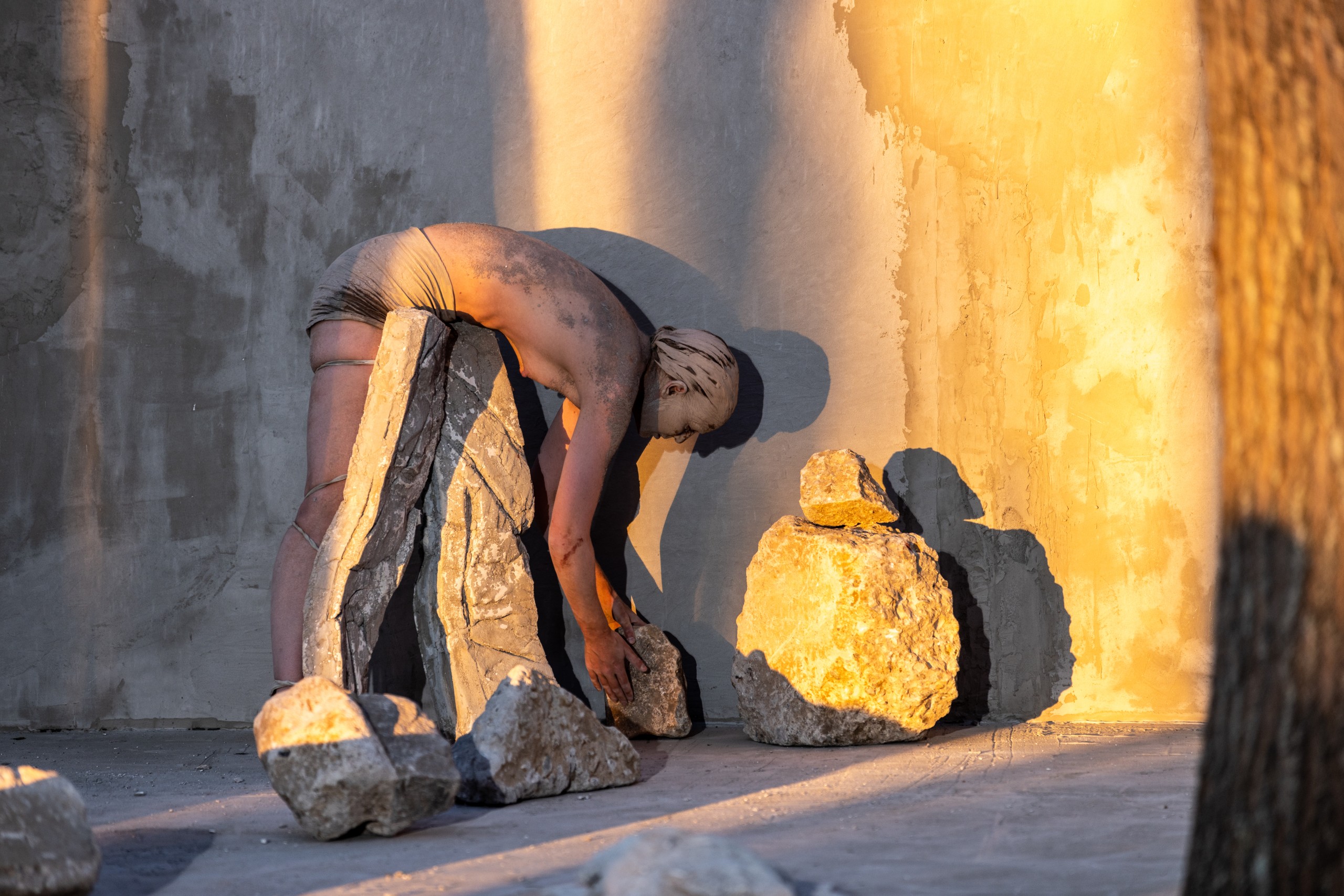 After experiencing ACT I, guests proceeded to the museum’s large lawn for a reception where chef Colin Ambrose of Estia’s Little Kitchen in Sag Harbor presented Mexican fare, beef, chicken and seafood tacos and outstanding fish and shellfish soup. The bar was limited to two brands: tequila cocktails made with Maestro Dobel and wines by Wölffer Estate.

Maestro Dobel tequila is produced by the Beckmann Family, who for 11th generations have owned Jose Cuervo. A super premium brand, Maestro Dobel is a unique blended tequila, which combines reposado, anejo and extra anejo, all aged  in European white oak barrels. After aging, the blend is created and then is filtered back to remove the color and it becomes transparent and clear like a silver. It’s the first multi-aged clear tequila, termed a cristalino– and it makes for seriously delicious cocktails. 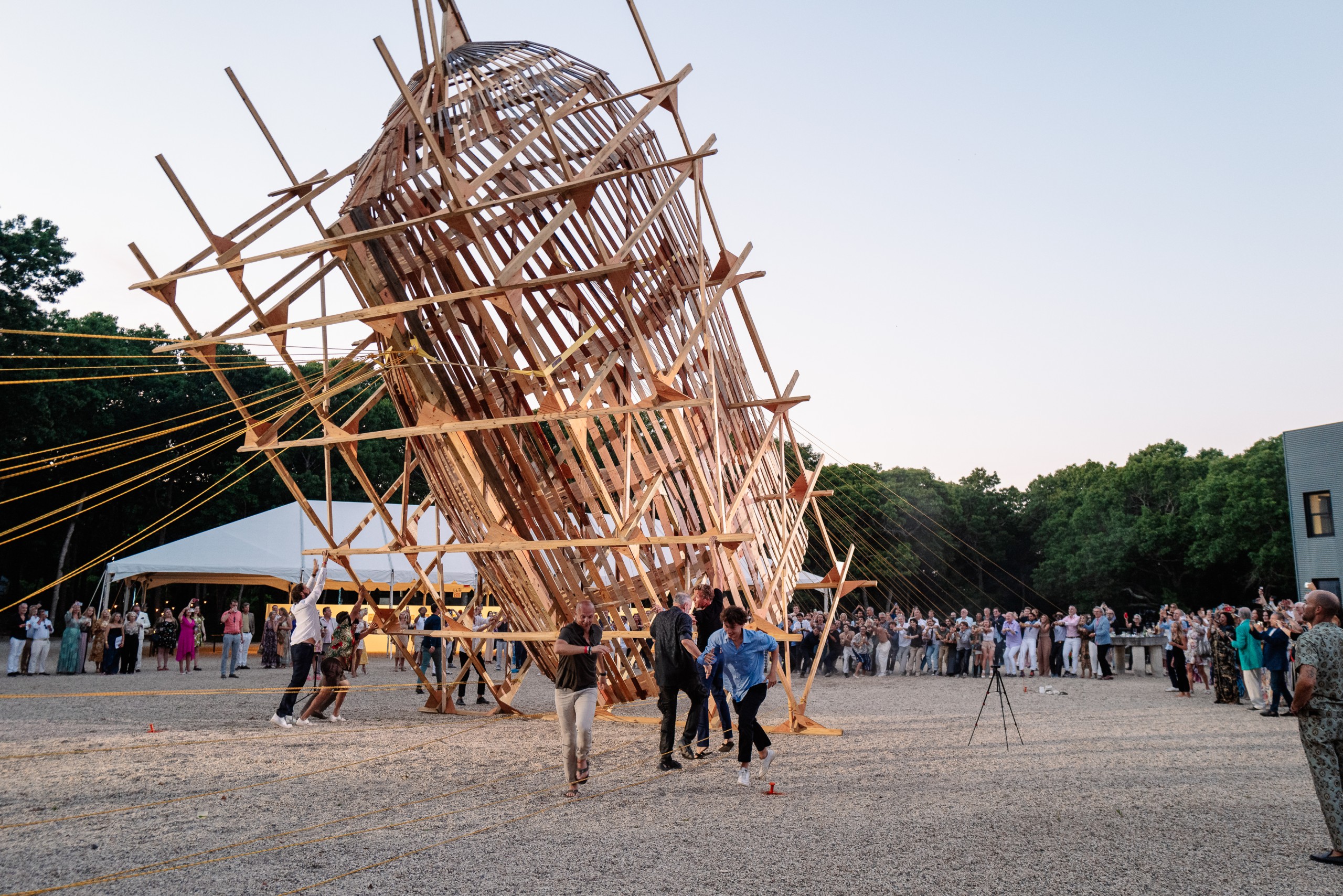 All gathered at a higher level of the property for the grand finale of ACT II, a monumental work called Manhattan Go created by Japanese performance artist Tsubasa Kato. Kato directed around fifty performers and guests to grab onto the many ropes with handles that emanated from the sculpture. To a ten-second countdown, the group started pulling the huge wooden structure, which was 20 feet high and looked like a skeleton of a ship or a frame of large home. They pulled and pulled, and the structure didn’t budge. The scene was reminiscent of Fitzcarraldo, the 1982 film directed by Werner Herzog, where the plot revolved around a group manually hauling a 320-ton steamship over a steep hill in the Amazon Basin. 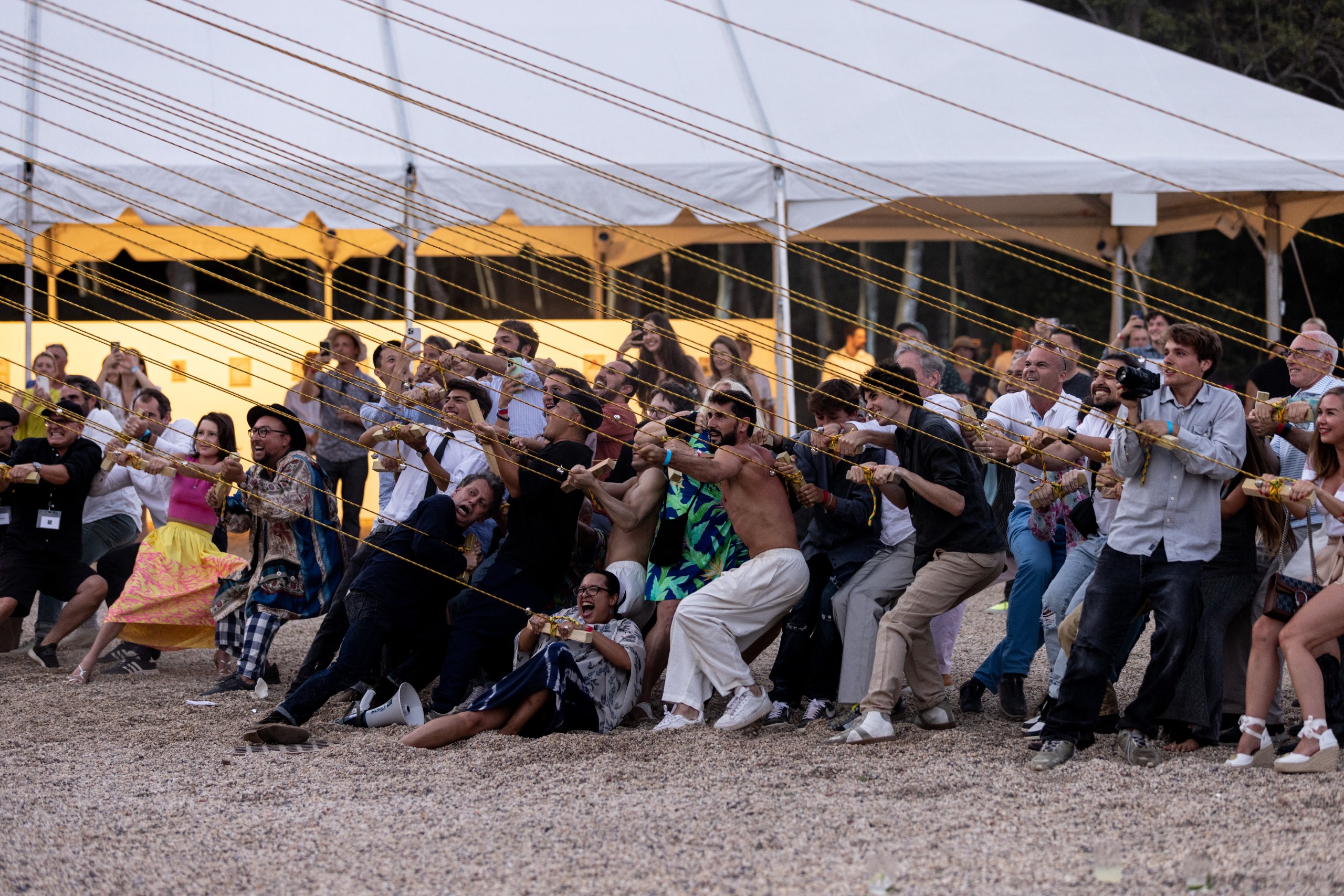 More people joined the pulling effort. Using a bull horn, Kato then urged other guests to push from the opposite side of the sculpture.  Finally, the group managed to tip the structure from horizontal to vertical—a proud achievement. As night fell, the lighted standing structure resembled a cathedral. The benefit supports The Center’s year-round programing supporting artist residencies and education programs.

Midsummer Dance at the Parrish Museum 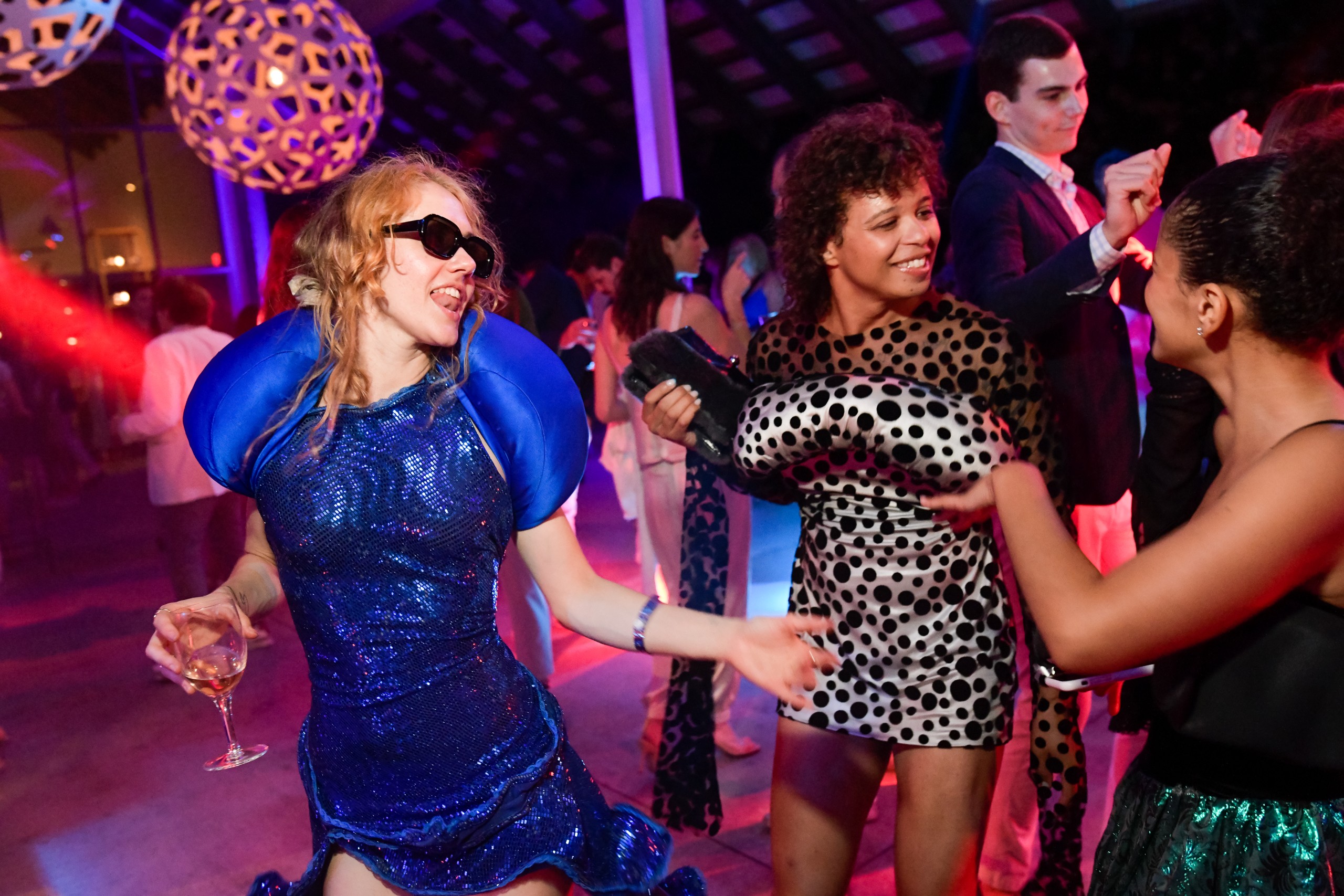 In this second installment of the Midsummer Dance party held under the pronounced eaves of the Parrish Museum in Water Mill, the young crowd danced with abandon to the hypnotic sounds from DJ Oscar Nn of Papi Juice. The sonic performance was accompanied by a fantastic light show that cast laser lights and sweeping design through the enormous front lawn and sculpture garden of the museum. It seemed as if the entire property was pulsating to the music.

Though no dress code was announced in advance, many guests intuited that coming to a contemporary art museum required outrageous artsy costumes. A theme somehow materialized with several women sporting travel inflatable neck pillows covered with whimsical materials either worn around their necks or along their bosoms. Many others took on the theme of micro-mini dresses or long skirts with thigh high slits. The Midsummer Dance certainly drew young sexy patrons.

Oscar Nn, who co-founded Papi Juice, calls his music a “blend of global and virtual urban genres with a queer sensibility” and he energized the party with his inspiring selection. He worked along with Papi Juice’s technologist, Adam R., to create the light show. He was introduced as he took his post at the DJ booth by the new museum director, Monica Ramirez-Montagut, who had started her position two weeks previously.

Champagne Nicolas Feuillatte was flowing. The brand, which is the youngest of the great champagne houses, comprises the oldest union of Champagne producers, a cooperative that represents 5000 vineyards in Chouilly.  Named for founder Nicolas Feuillatte, who I once met in Paris for the brand’s 30th anniversary event, the cuvée includes mostly grands crus and premieres crus grapes blended with precision and finesse. The highest selling Champagne across France for many years and known for its light and fresh style with persistent effervescence, this champagne is the perfect party bubbly.

The décor was the brainchild of event designer Frank Alexander NYC, who is known for transforming spaces into elegant, unexpected environments. He created a series of giant, metallic, crosshatched globes which hung overhead attached to the high eave ceilings over the dance floor and bars, which were all flooded in changing colored spotlights.

At the start of the party guests had the option of seeing the two museum exhibitions.  Set it Off featured an international roster of female artists with 50 works both in museum’s outdoor Meadow and the Parrish galleries, curated by “Deux Femmes Noires” (Racquel Chevremont and Mickalene Thomas). The exhibit showcased women who “set it off,” i.e. created bold statements with a “hurricane force” for change. The other large exhibition, An Art of Changes, Jasper Johns Prints, 1960-2018, covered six decades of Johns’s experiments with abstract and personal imagery with 70 works in lithography, woodcuts, screen printing and more. In recognition of Johns’s 90th birthday, the exciting exhibit was organized into four thematic sections as Johns recycles his key motifs over the decades—the American flag, numerals, and the English alphabet.

Oscar Nn finished up at around 11PM with dancers packing the dance floor till the very end. The Parrish Museum event (which included a sit-down dinner under the eaves the following night) raised around one million dollars that goes towards education, exhibitions and programs.

Dancing into the Night at the Samuel Waxman Gala 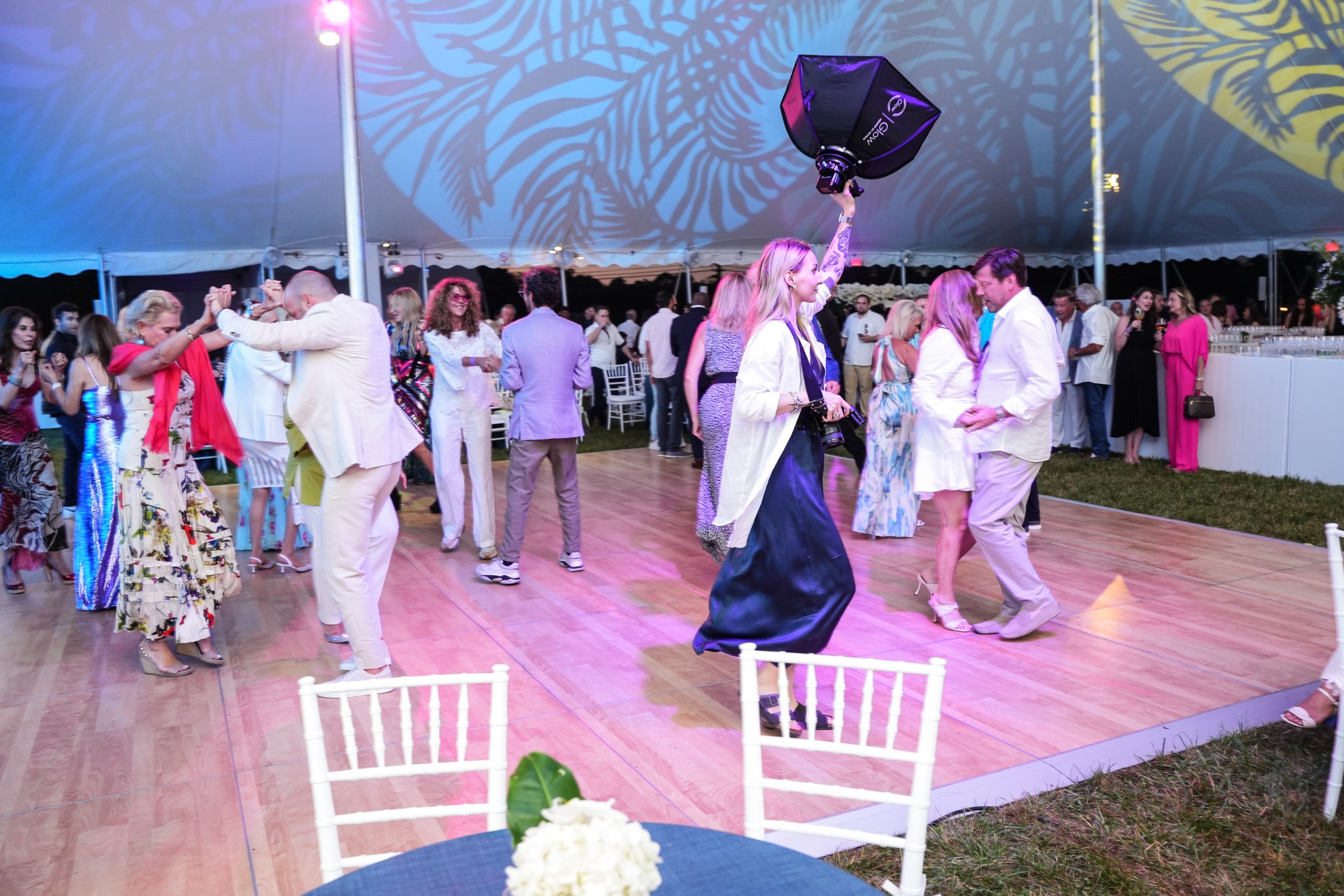 One of the worthiest Hamptons charities, The Samuel Waxman Cancer Research Foundation, is held under a white double tent in Bridgehampton. Now in its 18th installment, the event this year attracted three hundred guests and raised $400,000. The evening always starts as a lively cocktail party in the first tent and moves into the second larger tent for dinner, speeches, and a live auction, and culminates in a good hour of dancing on a huge dance floor.

The main drink sponsors had lively bottle displays, some on pyramid trolleys. The Kentucky Derby’s famous brand, Woodford Reserve, was out in force and guests enjoyed both bourbon cocktails and Woodford Reserve’s Straight Bourbon Whiskey, Double Oaked, and Malt Whiskey on the rocks. Also featured was Herradura tequila, which dubs itself “the extraordinary tequila” (and I agree) which made for some fine Margaritas.

A new Irish craft gin, Blood Monkey, was a new discovery for gin lovers. The name refers to the act of “bleeding the monkey,” when 17th century sailors drilled into the officer’s barrel to steal the liquor. Blood Monkey partners with West Cork Distillers and has Origin Green credentials, with bottles made from recycled glass and recyclable packaging.

And what would a Hamptons party be without rosé. Bridgehampton Breeze, made in the Hamptons, is a crisp, light rosé with a raspberry-strawberry profile. And Hampton Water, made in the South of France by renown winemaker Gérard Bertrand, is the celebrity brand launched in 2018 by Jon Bon Jovi and his sons, Jesse Bongiovi. A Grenache-dominant blend with Cinsault, Mourvèdre and Syrah, it’s seriously good and made Wine Spectator’s top 100 wines list.

Beyond drinks and culinary offerings, the real fun happens with the spirited dancing. Now in the third pandemic summer, people are more eager than ever to let loose, drinking and dancing the night away for a very good cause.