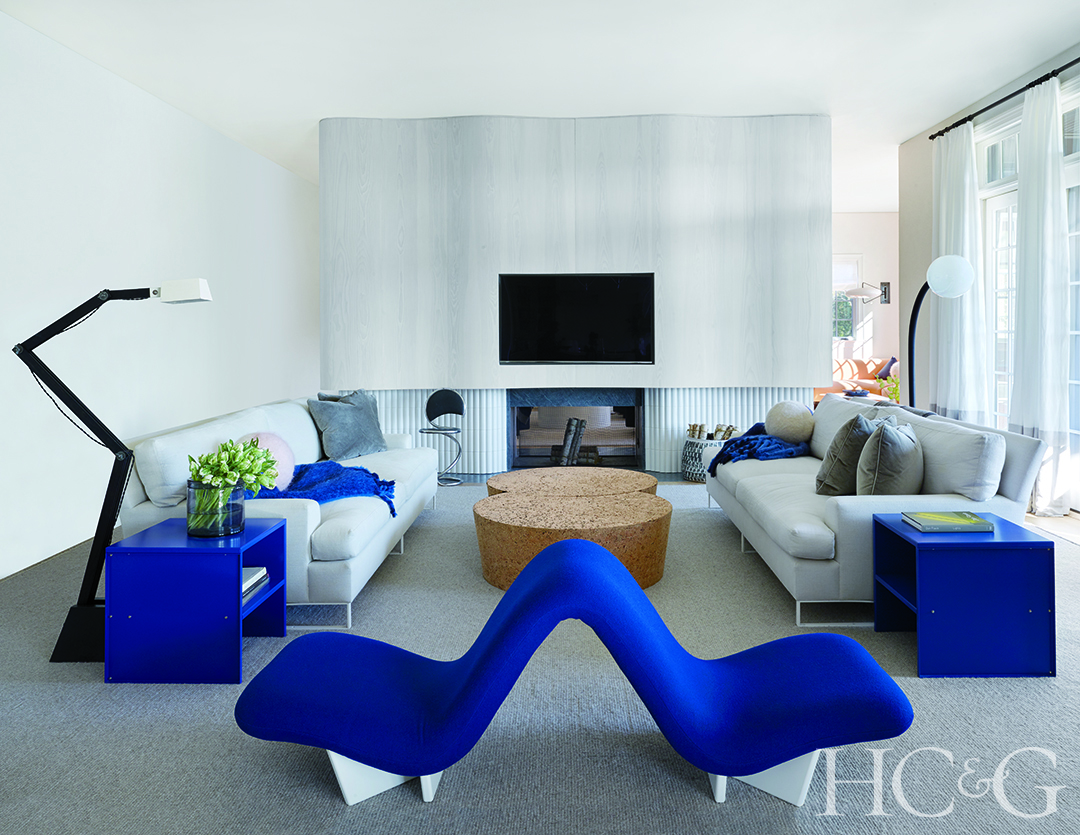 Building a new home from the ground up can be filled with challenges, but so can reinventing one that already exists. Interior designer Carol Egan faced the latter circumstance when longtime clients in Sagaponack, she says, “decided it was time for something new after living in their house for almost 15 years.”

Egan, a master of transformation, took on the charge with aplomb. Known for her curatorial eye and deep knowledge of comfortable materials—even when said material might be tempered steel—her sophisticated taste is energizing and unique. “We wanted the house to be fun,” explains the Dublin-born, New York– based designer, who is partial to neutrals but spun the color wheel with a bit more gusto this time around. “Most people find bold and unexpected color choices to be a lot of fun.” 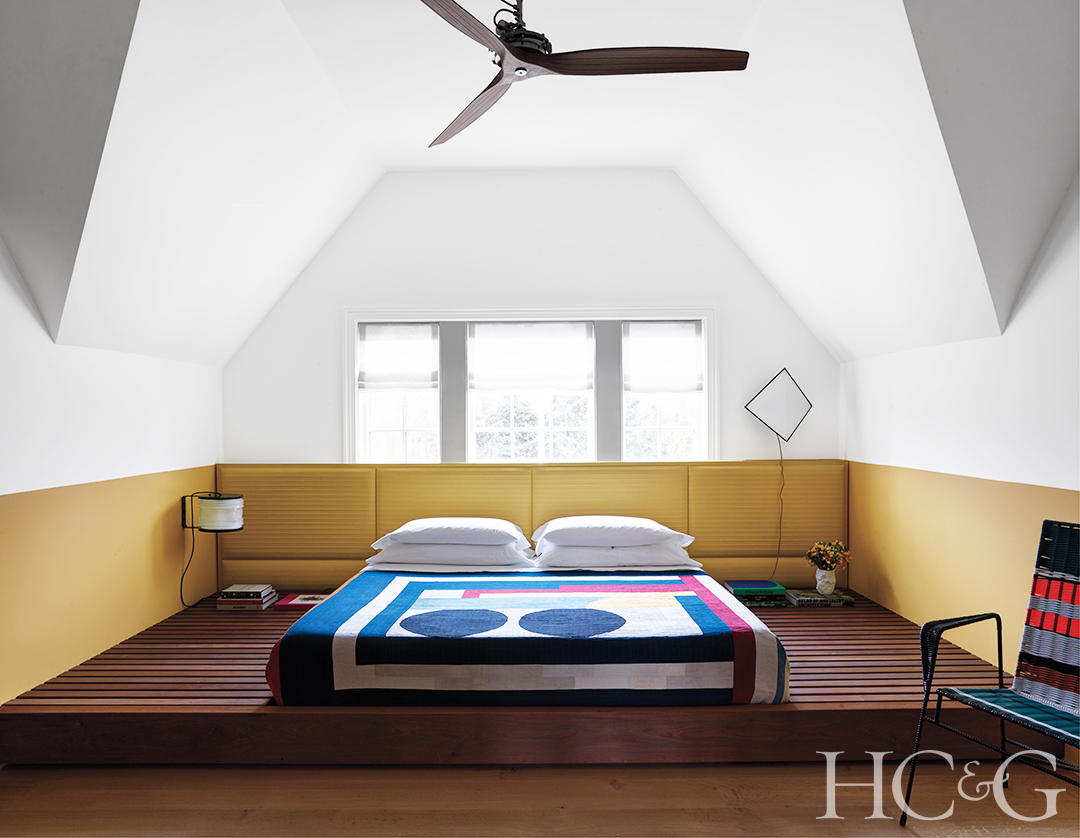 The 7,500-square-foot house, which the clients bought new in 2006, has six en suite bedrooms, a full basement, and a pool pavilion on 3.2 acres within smelling distance of the ocean. “It’s a typical shingle-style Hamptons home,” says Egan, who decided to upend any expectations about the interiors by making some notable adjustments to the exterior, painting the cedar shakes a non-Hamptons “deep indigo” and the trim a medium gray.

Another aim of the renovation: Make the house function better for frequent visits from close family members. “If the bedrooms are all full, as they often are on weekends in the summer, the common rooms can’t easily accommodate guests,” the designer says. “We went with a lot of banquettes for maximum seating and multiple indoor and outdoor tables and lounge areas.” Egan also broke down the hard division between the living room and adjacent library, creating a more open great room semi- separated by a two-sided fireplace in a floating wall of Douglas fir, a material put to extensive use in the revamp. She reclaimed some square footage by replacing one of the existing staircases with a sculptural version of her own design, and made everything light and airy by substituting wide planks of warm light oak for the house’s preexisting “dark Jacobean” floors.

The living room envelope was kept soft and neutral, thereby allowing the furniture to tell a vivid color story, notably via an Yves Klein blue in both a Pierre Paulin banquette and Donald Judd side tables. Egan left the kitchen and dining rooms intact, but enlivened them with pale dove-colored paint and new furniture and fixtures, including a chromed-brass Kinkeldey Studio “lighting structure” originally designed in 1970. It gives the kitchen a science lab vibe, whereas the Eric Schmitt Studio chandelier in the dining room harks to even earlier roots. “Whatever the architecture,” Egan muses, “you can update a room with a fresh coat of paint and a single statement piece.” 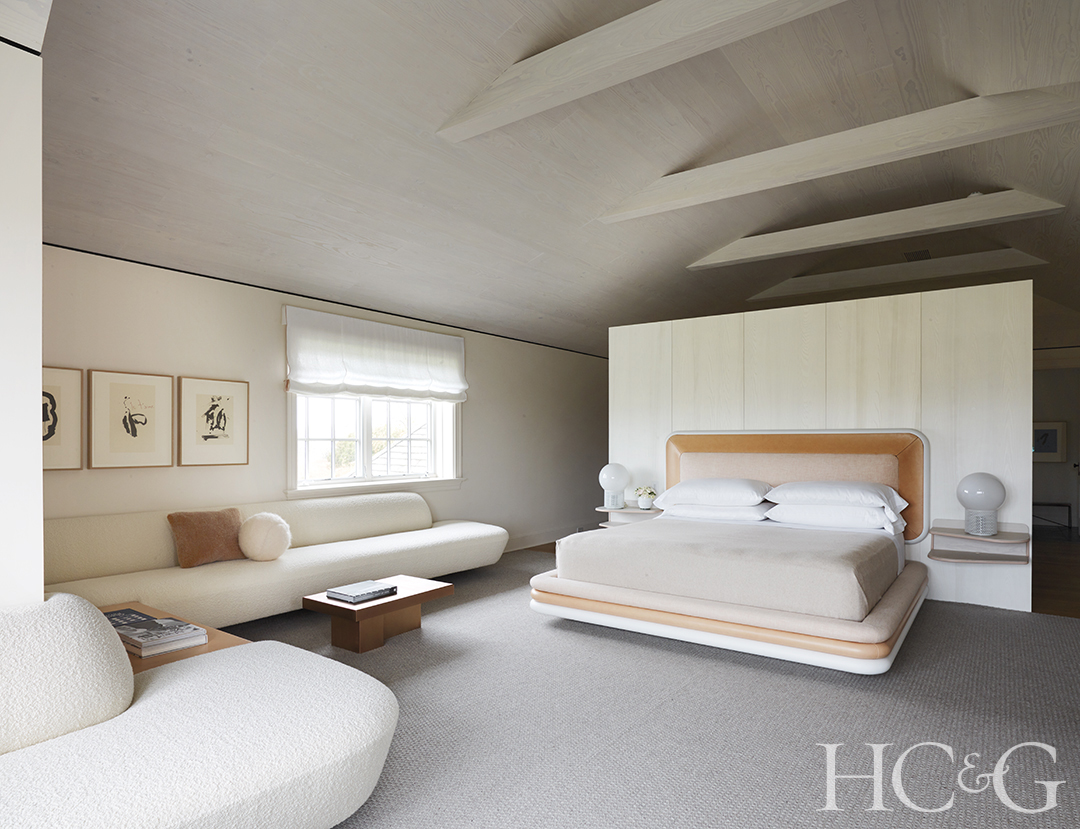 To expand and brighten the master suite, Egan raised the roof and added a large window, then bisected the room with a wall of Douglas fir, one side of which anchors the bed in the sleeping area, and the other a suite of closets and a commodious bath. Color-blocking plays an important role in defining the look of the guest rooms. One features a muted yellow leather headboard that is matched by “wainscoting” painted on the walls; a teal canvas wall treatment in another intentionally mirrors the custom bed and linens. In the terra-cotta-hued sitting room on the second floor, Egan wrapped one shade up the walls and across the ceiling, but switched to a darker tone below an imaginary chair rail. “Creating a wainscoting with paint brings more traditional architecture forward, allowing it to have greater harmony with modern furniture,” Egan says. “Color is a limitless world.”

The print version of this article appeared with the headline: Power Boost.