After a devastating hit-and-run accident in 1999 left him badly injured and unable to work, Damm found himself struggling with addiction and depression. While working slowly toward recovery in the years that followed, he began fabricating custom projects out of a shop in Wainscott, which he now shares with contractor Greg D’Angelo. He started experimenting, creating prototypes out of scrap wood from past jobs. “Something just clicked,” Damm says. “I discovered I truly love making furniture this way.”

At one point Damm’s girlfriend, Cindy Miller, who is also his business partner, commissioned him to replicate a costly dining set and credenza. Miller, herself a 25-year veteran of the furniture industry, was astounded by the results. She had a hunch that Mecox Gardens, the popular Hamptons home-furnishings store, would appreciate Damm’s work. Mecox took the furniture straight to the East Hampton branch’s selling floor.

While furniture designers typically devise plans and then procure materials, Damm does the opposite. He begins his projects by acquiring materials first: reclaimed wood, steel (often reclaimed too, but sometimes purchased new) and other supplies, such as recycled leather from vintage couches or a handle clipped off an old valise. In his eyes, seemingly nothing is considered waste. “Before now,” he muses, “I struggled to see the value in certain things, unnecessarily throwing them away.” 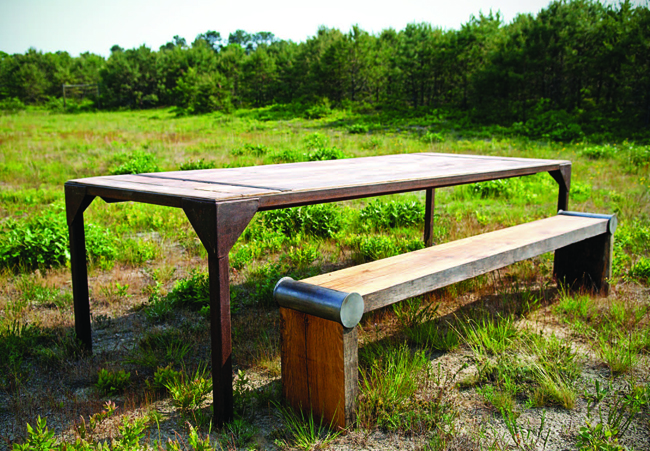 Shop Class | Damm scours the country to source and salvage woods and metals for his furniture pieces, in addition to other reclaimed materials, such as a handle from an old valise.

His original black-walnut designs include writing desks, dining tables and benches that take anywhere from five days to one week to complete. As for how far he’s come personally and professionally, he says, “Nearly every morning, I drive down to Atlantic Beach in Amagansett to watch the sun come up, and I think about how the worst thing that ever happened to me might actually have been the best thing.”